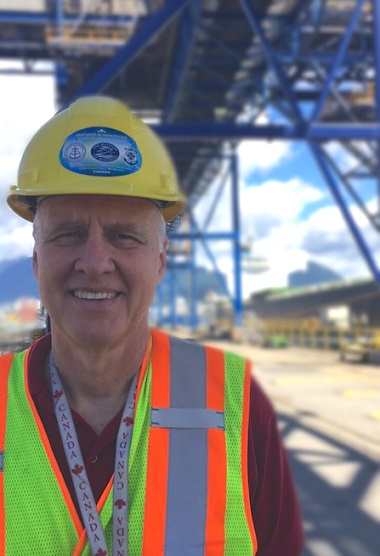 Gary Roosma serves as chaplain in the Port of Vancouver with the Ministry to Seafarers of the Christian Reformed Church.

“Some went down to the sea in ships, doing business on the great waters.” Psalm 107:23

Once while driving a group of seafarers back to their ship, the officer in the seat beside me gasped as we approached the gangway with the ship towering overhead. “Wow, she looks so big from here! But when we’re at sea, we’re like a tiny speck on that vast ocean.”

Seafarers do have a real sense of perspective when it comes to the world and our place in it. Unfortunately, because of their relative ‘hiddenness’ from much of our world due to isolation at sea and on board, they also often begin to feel a bit like disrespected cogs in the wheel of the maritime industry and broader economy. 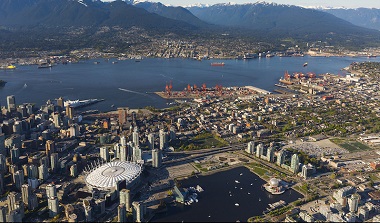 The Port of Vancouver is the busiest in all of Canada, with over 3,000 ships every year at its 29 major marine terminals. Vancouver Fraser Port Authority photo archives

In Maritime ministry we speak of sea blindness. A few generations ago most people would have known someone involved in maritime service, whether with the navy, coast guard or merchant vessels. But these days most of us from the West have little connection with the sea, except possibly with our own pleasure craft or local ferries.

Most seafarers now hail from Asia and Eastern Europe. Here in Vancouver, we regularly see the freighters anchored off the shores of English Bay or other nearby anchorages, but the port itself remains largely unseen behind security fences.

Few of us have any real comprehension of what life at sea is like. And yet, the seas and the shipping industry play a huge role in our lives. It is estimated that 90 percent of the goods we acquire and consume come to us by way of the sea. Even if the finished product is manufactured here (say, for example, a car assembled in Ontario), most of the parts come from elsewhere.

It’s easy to rail and protest against the shipping industry, but it’s our consumption that necessitates it. And it is the seafarers who provide the service that brings us those goods and who transport the natural resources that we export to keep our economy ticking.

The Port of Vancouver is the busiest in all of Canada, with over 3,000 ships passing through the port every year. It is also the most diverse port in North America in terms of the freight that comes in and goes out through its 29 major marine terminals.

With an average of 20 – 25 crew members on cargo ships and many, many more on the cruise ships, thousands of seafarers pass through our port every year. They come from all faith traditions; many are Christians. 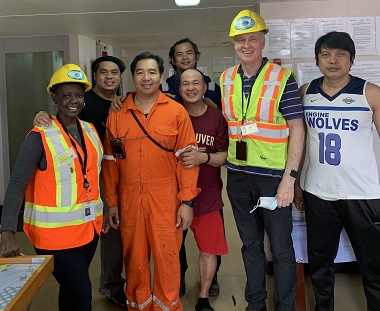 Gary Roosma and Ministry to Seafarers intern Georgia Omwa (left) with crew members on board a ship.

A few years ago, I was at our downtown seafarers’ centre on a dark, cold, wet December evening. A couple of local Filipina women had come to our centre to meet up with a couple of the crew from a ship that had recently arrived – the four were former classmates back in the Philippines.

When the two crew members arrived, they warmly greeted their friends. Then one of them turned to me and urgently inquired, “Where is your chapel?!” We have a lovely chapel here at the centre, and I quickly ushered him in.

He breathed in deeply and heaved a sigh as he removed his jacket and fell to his knees before the cross. I told him to take as long as he needed, but as I left the chapel I overheard him begin to pray, “Lord, thank you for bringing us through this voyage!”

Winter storms in the north Pacific can be fierce and harrowing. Two other crew members of another ship that arrived a while back were admitted to the psychiatric ward of a local hospital for trauma therapy – they were unable to continue working on the ship. Many crew members arrive here at port exhausted from days of little or no sleep due to the rough seas. Thankfully the summer season tends to bring calmer seas.

And it’s not just weather-related storms that they encounter. The recent war in Ukraine has impacted Ukrainian and Russian seafarers dramatically. Seafarers from Myanmar are deeply troubled by the current situation in their home country.

And everyday life continues with their families and friends back home while they are at sea. I once counseled an Indonesian seafarer whose one month old baby passed away without him knowing it while he was enroute to Vancouver – he only found out upon arrival here and had no funds to afford a trip back home.

Another seafarer once came to our centre and immediately showed me photos of his father’s funeral that had just taken place back in the Philippines. Some share photos of newborns they haven’t even met yet, while others share about sickness in their family back home.

Local seafarers’ centres provide a host of services for seafarers, including visits to the ships and a listening ear, devotional and evangelistic materials, centres for them to visit where they can access free WiFi and purchase various items, prayers and worship services both on board and at our centres, and much more.

During Covid we’ve also been helping them access vaccinations and assisting them with many other purchases as they’ve been unable to leave their ships. 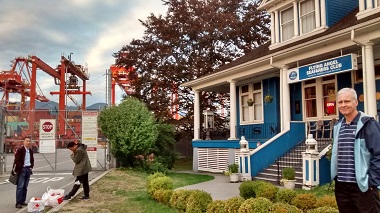 The Flying Angels Club on the waterfront a couple of blocks east of Main Street is a hub for visiting seafarers.

Most seafarers spend six to nine months at sea per contract. They may then spend two to three months back home with their families, before the cycle repeats itself.

During the Covid pandemic, even these cycles were thrown into turmoil. Initially, travel was hugely challenging, and many seafarers ended up spending time at sea way beyond their signed contracts. Others were stuck at home and unemployed for the same reason.

I met one chief cook in late 2020 who had been on board for 17 months straight without a single day off. At just 28 years old, he was totally exhausted. We could see it, and we insisted with the company that they allow him to sign off, which they finally did. The situation is now returning to some degree of normalcy, but the majority of companies are still not allowing their crews shore leave.

During Covid, a number of port-based entities soon realized that the situation was getting desperate for seafarers. Even on a normal contract, being confined to the ship for all that time makes their lives feel more like living in prison – a metaphor seafarers themselves often employ.

There is now a National Seafarers Welfare Board as well, and together we advocate for seafarers’ rights and well-being. It’s one of the best examples I know of where a broad variety of organizations – private, governmental, for-profit and faith-based – are working together to better the lives of a marginalized population.

International Day of the Seafarer

The International Maritime Organization, a UN specialized agency, has declared June 25 every year as “Day of the Seafarer . . . recognizing the invaluable contribution seafarers make to international trade and the world economy, often at great personal cost to themselves and their families” (quoted from the IMO website).

This past week we once again celebrated this special day here in the port. You may have missed it, but I would encourage people to become more aware of the plight of seafarers around the world.

To learn more about what life is like for seafarers, check out the very accessible and interesting book by Rose George: Ninety Percent of Everything.

Also, do read up more on what’s happening locally by visiting the websites of the various organizations serving seafarers here in the port:

Finally, keep seafarers in your prayers, and consider volunteering through one of the agencies listed above. Though seafarers are typically forgotten and hidden from view, their lives, and the whole maritime industry that they are part of, are a fascinating world that is very close to us here in Vancouver, yet can feel so remote.

Gary Roosma serves as chaplain in the Port of Vancouver with the Ministry to Seafarers of the Christian Reformed Church.

← Around Town: Open houses, seminary lectures and festivals . . .
Visit to Pope Francis was profound, but ‘God is not done with this story yet’ →