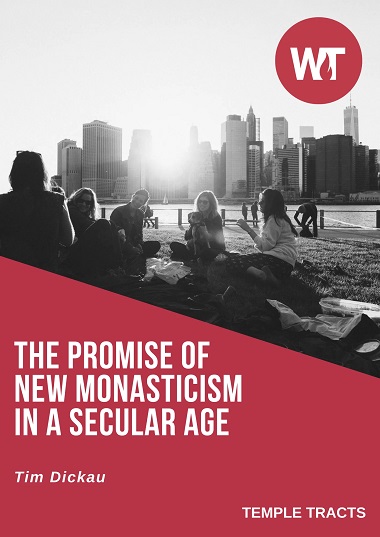 The following article is from Chapter Six of ‘The Promise of New Monasticism in a Secular Age,’ one of the ‘Temple Tracts’ appearing on the William Temple Foundation website in the United Kingdom. The entire essay can be downloaded here.

The term ‘new monasticism’ was initially coined in 1998 by Jonathan Wilson, my friend and doctoral supervisor, in Living Faithfully in a Fragmented World (2007).

In that book, Wilson draws on the insights of Alasdair MacIntyre to explore some of the weakening markers of Western culture. These markers include a fragmentation of our worldview, a lack of both historical identity as well as a future telos or goal, a retreat to the therapeutic in our personal lives, and an over-reliance on management in our leadership roles.

In response to these distortions, Wilson calls for a new monasticism that will resist the misshaping forces of our secular culture by taking up practices that have usually been associated with monasticism. Noting the decline of local communities that can help sustain such a disciplined moral life, Wilson also quotes MacIntyre, who ended his book After Virtue by voicing a longing for “another . . . St. Benedict,” someone in the present age who could lead another renewal of morality and civility through community” (2007, p.68, citing McIntyre, 1998, p.213).

In 2004, Jonathan Wilson-Hartgrove pulled together people pursuing this type of vision and together they identified “12 marks of new monasticism” (2008). These included practices such as relocating to the abandoned places of Empire (the margins of society, sharing economic resources, extending hospitality to strangers, lamenting racial divisions, intentionally being formed within community, creation care and reconciliation.

While I was completing my doctoral thesis in 2008, I discovered that all 12 of these marks had been pursued and practiced in some way or another within our community at Grandview over the previous two decades. Though we did not set out to become a ‘new monastic’ church, we (along with many other church practitioners in the West) analyzed the powers and malformations in our culture and sought to respond to those forces in ways that were shaped by a vision of God’s shalom.

To put this another way, we were searching for ways that we could faithfully be the church amidst the particularities of our secular age.

As monasticism has sustained the church through transitional and chaotic times by forming and fostering a stable culture of contrast, I believe that these new forms of monasticism woven into the daily rhythms of people’s lives can have a similar impact upon churches and society.

For the Grandview community, the following three features of monastic practices were particularly compelling.

First, monasticism recognizes that we cannot merely think our way towards right action, and so we need to take up practices that will reshape our desires, form Christlike habits in our daily lives and cultivate virtues within us.

Second, we need others to commit to participate with us if we are going to sustain these practices and habits. When we do not feel like praying, forgiving, seeking justice, or caring for the creation, it is immensely encouraging to have others support us, hold us to account and walk this road alongside us.

Third, smaller, local communities tend to be more nimble and adaptable because they are more connected to their neighbors, and so they can be more responsive to their immediate needs and less inclined to have inhibiting bureaucratic procedures. The adaptability of smaller and more local communities became especially apparent during the ongoing season of Covid restrictions.

While the12 markers of new monasticism overlap with the traditional monastic vows of celibacy, poverty and obedience among communities such as the Benedictines, Cistercians and Franciscans, leadership in new monastic communities tends to be communal rather than hierarchical.

A flatter leadership structure obviously has both strengths and weaknesses. Many new monastic communities are struggling to figure out how authority functions within their communities, and many also lack accountability to a larger governing body (a feature that was in place for older monastic communities).

In Grandview’s case, having these communities at the center of a church’s overall vision invited both an accountability and external authority, especially valuable when a house was in conflict.

In the Grandview story, the practice of stability has been essential to long-range community development and the pursuit of systemic change. Our personal decision as a family to stay longer-term led others to make similar commitments and to stem the tide of departure from the neighborhood. I find that churches – and even denominations – tend to operate with the short-term projects and accelerated pace and planning, a feature so endemic to our world as described by Rosa (2021).

In this regard, I have observed the advantage of older monastic communities is how their longevity empowers them to envision long-term projects and plans. For example, at the Ignatius Jesuit Center outside of Guelph, Ontario, where I had a retreat a few years back, I learned how they were taking on a five-hundred-year plan to cultivate an old growth forest in order to revitalize the land and forests on the five hundred acres surrounding their retreat center.

It is difficult to imagine most new monastic communities – who often struggle to plan beyond a year or two – taking on projects with such a vast scope. Yet, churches wanting to embrace a new monastic vision would do well to have a longer purview.

The emergence of these new monastic communities throughout the Western world (and among the poor in the majority world) has provided an avenue for living out a life of commitment to Christ and a source of hope for many, especially for those disgruntled with attractional churches that generally do not cultivate a thicker communal life.

This hope was in evidence among the new monastic groups we gathered in 2015 from Australia, Canada and the US. We were especially encouraged by how these communities were woven into rhythms of daily living among both singles and families.

However, we also recognized that if the numerous new monastic communities popping up around us were going to have a lasting impact, they would need to move beyond the “isn’t this a cool life we are forming together” phase towards more of an institutional life rooted in the church seeking to address the issues of injustice and poverty within their own neighborhoods – much like older forms of monasticism!

New Monasticism and the Flourishing of Democracy

Taking up these practices in a way that engages systemic issues society is critical not only for the Church but for the formation and flourishing of our democratic society. This pursuit is not only about recovering the vocation of churches, but also about recovering our human vocation so that our entire world can flourish. In Christ and the Common Life, Luke Bretherton identifies a key gift that churches pursing common monastic practices offer to society (2019, p.333).

That gift is that these churches can model covenantal rather than contractual relationship, Bretherton identifies these covenantal forms – between people and people, corporations and people, people and the state—as integral to sustaining democracy.

The effort to sustain covenantal church communities not only responds with gratitude to God, but also bears witness to political structures that God values and nourishes in the divine vison to reconcile all things. (2019, p..311).

If churches and/or Christian communities are going to be once again be salt and light in their neighborhoods – rather than being co-opted by the misshaping powers of our age – we will need to take formation more seriously. This formation will not come about merely through better thinking, or by maintaining worshipping communities, but through a robust combination of practices that lead us towards God, our church community, our neighbors and the physical places we inhabit.

The practices will stretch us to form re-shaped communities that are learning anew how to love God, our neighbor and our places in a secular age.

New monasticism seeks to foster the type of practices that can lead us to collaborate with the work of the Spirit in this transformation. The gift of new monastic practices is that they put us in a learning and engaging posture, one that can foster renewed humility and hope.

Indeed, as Covid has exposed and accelerated the inadequacy and demise of models of church prominent during Christendom, these practices point us both backwards and forwards: backwards to the sustaining and renewing role monasticism has held through the history of the church; and forwards towards learning how to form a thicker shared life and deeper engagement in place.

In that way, new monasticism offers not a “solution” to the decline of churches today but a pathway to rediscovering the reality of an active God who is everywhere at work to “make all things new”. 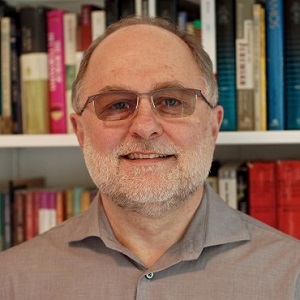 Previously, Tim was pastor at Grandview Church for 30 years. During his pastoral tenure, the church refocused its mission in this neighbourhood and developed numerous initiatives for community housing, refugee housing, a children’s performing arts group, a social enterprise developer, and an urban retreat space, as well as a second congregation.

Tim is the author of two books, Plunging into the Kingdom Way: Practicing the Shared Strokes of Community, Hospitality, Justice and Confession (Cascade Books 2011), and Forming Christian Communities in a Secular Age: Recovering Humility and Hope (Tyndale Academic Press 2021).

Temple Tracts are accessible e-books of 8,000 words analyzing key debates in religion and public life. Written by both established and up-and-coming authors, they engage theology with contemporary social ethics, politics, ecology, digital technology and philosophy. Go here to see the selection and to download ‘The Promise of New Monasticism in a Secular Age’ in full.