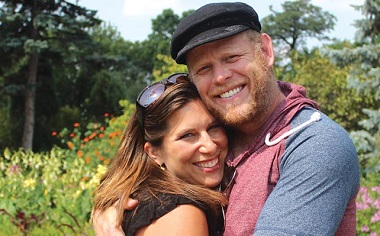 Dennis and Mistin Wilkinson have created a welcoming community in the West End.

When Dennis Wilkinson found himself on a Vancouver West End bench sharing the whole gospel story with a Jew and a Muslim friend together he knew his philosophy of church planting was rooting. He saw hospitality was at the heart of the gospel. It meant ‘making strangers into friends.’

Meta Communities is not your average church plant. It didn’t start as one and it still doesn’t operate as one. The founders wanted “to be people of God on mission for God every day.” They didn’t have a plan or a team – just a burden and a dream. They wanted to focus on a neighbourhood filled with people not yet committed to Jesus.

In 2011, Dennis and Mistin Wilkinson moved from Minnesota into their current home through somewhat impossible circumstances. The couple had visited Vancouver in 2010 and toured East Hastings. Mistin burst into tears when all she saw was concrete, debauchery and drugs. Dennis knew that God would have to speak to both of them or there was no moving forward.

Mistin was asked to speak at a summer camp in Minnesota on the issue of fear. As she researched, she had to face her own fear and commit herself into God’s care wherever that might be. The Wilkinsons returned to Vancouver and toured the West End with Norm Funk of Westside. He informed them that this area was a church planter’s graveyard but they prayed through the neighbourhood anyway.

Others in their network suggested the Wilkinsons work in the suburbs but as they looked at opportunities outside Vancouver, the calling of the West End stayed strong. One problem – no money.

Dennis noted that there were only 70 three-bedroom apartments available and all were too expensive. He scanned Craigslist for places with the right square footage and called an owner. The nine-bedroom, seven-bathroom heritage home went for $10,000 a month minimum ($20,000 in 2010). Dennis met with the owner and negotiated a deal which allowed for the foundation of the Meta Communities.

The Wilkinsons have four children – aged four years to four months. The children have really known only this lifestyle in the West End. The neighbourhood is a walking community where people roam the streets, there is little crime, the traffic is calm, and it is filled with people who want nothing to do with Jesus. All who are encountered are welcomed into being family.

Dennis has started the Meta School to give lessons to young Christians wanting to live influentially in their communities. He takes up to nine people per year where a week is spent sharing 25 hours of teaching and then the rest of the time is shadowing him in community. While many preach on missional churches, Dennis wants to model it and have people experience it in everyday life. He wants others to see how to turn “strangers into friends.” He wants them to know that they don’t go to church – they are the church.

Wilkinson says church planters “need to be intentional – they need to be present and available. They need to figure out the rhythms of life in the community – to celebrate and grieve with intentionality – to listen well to all the life stories which are weaving together with the great gospel story.”

He cites a book called the Everyday Church by Tim Chester which quotes a stat from England where 70 percent of the people will never enter a church building for any reason. “‘If we build it they will come’ doesn’t work for 70 percent of the population,” he says. “Discipleship happens best in the context of relationship.”

“I met Chris at a playground, facing divorce, fighting drugs, unfaithful. I was leery but my mom invited him and his wife for supper.” After three years of friendship building Chris came to Christ and is a central figure now in the Meta Community.

Dennis and Mistin go camping with their neighbours, step in with childcare when one suffers with cancer, host hikes, open their homes for meals and host barbeques in the park. They do life with whomever will share it. It has taken five years with some of their friends before an opportunity came for deep sharing of the gospel.

Amir was waiting in line at a pre-school five years ago. Through the connection of the school and their children Dennis and Amir developed a relationship. This past summer Amir and his wife accepted an invitation to a summer camp presentation. They stayed for an optional gathering on spiritual teaching about Jesus where music and communion were celebrated. Amir was the Muslim who sat with Dennis on the bench listening to the whole story of the gospel. He wanted to know more about grace and forgiveness and how Jesus could possibly die for the sins of another.

Story after story is being recorded in Dennis’ upcoming book which records the story of Meta Community and the community gurgling up around it. Dennis himself has been impacted significantly by Eric Metaxis’ book Amazing Grace on the life of William Wilberforce. He has had opportunity with several of his atheist friends to speak about what motivated this great man into changing the world.

“Stories are the Rubik for what God is doing,” says Dennis. “The stories are the measurements of success, not bricks and bucks.” He is supported by outside sponsors and these stories are key to helping others see how God continues to work in Vancouver’s West End through Meta Community.

Dennis would appreciate prayers as there is always significant pushback.

“Right now, the whole area of sexual ethics is a nightmare. To object in any way means you’ll have to pay, but if you love people well they will eventually love you and trust you and see that you’re not a threat like everyone says. Every church planter has to go through this dark valley. We never expected people to say such nasty things to us or about us when all we wanted to do was to support people.”

It’s been six years and the Wilkinsons feel they are finally reaching a level of trust where they can have influence on their community. “Every church planter needs a long view to be effective. Loneliness and disconnectedness are the number one issues for city people – people are killing themselves in their fancy homes – and this hidden problem needs addressing.” Meta Communities hopes they are part of God’s solution for a desperate time.