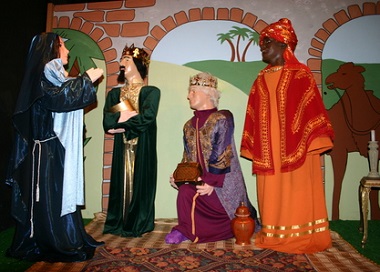 This will be my last weekly update of the year – so Merry Christmas!

Check below for all the seasonal concerts and events still to come. Among the other highlights:

My next weekly update will be in early January. 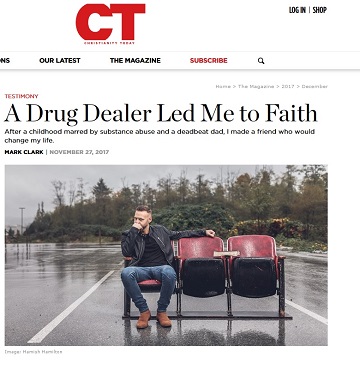 Mark Clark is the founding pastor of Village Church, which now has nine services meeting at three locations in Surrey and Langley. The church began in 2008 and now has several thousand attending each Sunday.

Following is the beginning of his testimony from Christianity Today.

I was raised in a staunchly atheist household. We never went to church. We never had a Bible. We never talked about God. My father was such an ardent atheist that he demanded my mother spell my brother’s name, Mathew, with only one t to avoid any biblical resemblance. My father then named me Mark. Clearly he didn’t see the irony. 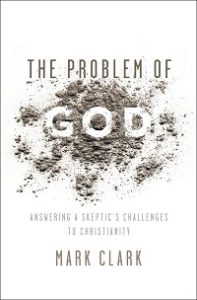 I heard about Christianity for the first time at a summer camp when I was nine years old. I was fascinated by the concept of God. Not enough to get me to attend church or read a Bible or whatever else “religious” people did but enough that I found myself going back to the camp every year, talking about God again, and then coming home to a very different life. You could sum up that life as follows: Stealing from cars, stores, the purses of my friends’ mothers – from anywhere we could, really – to get money for drugs, partying and everything else you do when you don’t have God in your life. . . .

Go here for the rest of his testimony.

Clark is the author of The Problem of God: Answering a Skeptic’s Challenges to Christianity (Zondervan, 2017).Go here for a description of the book and a video featuring him and his book. 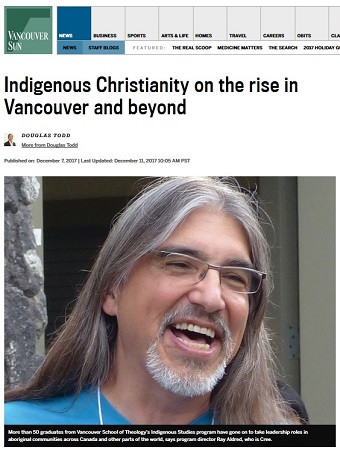 In the wake of the Truth and Reconciliation Commission report, Canadians increasingly view Christianity as the enemy of Indigenous people.

The “truth,” as conveyed mostly through the mass media, has shone a harsh light on the federally funded, church-run residential schools for Indigenous youth, almost all of which closed by the 1970s.

The “reconciliation” part of the TRC process has received far less attention. But inter-spiritual reconciliation has been going on through a variety of Canadian church denominations for decades, including for 32 years at the Vancouver School of Theology on the University of B.C. campus. . . .

More than 50 graduates from VST’s Indigenous Studies program have gone to take leadership roles in aboriginal communities across Canada and beyond, says program director Ray Aldred, who is Cree.

Go here for the full story, including a statement from Aldred about the significance of a recent $400,000 grant from the Luce Foundation.

There have been some excellent books published this year, all worthy Christmas gifts. Here are some – most of which I have mentioned earlier – with brief portions of those posts: 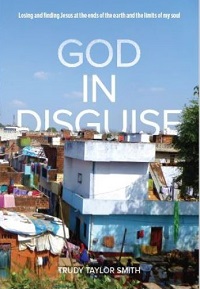 Born and raised in Texas, Trudy Smith now lives in Vancouver after having spent time in various communities in the United States, Argentina, Thailand, China, India and Canada.

Trudy and her husband Andy lived and worked for two and a half years in an Indian slums with Servants to Asia’s Urban Poor, an international network of Christian communities in the slums of Asia and the West. (There is a Servants community in Vancouver.)

The heart of God in Disguise describes their experiences in a marginalized Muslim community. The book tells the story of how she has moved from the certainty of her Southern Baptist roots through experiences which threatened to destroy her faith to her life in Vancouver:

Though I have been stripped and pruned of my certainty and plans, I am growing back like a spring vine. Though I bear the mark of the suffering I have witnessed, I also bear signs of new life.

<pstyle=”padding-left: 30px;”>Beautifully written, the reader is drawn into the inner lives and outer world of Trudy and her husband Andy as they seek to serve Christ in an Indian slum. This is a story of faithfulness in the face of seeming failure. No young idealistic Westerner who is planning overseas service can do without this book.

Trudy now works with asylum seekers who are navigating the refugee claims process in Canada.

Martina Scholtens, MD: Your Heart is the Size of Your Fist 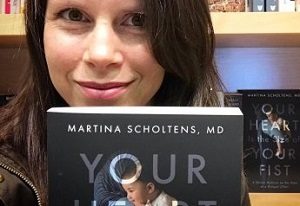 Martina Scholtens, now a clinical instructor with the Faculty of Medicine at UBC, has done a remarkable job of describing her 10 years as a doctor at Bridge Refugee Clinic:

Probably the greatest strength of the book is that Scholtens gives personal insights into the lives of her patients, who come from all over the world. For example, the story of an Iraqi family – Yusef and Junnah Haddad and their children – is woven throughout the book, from their first visit to their discharge some 18 months later. (Their identities are changed, and their situations involve composites of several people, so as to protect confidentiality.)

Her day-to-day experience at the clinic was far from what she had trained for at medical school – disease, diagnosis, treatment, referrals. She discovered that her work was often more psycho-social than strictly medical, and found herself, at various times, in the role of a counsellor, an advocate, a spiritual advisor, a nutritionist and a friend.

“Some days every patient cried,” she writes. “The box of tissues on my counter got as much play as my stethoscope.”

Go here for the rest of the review.

Iain Provan: The Reformation and the Right Reading of Scripture 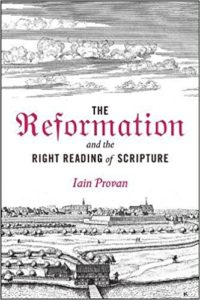 Regent College professor Iain Provan feels the Bible is not being taken seriously enough in most churches. He said in a Regent video:

One has to wonder now, 500 years since that fateful day in 1517, if Martin Luther would not feel we have lost the greatest resource, both for the Reformation and for the life of the church.

Though we often seem to envisage Luther with hammer and nails, it was in fact the Bible that he saw as the greatest tool, the most indispensable resource in both living the Christian life and then restoring the church. But how are we to read the Bible in a way that leads to this kind of restoration. It’s that question that led me to the writing of my book . . .

Go here for a brand new article emerging from his work on the book and here for a 47-minute podcast in which Provan discusses reading scripture. 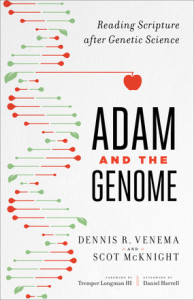 Go here to read the Introduction to the book. 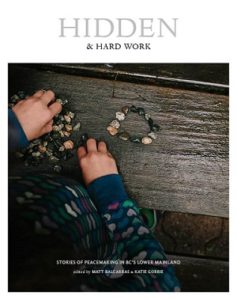 Editors Matt Balcarras and Katie Gorrie have chosen their subjects well. Balcarras is “a scientist and writer who lives in the traditional territory of the Musqueam and Tsawwassen with his wife and three children.” Gorrie is a poet, mother and editor in Montreal.

Equally important to the project are Lee Kosa, who did a tremendous job designing the book (and happens to be Balcarras’s pastor at Cedar Park Church in Delta) and Rachel Pick, who took all the pictures, which are impressive.

Go here for the full review. 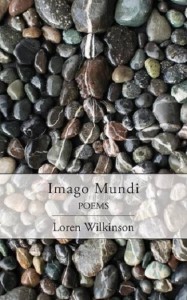 Loren Wilkinson is best known among most of us for his passionate, life-long care for the earth – the literal earth. The soil-and-flower, river-and-tree earth. But not nearly as many are aware that he wrote poems equally as skilled in revealing his care for language – the sounds and rhythms and metaphors that keep us alert to the Word made flesh. Eugene H. Peterson

Loren Wilkinson is one of those native souls to whom the tag ‘natural poet’ adheres like pollen to a bee’s knees. His personal presence and his way of living are models of enthusiasm for the creation and its Creator. He names things in order to bring them to our attention. Luci Shaw

Loren Wilkinson is a poet who celebrates his faith as well as the simple things of creation in peasant ways, ever mindful that Christ is sacramentally there as Lord of all Creation. Daily events, then, are always Epiphany. James M. Houston 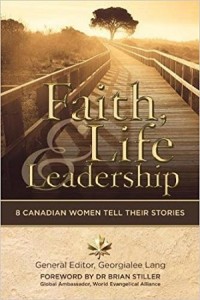 Vancouver lawyer and arbitrator Georgialee Lang has edited a book which “brings together eight female Christian leaders from across Canada who share their challenges, setbacks, failures and successes.”

Lang is featured – a trial and appellate lawyer for 28 years and a Canadian leader in the family law bar  – in Faith, Life and Leadership, along with Carolyn Arends, award-winning singer, songwriter and author from Surrey; Deb Grey, from Qualicum Beach, former Member of Parliament and Order of Canada recipient; and five others from across the nation.

Go here for an excerpt from the book. 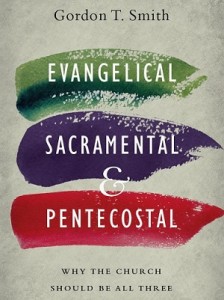 Drawing on his reading of the New Testament, the witness of Christian history, and years of experience in Christian ministry and leadership, Gordon T. Smith – who is president of Ambrose University and Seminary in Calgary and a teaching fellow at Regent College – argues that the church not only can be all three, but in fact must be all three in order to truly be the church.

Go here to read an excerpt from the Introduction to Evangelical, Sacramental & Pentecostal. 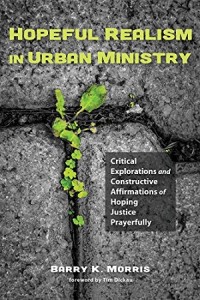 Urban ministry, especially when it is going ‘well,’ can often be exhilarating and exciting. Sticking with urban ministry through congregational, neighbourhood and cultural transition, when the church is struggling for survival, is often painstaking and tedious.

With thankful exceptions, most books on urban ministry seem to be written by those for whom things are going ‘well,’ for folks who seem to be a cut above other practitioners in their entrepreneurial and charismatic leadership. Most of those books leave the rest of us in urban ministry feeling less of ourselves and our churches.

This book is different. This book is written by a man who has persisted in a three-decade long obedience while being honest about his own struggles. . . .

Go here to read the rest of the Foreword. 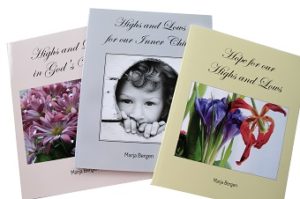 Having struggled herself with bipolar disorder for most of her life, Burnaby author Marja Bergen is committed to telling her fellow sufferers of the healing she has found in Jesus Christ.

Over the past 20 years, she has written two books and a devotional gift book, launched a small group ministry and emailed a weekly devotional to about 300 subscribers. All offer hope and encouragement to people with mental health issues.

Go here for a fuller write-up.

The Evangelical Fellowship of Canada tweeted this December 12:

Thank you for your prayers! House of Commons agreed to keep Criminal Code protection for religious officials/worship. Bill #C51 passed yesterday & has gone to Senate. Please consider writing your MP to thank them for hearing concerns of religious Canadians https://buff.ly/2nUBZzs

Go here and here for my earlier posts on the significance of Bill C-51 for the protection of religious services.