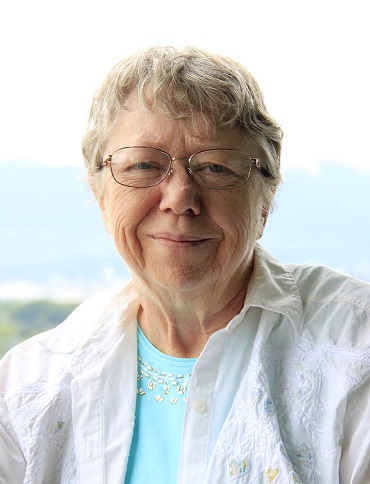 Marja Bergen has helped many people suffering from mental health issues, through her books and in small groups.

Having struggled herself with bipolar disorder for most of her life, Burnaby author Marja Bergen is committed to telling her fellow sufferers of the healing she has found in Jesus Christ.

Over the past 20 years, she has written two books and a devotional gift book, launched a small group ministry and emailed a weekly devotional to about 300 subscribers. All offer hope and encouragement to people with mental health issues.

Bergen’s latest project is a set of three more self-published devotional gift books that draw upon the emails she’s been sending out over the past four-and-a-years – Hope for Our Highs and Lows, Highs and Lows for Our Inner Child, and Highs and Lows in God’s World.

“The reason I did it is I was going through a lot of emotional pain. Something had happened a couple of years ago that left bad memories. It really was a work that came out of suffering. And it helped a lot,” she says.

The wellspring for everything Bergen writes are the hours she spends every morning communing with God.

“My journals are full of discussions I have with him,” she says. “He tells me things that I need to know and that I realize other people need to know too. So then I start writing and researching. Through this process I have learned how precious it can be to have God close by, just to be able to talk to him about anything.” 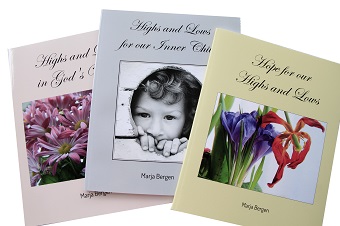 All three books are filled with Bergen’s own photographs – most often of flowers and nature scenes, but also of young children for the Inner Child book. She also did all her own editing and design work. “Every little aspect of these books is mine,” she says. “It’s kind of like gathering quite a bit of my life.”

The books are available for sale through Bergen’s website. Yet she insists that she’s not really interested in making money from them. “It doesn’t matter to me if I sell a whole bunch,” she says. “I’ve given so many away already to just friends, to people who needed them. Because if it’s just for me, then why do it?”

Bergen has enough material for two more books, but she’s putting those aside for now so she can focus on developing a new small group network for mental health sufferers.

“I realized when I started feeling better that what I wanted to do was to have a group that would learn to walk with God on a daily basis, learn to get close to him,” she says. “You get so far away from God when you go downhill. This would be a small group that would stick together. It wouldn’t be a come-and-go thing.”

In 2006, Bergen started a small group ministry to people with mental health issues called Living Room out of Brentwood Park Alliance in Burnaby, her home church at the time. (Bergen now attends New Life Community Church, also in Burnaby.) It grew quickly into a loose network of groups in Canada, the United States and even overseas. Two years ago she handed Living Room over to Sanctuary Mental Health Ministries in Vancouver.

What Bergen now envisions would be, she says, “something new. It’s a more focused way for people with mental health issues getting together around a purpose for them meeting. I’m hoping that the people who come will come to more easily turn to God every day and just really feel he’s a friend they can talk to.”

She hopes to launch the first small group this fall.

Bergen says her “big hope” is that this different approach would encourage churchgoers in good mental health to step forward to lead these small groups. “With Living Room, it’s very difficult to find a peer who is able to lead, because they have to be quite well mentally,” she says.

“I think there are probably many people who would love to be there for people with mental illness, but they need a way to do it. I think this would help them.”