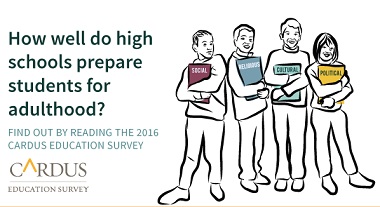 Cardus Education has led the way in measuring graduate outcomes from religious independent schools, with four major surveys since 2011.

“Private education does not, as some stereotypes might have it, create a secluded, privileged class that is largely uninterested in the common good. In fact, [a] 2016 survey found the opposite to be true for non-government schools.”

That is the key finding from the Cardus Education Survey, a major new study which measured graduate outcomes from religious independent schools.

Dr. Beth Green, director of research for the project (and program director for education at Cardus) will be in Surrey this Saturday (November 5) to speak with leaders of Christian schools from around the province. She will be the plenary speaker at the 17th Annual Leadership Conference for the Society of Christian Schools in BC.

Dr. Beth Green, director of research for the 2016 Cardus Education Survey, will be speaking at SCSBC’s annual leadership conference.

The more provincial governments clash with school boards and unions over education issues, the more parents consider alternatives to government-run schools. The common objection is that social outcomes such as tolerance and civic engagement would suffer if more students attended independent religious schools. In fact, recent research suggests the opposite is true. . . .

Repeated findings from Cardus research undermine the stereotype that a public school is the best possible forum for fostering civic and political engagement. Rather, the graduates of public and separate Catholic [not found in B.C.] schools are less likely than evangelical Protestant, Catholic independent and nonreligious independent school graduates to feel responsible for helping those in need. . . .

Our survey also undermines a persistent critique that Christian private schools are breeding grounds for political extremism and social isolation.

There is also no difference between graduates of private Christian schools and public school graduates on the value they place on tolerance. This evidence belies the popular myth that graduates of independent Christian schools exist in encapsulated social networks, sequestered in religious silos that are somehow at odds with Canadian common life.

Cardus is a think tank dedicated to the renewal of North American social architecture. It conducts independent and original research, produces several periodicals, and regularly stages events with Senior Fellows and interested constituents across Canada and the United States.

A backgrounder on the Cardus Education Survey said findings show graduates from private schools would:

• Be valuable contributors to the economy and value further education and life-long learning. Christian private school graduates are just as equipped to find work and attain credentials after high school as public school graduates. Evangelical Protestant graduates are more socially mobile and more likely to be in managerial or professional roles.

• Be informed citizens who value democratic participation and civic engagement. This is the fourth in a series of rigorous and credible research studies to demonstrate that Christian private schools are not breeding grounds for political extremism. Evangelical Protestant graduates are in fact less likely to be involved in political activities than public school graduates and demonstrate similar levels of trust and confidence in society and its institutions.

• Live personally fulfilled and healthy lives. Private Christian school graduates report a significantly more positive view of their secondary education and are more likely to believe that they were prepared for life after high school. (This study does not measure the health of graduates.)

One point of clarification. This article should not be taken to suggest that I think private education is superior to public education. Both are valuable. My wife and many friends and acquaintances in the church have worked happily and productively in the public system. Our five children all went through the public system.

However, there is a persistent call, in some quarters, for the elimination of public funds for private education:

* Pete McMartin, whose articles I usually love, wrote a misguided piece October 22: This is egalitarian Canada, so why should private schools get public money?:

. . . As a taxpayer who believes in that separation of church and state [he’s confusing us with the U.S.; Canada doesn’t have such a system], and who believes in those cohesive forces, I don’t want my tax dollars going to schools that either exclude on the basis of religion, believe the classroom is a place for religious instruction, or that cherry-pick the students they want in their schools. If you do believe that, fine. Pay for it yourself. . . .

* The Tyee posted yet another anti-private school piece, October 25, by Crawford Killian: The causes and consequences of BC’s private school growth:

. . . Private schools, in effect, educate their own communities, children and adults alike. Public schools try to do the same thing for the larger community – but part of that community has already seceded. . . . I see no end to this social divide until all education is both public and consistently good everywhere in the province. . . . In that happy event, choosing a private school would be a matter of personal taste, like buying Perrier rather than drinking pure tap water. And taxpayers’ dollars should subsidize only the public good, not matters of personal taste.

I wrote an article on the topic in September: Media debate falsely pits public versus private education.

← The pitfalls of endorsing candidates for public office
Lessons from Laodicea: Missional Leadership in a Culture of Affluence →