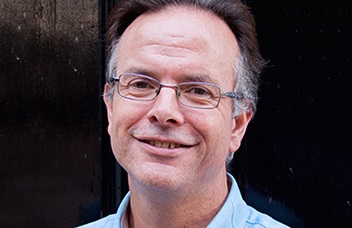 Professor David Clough has been eating a vegetarian or vegan diet since he was 18.

The  lecture, which took place yesterday (January 9) at Regent College, was jointly sponsored by A Rocha and Vancouver School of Theology.

AM: When did your interest in theology and ethics begin to merge with an interest in animals and animal welfare?

DC: I’ve been eating a vegetarian or vegan diet since I was 18, as causing unnecessary suffering and death to other animals seemed to me to be a moral choice connected to my Christian faith. When I began my academic career in theological ethics, animals seemed an obvious topic for me to explore.

Following my doctoral work, which focused on the ethics of Karl Barth, I took up questions concerning the ethics of war and Christian pacifism, and after that I turned to animals, where I thought I would get a grip on the topic as a theological issue. I soon realized that there were fundamental questions about where animals belong in Christian faith that needed to be resolved before I got to the ethical questions. What do Christians believe about animals? Where do animals belong in a Christian understanding of God’s ways with the world and God’s relationship with us?

It seems that a lot of Christians want to reject any extensive concern for animals and other creatures on the basis that God made the earth for human beings and gave everything else into our hands for our use.

It also seems that we don’t have biblical grounds for saying God created everything else for human beings. That’s not what Genesis 1 says, and there’s plenty of evidence in the creation theology of the rest of the Bible that human beings weren’t God’s sole end. The Psalms emphasize that the whole creation exists to praise God and we play our part in that.

I think too about where animals belong in the Christian doctrines of incarnation and atonement. The more I read the more I feel heartened that lots of theologians began to think in these ways before me. Christians have strong faith-based reasons that derive from the Bible and theological traditions that animals have a central, important, place – not just in a doctrine of creation, but also in the doctrines of reconciliation and redemption. Where, if anywhere, do non-humans belong in Christian visions of the redemption that God is bringing?

AM: Are the theologians you drew from scattered across the theological traditions, East and West [Orthodox, Catholic, Protestant]?

DC: I think so. I do have arguments with some theologians that have said some reasonably negative things about animals. Augustine, when he talks about the commandment “Thou shalt not kill,” says it would be absurd to think the command relates to anything other than to humans. He seems to adopt a Graeco-Roman position that suggests, because animals don’t have reason then they don’t have society with us. As such, we can go ahead and kill them. Aquinas picks up on that and makes a similar claim.

But we need to interrogate the logic of their position. There are other commitments that both Augustine and Aquinas have that ought to make us think more creatively and broadly about that kind of position. We need to be more critical of the ordering of beings from God to mud, with humans based at some dignified point a fair way up. This is not a good theological way of thinking about creaturely life.

I’m much more taken by the creation theology at the end of the Book of Job (chapters 38 – 41) where God speaks out of the whirlwind to help Job see the immensity of the divine creative project. God shows intimate care for wild animals, celebrates the threatening strength and power of Behemoth and Leviathan, and Job realizes that he is one small creature among God’s other creatures, and cannot comprehend God’s work and ways.

This does not mean that Christians need to doubt the importance of humans to God, which is affirmed in other passages, but it does mean that we need to realize that God rejoices in the uniqueness of every creature. Once we realize that, we can see that we should share in this celebration of all creatures.

AM: I want to push you about the ethical implications of your theological work, as much of your critical concern relates to the industrialization and marketization of farmed animal processing.

Technological and economic rationalities seem to discipline the ways we learn to see animals as mere resources to be raised, slaughtered, butchered, sold and consumed. Can you speak to your theological study on animals and the ontological realities of seeing animals and how they relate to humans?

More simply, what challenges does theology bring to bear on the way we might learn to see other animals?

DC: I tend to think backwards on this, which highlights some of the doctrinal questions. I ask, if an alien species looked at what we were doing to non-human species, what would they see? For example, look at the way we treat broiler hens, having re-engineered their lives so they reach slaughter weight by about six-weeks – so they grow up as crops in these windowless sheds with bodies that have become much too heavy with immature legs so the at ends of their lives they experience great suffering. All of that is because that is an easy, cheap way of being able to raise and kill them for our convenience.

What if an alien looked at that practice and asked, what does that mean about what these humans believe in so far as theology? It looks as though we worship a deity that is wholly anthropocentric, wholly focused on what would constitute human convenience with zero regard for the well-being of any other creature. That would be a very convenient god to worship, if you wanted to pursue your own interests without any thought at all for other life on the planet. But once you name it that way, that isn’t any kind of Christian God.

Here are chickens that, if we read the Psalms, have this vocation to be praising God in their own chicken way, which used to include things like flying for goodness’ sake, let alone being able to raise their young and flourish in the natural world. But we’ve taken their bodies, and remade them, subjected them to horrific monotonous environments that inflict significant suffering. We take away almost any of the goods of life that God intended for them.

I think Christians should be at the forefront of those who recognize the scandal of current practice. We kind of sleepwalked into this situation. This is a novelty since the Second World War as the industry has reinvented animal agriculture without talking to consumers about it. Christians don’t necessarily need to feel terrible over the practices we have found ourselves immersed in, but recognize the responsibility to become conscious of what we are doing to these other animals and ask whether these practices are compatible with our faith.

AM. You are the founder and co-director with Sarah Withrow King of CreatureKind, which “invites Christians to love God and their neighbours – all of them – by attending to the welfare of farmed animals.” Could you tell us a bit more about this organization?

DC. I used to think my job as an academic was to do the research in theological ethics and trust others to recognize its value – and they would take my scholarship out to the church and the world at large. But I should be taking responsibility to reach an audience outside the academy.

If there was one thing that I would like to do with my academic career it would be to persuade the church that they should be at least as attentive to the sourcing of animal products as they are with fair trade tea and coffee, that it would be odd to go to a Christian gathering where no one would be paying attention to the sourcing of these sorts of products.

So I wonder, what would it take to begin to build something that might have the potential to reach a wider church and to persuade Christians that they have faith-based reasons to care about animals?

We are now in discussion with a significant number of theological colleges and seminaries in the UK and in North America about their participation with CreatureKind. If we can ask theological colleges and seminaries what it would mean to take animals more seriously, with implications beyond their catering policies and practices, with implications for the training of ministerial candidates – this will be the most effective way of introducing new Christian thinking into the churches in the medium and long-term.

AM: While visiting Regent College, I have arranged a vegan dinner with not only some Regent Faculty but faculty from UBC’s Faculty of Land and Food Systems.What will you hope to discuss with these people?

DC: I’m really looking forward to that meal! Sometimes people have the sense that veganism is an ascetic option, but I love to cook and eat good food, like most of the vegans I know.

What I’d like to talk about is fundamental values in the foods we eat that shape institutions and communities, and how to put those into practice in one of the most significant acts that people do together — eating. Wouldn’t it be wonderful if universities and colleges, especially those with Christian foundations, began to think about what that would mean for how we are eating together, where we are getting our ingredients we are serving people, and how could do that in stronger alignment with our commitments?

Reducing the consumption of animal products is an important outcome for me. At the moment, raising animals takes 78 percent of all agricultural land. We feed one-third of all global cereal crops to animals. So, even if you are only concerned about human food and water security, we definitely shouldn’t be wasting the resources that we currently do.

It is massively inefficient to feed wheat to cattle to get the protein from the bodies of the cattle rather than to feed wheat to human beings. Yet that practice contributes more global greenhouse gases than transportation, as well as having serious problems for human health. I would love to start the conversation about ways in which these institutions could think about strategies that would reduce their overall consumption of animal products.

For those who want to continue to eat animal products, I want people to think about the environments where those animals come from, and are being raised. There’s a world of difference between the broiler hen facilities I spoke of earlier and of animals that get to live in the outdoors and experience a good life. Supporting local farmers that do much better by their animals than the industrialized agricultural systems would be another component of the conversation I’d like start. 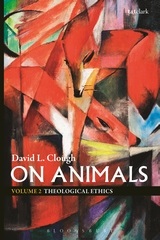 This interview (which is re-posted by permission from the Regent College site), and Dr. Clough’s lecture, were made possible in part through the support of a grant from the John Templeton Foundation. The opinions expressed in this publication and the lecture are those of the interviewer and lecturer and do not necessarily reflect the views of the John Templeton Foundation.

David Clough studied at Cambridge and Oxford universities before completing a PhD at Yale. He is nearing the completion of his second of a two-volume monograph, On Animals. You may also wish to read his larger article, “Consuming Animal Creatures: The Christian Ethics of Eating Animals.”

He lives in northwest England, next door to the Chester Zoo, with his family of five humans, one cat, and three gerbils.