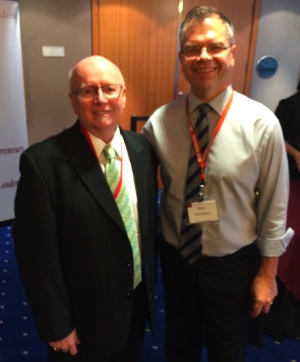 Since 2005, he has organized conferences which draw together entrepreneurs and business leaders. Having spent a couple of days at the recent ELO conference and dinner, I would say he is beginning to realize some impressive returns on his investment. Following are a few observations about the enterprise.

This was a very successful event, with more than 500 people making their way to the Sheraton Wall Centre Hotel to take part. Some 150 entrepreneurs and business leaders participated in the daytime sessions, which featured some high-powered financial gurus such as McGill professor / Globe and Mail columnist Karl Moore and business leaders like Paolo Aquilini of Aquilini Investment Group and Dale Lutz and Don Murray of Safe Software.

Participants came from across Canada and the United States, with several from Hong Kong and Africa. About 420 people filled the ballroom set aside for the keynote address by Mark Burnett, who received this year’s ELO Entrepreneurial Leader Award along with his wife Roma Downey. 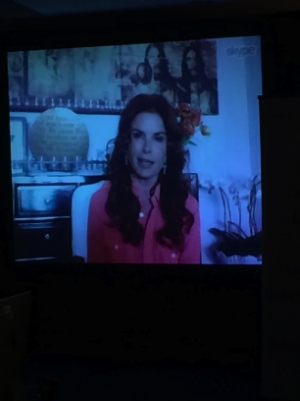 Roma Downey being interviewed on skype

Entrepreneurs are creative, they take risks, they make things happen. Not surprisingly, then, they are often very interesting people.

That was certainly the case with Mark Burnett, creator of Survivor, The Voice and several other highly successful reality TV shows and his wife Roma Downey (star of Touched By an Angel). Together they produced The Bible mini-series, which aired earlier this year and has already been viewed by almost 200 million people worldwide.

A skype interview  during the conference with Roma Downey from their home office in Malibu, California revealed her passion. She said many in the entertainment industry thought they were crazy to make The Bible. But “Once decided, we’ve never looked back. It was a bold move, a risky move, to step out of the boat like Peter.”

In the same way, regarding Son of God, which was previewed right after the ELO conference at a Richmond theatre and will be released February 28, she said: “Jesus hasn’t been on the big screen since The Passion, and not in a full way for 50 years or so. We believe we’ve all been commissioned to spread the gospel and this is how we can use our talents.” 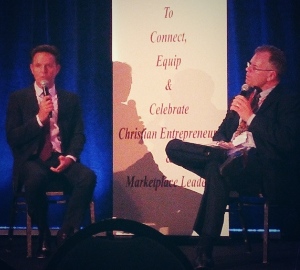 Mark Burnett is probably not as well known as his TV shows, but his stories made it clear how he has risen to the top of the TV world.

Beginning his life in working class London, he joined the Parachute Regiment in the British Army while still a teenager. At 22, he was off to America with $200 in his pocket. He found work for a couple of years as a nanny in California, then sold T-shirts along a rented portion of fence at Venice Beach. In 1991, he joined a French adventure competition, then bought the rights, and brought a similar show, Eco-Challenge to the States. These shows were precursors to Survivor.

Burnett clearly has an adventurous spirit. “You start down the road,” he said of his approach to new projects, “and nothing works out the way you think it will . . . You need to be maybe 30 percent certain, and figure out the rest along the way.”

In terms of the upcoming release of Son of God, he said, “Repeated levels of success in earlier shows gave us permission to make it,” even though most in the industry thought no one wanted to see a movie about Jesus.

He said his working partnership with Roma Downey has worked well: “I’m a pretty in-your-face guy, working class London, Special Forces; Roma is very gentle.” He could have been too aggressive, she too passive; “We did it together.”

During a live interview with Rick Goossen, Burnett probably surprised many at the conference with his passion for the gospel. He was particularly forceful about the importance of being vocal and clear about one’s faith and being united as Christians.

“I am a very noisy Christian,” he said. Christians “do a great job of being harmless, but are not so good about being wise.” He feels The Bible did well because Christians got behind it, and he was not hesitant about urging the audience to promote Son of God next year. 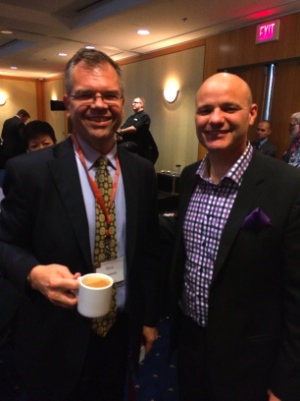 More than one speaker at the conference pointed out that entrepreneurs are not well understood in church. Often they are simply seen as sources of money, and are often asked to help manage church finances.

While they might be willing to help out in such ways, they will usually be frustrated. Paolo Aquilini said “An entrepreneur, by his very nature, is never going to take a regular job.”

Host Lorna Dueck described Paolo’s work as “developing communities to enhance social fabric,” but Paolo didn’t shy away from the spiritual dangers of the entrepreneurial life.

“It takes great discipline” to be a Christian entrepreneur, he said. “We are in a dangerous job . . . we handle money.” But he believes “God likes good competition” and says it is legitimate to be shrewd as serpents as well as innocent as doves.

Among the primary values of the conference was that it offered Paolo – and others – a safe environment, among like-minded people, in which to wrestle with the ways in which their faith and work intersect. 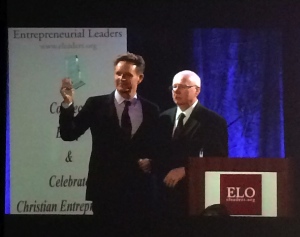 Rick has developed some important networks over the years. One of the best alliances he has made is with Geoff Tunnicliffe. They’re both local boys, but that doesn’t mean they would necessarily have crossed paths. Geoff was converted through the bus ministry of Bakerview Gospel Chapel in Richmond,  but is seldom home now because of his role as secretary-general of the World Evangelical Alliance (WEA), which represents some 600 million Christians.

Geoff does retain a home in Ladner, but he told me that he and his wife Jewel only spend five or six weeks a year in the Vancouver area now. He is in New York, at his office, about four months of the year, and the rest of the time he is travelling around the world on behalf of the WEA.

He had just arrived from Hong Kong as the conference began – reporting that The Bible had just begun airing on local TV and was ranked number one – and the day after the conference he was off to meetings in Vienna. He meets with many world leaders, including Pope Francis – something he would never have dreamed of as a conservative young Christian.

Rick’s other strategic alliance has been with Paul Stevens, who moved from pastoring into the academic life at Regent College, where he is now professor emeritus in Marketplace, Theology and Leadership. As he said during a presentation at the conference, the guiding principle during his 50-plus years of work has been to encourage lay people to actively practice their faith at work and at home, seven days a week.

A third important alliance is with leaders from Hong Kong; several businessmen flew over to join the Vancouver conference. Their prayers for Roma Downey following her skype interview were a highlight.

Hugo Chan, a Hong Kong-based lawyer, marketplace leader and lay pastor, reported on opportunities in China, noting that Hong Kong used to welcome people to China, but now is also a way for China to move out to the rest of the world.

Rick and Paul will fly to Hong Kong for another ELO conference this weekend (November 28).

Rick Goossen is promoting the entrepreneurial spirit. He has written that “ELO was started due to the conviction that Christians are called to the marketplace and that entrepreneurial and innovative people in particular can have an exponential impact if their passion and energy are harnessed for kingdom-building purposes.” That call permeated the conference.

Not everyone, admittedly, can afford to attend a two-day conference at the Sheraton Wall Centre Hotel. But Rick insists that “Entrepreneurship is for everyone. Don’t think in terms of the person, but the process. Not everyone can found and grow a wildly successful company – but everyone can become more entrepreneurial, seeking creative solutions to pressing problems.”

Through networks, the word is getting out around the world. Rick also partners with groups that work with business people in the marketplace, even though ELO itself restricts its focus to international conferences.

ELO’s advisory board of about 20 members has a strong local focus, despite its international outlook. Among the members are John Bandstra, president of Bandstra Transportation; Ian Daniel, president of NCOL Internet; Peter Mogan, partner at Mogan Daniels Slager Law Firm; and Carson Pue, executive pastor of First Baptist Church. 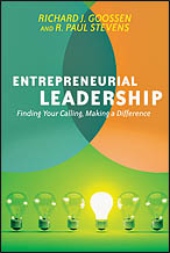 Rick Goossen read this commissioning prayer – from Entrepreneurial Leadership (IVP, 2013, co-written with Paul Stevens) to the assembly at the end of the conference.

Go into the marketplace, into the church, into not-for-profits and charitable organizations. Go in the power of the Holy Spirit. Go in the creativity that God the Creator continues to inspire in us. Go with the stick-to-it-ness which is the fruit of the Spirit. Go with integrity. Envision things which have never been produced before. Invent new services and products. Implement these as a way of loving your neighbors near and far. What you are doing is kingdom work – you are advancing the lovely and life-giving rule of the sovereign Christ so that the potential of God’s creation is unfolded, human life is enhanced and improved, so that people and nations are helped. Create organizational cultures that humanize workplaces, that steward the gifts and talents of people and that in beliefs, values and symbols express a foretaste of the new heaven and earth. And where you have opportunity and especially where your work, the way you work and the organizational culture you have crafted raises the questions of “why?” and “How come?” put in a good word for Jesus and the good news of the kingdom of God. You are doing the Lord’s work. You are in full-time ministry. Do not love money because you cannot serve God and mammon. But use money as a means of blessing people. Take wise risks knowing that your gracious God is inviting you so to do, and knowing that even if you fail God can turn that failure into growth and learning. And in all things work for the glory of God. And at the end of it all when you meet the Master of the universe, may he say, “Well done, good and faithful servant. Come and enter the joy of your master.” Forever and ever, Amen.

All photos were taken by Jonathan Christian of We Make Stuff Happen.