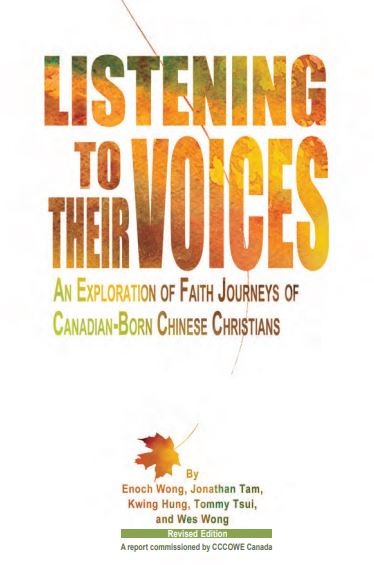 A major study of the faith journeys of Canadian-Born Chinese Christians finds that many are falling away from the faith and suggests some ways to reach and mentor them.

Following is an excerpt from the Introduction to the abridged version by Enoch Wong, followed by eight very brief introductions to “directional action recommendations.”

Listening to Their Voices (LTTV) is the research report of the study “To Whom Shall We Go?” conducted across six cities in Canada (Vancouver, Calgary, Edmonton, Montreal, Ottawa and Toronto) that represent approximately 87 percent of the Chinese population and the Chinese immigrant churches in Canada (Statistics Canada, 2014).

Extending the research of Hemorrhaging Faith (Penner, Harder, Anderson, Desorcy & Hiemstra, 2012) by the Evangelical Fellowship of Canada, Listening to Their Voices leverages Hemorrhaging Faith’s eSurvey and interview instruments with its own nuanced modifications for the purpose of probing the lived experience of the Canadian-Born Chinese Christians (CBCC) in the context of the Chinese Canadian Immigrant Churches (CCIC).

The objective of this study is to explore the faith journeys of two cohorts of CBCC . . .

. . . by examining what has shaped them to be the religious type they are, through investigating the factors that motivate them to either disengage from CCIC and/or faith altogether, or continue a steadfast devotion to the religious community and a firm adhesiveness to their faith. . . .

To respond to the unvarnished aspiration and frustration of CBCC as well as the emerging determinants for their attachment to faith and CCIC, and to buck the trend of CBCC defecting from their faith affiliation, a seismic shift of ministry paradigm and practices at CCIC is required.

To that end, eight directional action recommendations [below are just the introductions, fleshed out in the report] are identified in this chapter to ameliorate the CBCC’s concerns and to build on what may have already been done at CCIC and elsewhere to deepen their faith conviction. . . .

Finally, the recommendations are a clarion call for the first, second and the next generations of CCIC and CBCC leaders and laity to engage with one another with dignity and mutual accountability in addressing the phenomenon of the exodus.

In so doing, CCIC may recognize that they are called to chart a new course that is characterized by mutual humility and respect, one that is marked by intergenerational collaboration and reflects not merely the priority of the local immigrant church, but also the broader interest of the Kingdom of God which transcends national and ethnic boundaries.

2. From belonging to being discipled
Developing and implementing a set of radical yet Biblical-based discipling principles and practices that accept risk-taking and shape a life-long devotion.

3. From textbook instruction to journeying
Creating a set of mentoring practices that are not necessarily formal but organic, championing a space for reverse mentoring and mutual support.

4. From protecting to preparing
Putting in place a concrete transition plan for high-schoolers to move into university, and for college students from university to career.

5. From “a museum of the saints” to “a hospital for the wounded”
Fostering an environment that is safe and respectful, allowing doubt, questions and failures to be expressed without condemnation.

6. From rigidity to fluidity
Reimaging and redeploying rituals and symbols in a way that is both Biblically centric and culturally adaptive (e.g., worship, ambiance, ministry orientation and practices).

7. From hierarchy to lower power distance
Rethinking and resetting leadership practices such that: (a) power distance is narrowed; (b) a structure and culture is espoused that is local-born friendly, with open communication, distributed decision-making responsibility and trust; (c) leadership apprentice is encouraged.

8. From being “stuck in the middle” to “reigniting the vision”
Reigniting the CCIC’s vision to (1) incorporate the input of the local born and; (2) to increase the share of ownership of the local-born through practices of inter-generational ministry for the sake of God’s kingdom and a holistic world mission.

These excerpts give just a hint of the abridged version, which in turn recommends that one should read the full version.

The abridged version of Listening to Their Voices by Enoch Wong is 86 pages (52 in English), while the full version by Enoch Wong, Jonathan Tam, Kwing Hung, Tommy Tsui and Wes Wong (all in English) is 346 pages. Both eBooks are published online by CCCOWE Canada.

Faith Today had an article about Listening to Their Voices last year.

In an upcoming update I will look at the just-released General Survey of Chinese Churches in Canada (2019), also published by CCCOWE.

Given that there are more than 100 Chinese churches in the Metro Vancouver area, both these reports would be well worth the time of local denominational and church leaders.