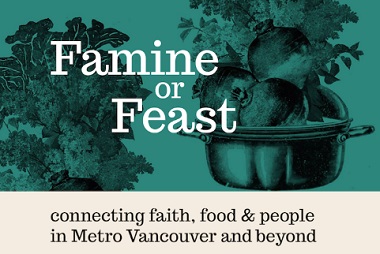 This is the second of a two-part series by Matt Humphrey, who is assistant director of the Brooksdale Environmental Centre at A Rocha Canada, based in south Surrey.

Matt is involved with an event coming up at Grandview Calvary Baptist Church October 29: Famine or Feast: Connecting Faith, Food & People in Vancouver & Beyond.

In part one of this essay, I argued that food and food systems are an oft-overlooked feature of our faith. Food reminds us that we are creatures, we are human, and we worship a God who reveals himself as the Bread of Life.

In this second part I ponder how our food system reflects these questions about the meaning of human life. How, in a world of famine and hunger, do we bear witness to God’s feast?

If our food system is a manifestation of what we think it means to be human, we should honestly admit that is not good news. In the food system today, paradoxes abound.

First, the world today supports 7.5 billion human inhabitants, but while one billion are hungry, the same number – one billion – are overweight or obese.

Second, for all of the advances that civilization has brought, the world still gets the bulk of its calories from just three annual crops: wheat, rice and corn. These three crops played a prominent role in the Agricultural Revolution nearly 10,000 years ago, but the fact that we still rely on these big three for more than 60 percent of the world’s food supply spells risk for us, particularly in light of climate change with its predicted pests and crop failures.

Third, much of the food consumed in North America today has been carefully engineered to maximize the levels of salt, sugar and fat – three substances which have always been rare in nature, and are thus of particular interest to human bellies and brains. Such food actually strokes the pleasure centres in the human brain and forms an addictive bond.

While it is undoubtedly your choice to consume the Slurpee or bag of salted potato chips, those products have been designed to keep you coming back. (Bet you can’t eat just one?)

Consumers today find themselves swimming in a vast sea of information about food – where it comes from, how it is produced, effects it could have on human bodies . . . the list goes on and on. Turning our attention to the food system moves us beyond being mere consumers, however, to ask bigger and more difficult questions.

Who – in our city, country and world – has access to food, and who doesn’t? Who profits from the food system as it exists? How well are farmers making a living growing food? What role does our government play in supporting a food system that is just and equitable? What role might it play?

Looking around our city of Vancouver, it is easy to see some of the paradoxes of our food system. I encountered this firsthand in April while on a tour downtown with my students.

Of particular interest was a stop at Sole Food Street Farms, a social enterprise that employs people from the Downtown Eastside. Sitting atop a paved parking lot covering contaminated soil, Sole Food grows crops in plastic containers. The operation was impressive – even in April, before warm weather launched the growing season.

But walk six or seven blocks east of Sole Food and you will find yourself in a different environment – a food desert. While it is possible to get fair trade chocolate and urban espresso, access to fresh produce and meaningful employment is limited. There are efforts to change this, of course, with churches and ministries working to feed the hungry, heal the sick and clothe the naked.

But how does the church confront the systemic nature of the food system? What, for folks like me – white, middle class members of society – does a commitment to food justice entail? How do I use my gifts and skills towards that end? These are timely questions.

A recent report from Grain notes that small farms continue to produce the bulk of the world’s food, but do so on less than 25 percent of its agricultural land. And while in Canada the image of a farmer may conjure up an old man sitting atop a tractor with a John Deere hat and Carhartt jacket, the majority of the world’s farmers are women.

For these – our neighbours – the challenges include climate change, global trade agreements and corporations buying up land in productive places. (Google ‘global land grab’ for further enlightenment.)

So again I ask, what does a commitment to food justice entail for us living here in Western Canada? How does faith compel us to speak and act in light of this knowledge? How do I use my gifts and skills towards that end? 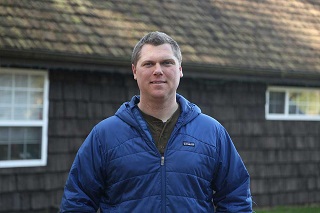 Matt Humphrey works with A Rocha Canada in south Surrey.

These are basic questions for the church today, which since Acts 2 has distributed its food to those in need. The faith community has always formed a sort of ‘food system’ – receiving from God what gifts it has and offering these back up for the life of the world.

Opportunities to do so in ways that work for justice and the flourishing of our local and global neighbours abound. The question is – how will we engage?

Issues such as these will be addressed October 29 at Famine or Feast: Connecting Faith, Food & People in Vancouver & Beyond.

← What does food have to do with faith? Are community gardens just a fad?
Esther Hizsa: Stories of an Everyday Pilgrim →
Tweets by ChurchforVan