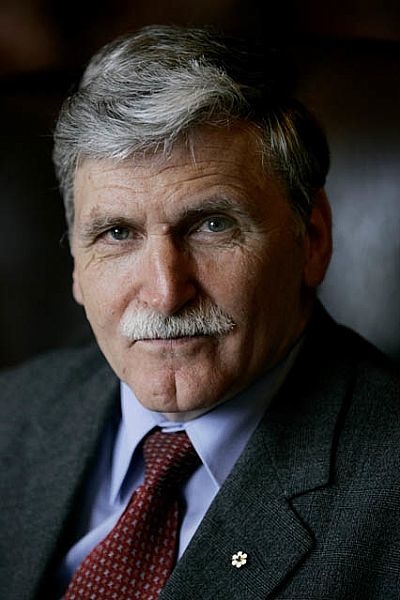 Retired Lieutenant-General Romeo Dallaire will address the annual BC Leadership Prayer Breakfast May 16,

This year’s British Columbia Leadership Prayer Breakfast, set for next Friday (May 16) at Vancouver’s Hyatt Regency Hotel, is officially sold out; nearly 1,000 will be in attendance.

But people wanting to hear and see Senator Romeo Dallaire – an outspoken advocate for human rights, genocide prevention, mental health and war-affected children – might still have a chance of having their wishes fulfilled. On its website, City in Focus, the event’s organizer, is encouraging those interested to get onto the breakfast’s waitlist.

Dallaire has been a guest speaker at several faith-based events, including the National Prayer Breakfast in Ottawa, a decade ago, not long after his book, Shake Hands With the Devil, was published, The book included this famous statement: “I know there is a God because in Rwanda I shook hands with the devil. I have seen him, I have smelled him and I have touched him. I know the devil exists and therefore I know there is a God.”

His experience in Rwanda, at the time of that nation’s genocide, which saw the violent deaths of an estimated 800,000 people, left deep spiritual and psychological marks on him. A Canadian military man, he had gone to Rwanda in 1993 as Force Commander of the United Nations Assistance Mission. In that posting, he saw the country descend into chaos and tribal genocide the following year, as the ruling Hutus went on a killing spree against Hutu moderates and Tutsis, in the central African country. 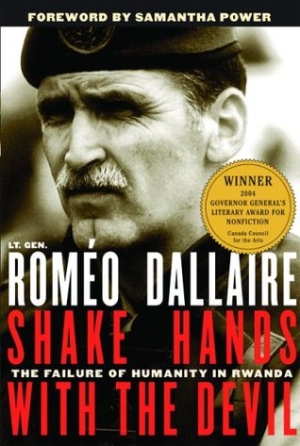 “Rwanda will never ever leave me,” he said in Shake Hands With the Devil. “It’s in the pores of my body. My soul is in those hills, my spirit is with the spirits of all those people who were slaughtered and killed that I know of, and many that I didn’t know. . . .  Fifty to sixty thousand people walking in the rain and the mud to escape being killed, and seeing a person there beside the road dying. We saw lots of them dying. And lots of those eyes still haunt me, angry eyes or innocent eyes, no laughing eyes.

“But the worst eyes that haunt me are the eyes of those people who were totally bewildered. They’re looking at me with my blue beret and they’re saying, ‘What in the hell happened? We were moving towards peace. You were there as the guarantor’ – their interpretation – ‘of the mandate. How come I’m dying here?’ Those eyes dominated and they’re absolutely right. How come I failed? How come my mission failed?”

The Post Traumatic Stress Disorder (PTSD) with which he was later diagnosed, and which led to a suicide attempt in 2000, has been traced, in part at least, to his Rwanda experience.

His spiritual outlook, as a devout Roman Catholic, has made him a sought-after speaker at faith-based events, given that he is constructively critical of church-based organizations in Rwanda for apparently having done too little to head off the genocide. Conversely, he has spoken well of faith-based aid and micro-credit ministries and groups, for having encouraged reconciliation and national rebuilding, making Rwanda a much better place to live and work than it was two decades ago.

In 2005, Dallaire, who had retired from the military with the rank of Lieutenant-General, was appointed a Canadian Senator by then-prime minister Paul Martin. The senatorial role has given him opportunity to speak out on the range of issues which have impacted on his personal, professional and military life.

Given that it is two decades this year since the Rwandan genocide, Dallaire has been in particularly heavy demand as a narrator of his experiences in that country. The BC Leadership Prayer Breakfast is just one such events in which he will be featured. While being organized by City in Focus, it occurs under the patronage of the Lieutenant-governor of British Columbia.

Similar breakfasts take place annually in most provinces of Canada, as well as in the national capital. The best known of all such events is the Presidential Prayer Breakfast in Washington, which draws together leaders from throughout the world for several days, for breakfasts, luncheons and dinners attracting the interest of various leadership groups. And there are approaching 200 such national events globally each year, patterned after the Washington conclave.