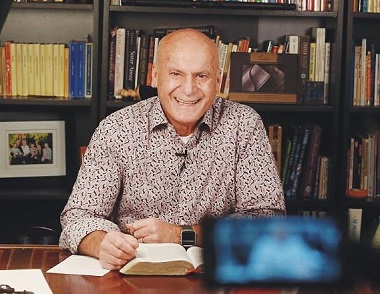 Barry Buzza is trying to be more aware of God’s timing.

“Now learn the parable from the fig tree: when its branch has already become tender and puts forth its leaves, you know that summer is near; so, you too, when you see all these things, recognize that He is near, right at the door. Truly I say to you, this generation will not pass away until all these things take place. Heaven and earth will pass away, but My words will not pass away.” (Matthew 24:32-35)

How many interpretations of this verse have we heard? Is a “generation” 20, 40, 70 or 100 years? Is it a race of people? When does summer come? Is this talking about when the rapture is going to take place? Or the second coming? What does it mean, “He’s at the door?” The book 88 Reasons Why the Rapture Will Be in 1988 is testament to the fact that we really don’t know, and do not have to understand, God’s timing. Just be patient and keep close to Jesus. He’s always on time!

There are occasions when God clearly gives us a date to go with his plans. I can remember at least two very distinct prophetic words when the Spirit said, “This will happen within 60 days!” or “Now is the time!” And it was exactly as prophesied. But then I think of a distinct prophecy given to me, which I thought was to be fulfilled immediately, but took 40 years to see the ultimate fruit.

Figuring out God’s timing for me has been one of my greatest challenges, but I’ve learned that if he wanted me to know a particular date, he would tell me what it is. Not knowing keeps me attentively waiting and closer to him. It’s like the parable that Jesus told of the bride waiting for the bridegroom:

And while they were going away to make the purchase, the bridegroom came, and those who were ready went in with him to the wedding feast; and the door was shut. Later the other virgins also came, saying, ‘Lord, lord, open up for us.’ But he answered, ‘Truly I say to you, I do not know you.’ Be on the alert then, for you do not know the day nor the hour. (Matthew 25:10c-13)

I can think of several times in my life when I have made the serious, and sometimes costly, mistake of putting a date on what I felt that God was saying to me. One was in 1972, when I was serving as youth pastor of Coquitlam Foursquare Church. The elderly pastor had resigned. I was 25, married to Susan and we had our baby, Kelly. Coquitlam was my home town. Our church of about 70 people loved us and we were in a young growing community. In my mind, I thought that I would be the perfect candidate to be the new pastor. I also felt like God confirmed it to me.

But it was not to be. Rather than even interview Susan and me, a pastor, younger than I, from the USA was chosen. Susan and I accepted It, but I was very disappointed. Who knew that 20 years later in 1992, I would be given the Coquitlam church as our second campus. It was the right time for me and the church.

Then, after we had planted our new Northside Church in 1979, and were meeting in a school gym, I knew that we were going to grow and that it was time to build a church building. An opportunity came in 1983 and it felt like God gave us a green light. We were given for free a 4,400 square foot building, but had to move it, in three large pieces, about 15 kilometres.

We rushed to buy a piece of property, but because zoning took so long, we had to move the buildings temporarily to a waiting place. The story is funny, when I think back on it, but it wasn’t at the time. It was very stressful, trying to push God to work something out ahead of his plans.

In the end, nothing came together, and we had to dismantle the buildings and haul the pieces to the dump. The fiasco cost our young church about $45,000 (in today’s currency about a half million dollars) but I did learn about being patient and waiting for God’s timing. One of our guys commented as we were dismantling the buildings piece by piece, “Next time someone gives us a building, let’s move it closer to the dump!”

I thought I’d learned my lesson! But then, a couple of years later, one of our men came up with an idea to buy five and a half acres of land, develop four acres into housing, and with the profit, use the one and a half acres to construct a church building. We had no money, but with the Foursquare national board’s permission, we could borrow it.

We worked hard to put our proposal together for the board’s approval, and were confident that we were in God’s will, but when it came to their decision, we were denied permission. I was hurt and disappointed. “Those stuffy faithless leaders were not listening to God! Didn’t they know that I knew what God had said to me!”

It was a year later, after the property which I was positive God had reserved for our church, sold to another buyer, that everything turned around. We were able to buy the same property, develop the housing lots and build our new church building, for $250,000 less than we would have if it had been originally approved. Again, in today’s dollars, that was a saving of well over $2 million – I was learning over again what I should have known years before. God knows best, his timing is always perfect and I need to be patient and trust him. I also need to trust wise counsel!

I’m sure any leader who has served God for a few years could give stories such as I have experienced. In my seventies, although I don’t want to be lax or faithless, I’m much more patient and understanding when what I know are God’s plans, don’t fit into my timing. God’s perspective is so much higher than mine. I read David’s second psalm again today:

Why are the nations in an uproar And the peoples devising a vain thing? The kings of the earth take their stand And the rulers take counsel together . . . He who sits in the heavens laughs, The Lord scoffs at them.

We have all of our plans; we think we know so much, but our perspective is so limited. I remember I was standing at the church door welcoming guests one Sunday. A father and his six year old daughter greeted me, and the man said with a wink, “My daughter just told me on the way to church, ‘Daddy I think I know everything now!’”

I bent down and looked at the child and exclaimed, “Wow, that’s amazing honey! Why do you think you know everything!”

She looked me straight in the eye and confidently responded, “Well I can’t think of anything I don’t know!”

Sometimes I think I’m a lot like that little girl!

Pastor Barry Buzza, and his wife Susan, have served in pastoral ministry for over 40 years. They planted, and he has pastored, Northside Foursquare Church for 38 years. Their church has in turn planted more than 150 churches in Canada, Asia and Africa. They are also involved in Over the Wall Ministries, which “promotes giving the fruit of our personal, business and spiritual success away to healthy, reproducing causes that are beyond our church circles.”

This article was sent out recently as part of Over the Wall’s monthly newsletter, and is re-posted by permission.