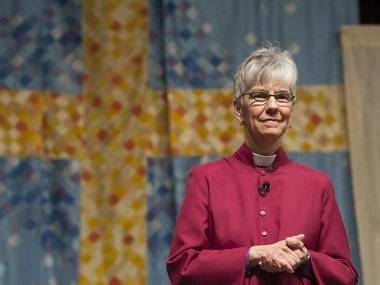 Archbishop Melissa Skelton stated July 17 that she will authorize a liturgy for the marriage of same-sex couples within the Diocese of New Westminster, effective August 1.

Archbishop Melissa Skelton was not able to attend the General Synod of the Anglican Church of Canada, which took place July 10 – 16 in Vancouver, due to health issues.

But she responded July 17 with a Pastoral Letter stating that local Anglican priests will soon be able to conduct same-sex marriages.

As of August 1, 2019, I will authorize a liturgy for the marriage of same-sex couples within the Diocese of New Westminster under the following conditions: 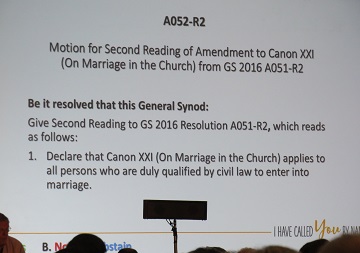 I expect the first two conditions to be temporary until we as a community become familiar with this change.

As I have stated before, I will continue to do all in my power to maintain a Diocesan culture that respects a variety of theologies, understandings and practices related to marriage.

Additionally, a person’s position on marriage will not serve as a litmus test for inclusion in this Diocese whose diversity in culture, theology and practice I deeply value.

Finally, as a Diocese, we will do our part to maintain our relationships with other dioceses and communities that do not choose to authorize liturgies for the marriage of same-sex couples. 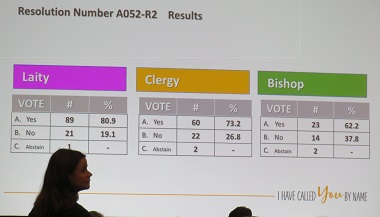 Skelton’s statement came in the wake of a key defeat last Friday night (July 12) for those in favour of same-sex marriage for the national church.

Following a divisive vote against formally allowing same-sex marriage in the Anglican Church of Canada, one priest mused whether the church should “get out of marriages” altogether, while others suggested they would consider refusing to perform the ceremony as a form of protest.

“It’s about equality,” said Karen Urquhart, the rector of St. Christopher’s Anglican Church in West Vancouver. “If we’re equal, the same rules should apply to everyone, regardless of gender.”

Same-sex marriage has been legal in Canada since Parliament passed the Civil Marriage Act in 2005, and the Anglican Church doesn’t prohibit same-sex marriage outright. In 2016, it said leadership at the provincial level could decide whether to allow it within their jurisdictions. 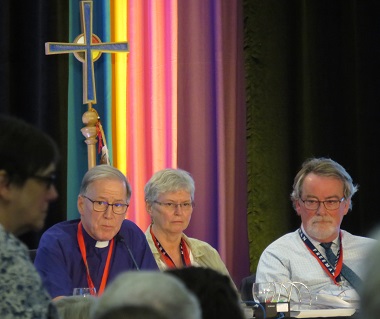 Primate Fred Hiltz (left) and many others in the General Assembly seemed shocked and distraught at the result.

At its national gathering in Vancouver on Friday, Anglican bishops voted down the motion, the last step in a years-long process to change Anglican church canon. The motion was required to pass with 67 per cent of the vote.

The vote passed amongst laypeople and clergy, said Anne Kessler, who works as a child, youth and family coordinator at Christchurch Cathedral in Vancouver and identifies as queer. But the bishops failed to pass the motion, with just 62 per cent voting yes.

The fact that the national church defeated the motion does not prevent dioceses from allowing same-sex marriages – and some already have been. But Skelton noted in her statement:

After General Synod, 2016, we as a Diocese held off on authorizing liturgies for the marriage of same-sex couples in the belief that the Anglican Church of Canada needed more time for the Spirit to work within the hearts and minds of its people and within its many convening bodies. As I see it, that work, though it has been painful, is well underway . .

The Diocese of New Westminster has been blessing same-sex marriages since 2002; that decision led to several congregations quitting the denomination.

The atmosphere was tense during the July 12 vote. When the results were announced, there was virtual silence and many clearly had a hard time accepting the decision. 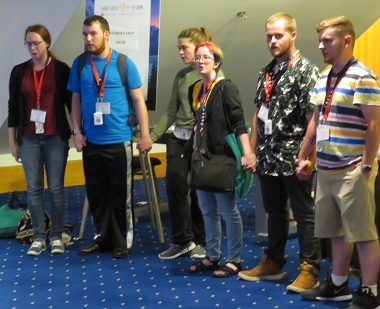 Several youth delegates assembled outside the hall to sing and lament the decision.

A July 15 article in the Anglican Journal began this way:

“Our children are crying.”

That was how Primate Fred Hiltz – paraphrasing the observation of delegate Michael Chartrand – described the pain in the room following the failure of the 42nd General Synod to pass a resolution amending the marriage canon, which would have allowed for the solemnization of same-sex marriage.

“Those words are going to haunt the Anglican Church for a long time,” says Sydney Brouillard-Coyle, a youth delegate from the diocese of Huron who identifies as gender non-conforming, queer and asexual. Though members of General Synod had long been preparing for upheaval after the vote on July 12 no matter the outcome, when the results finally came, the anguish it caused for LGBTQ Anglican youth almost defies description. . . .

The pain felt by queer youth delegates may have been particularly intense, but it was not unique. Across General Synod, pain and grief were the overwhelming emotions that followed the vote, both among those who voted for the resolution and those who voted against it.

Of course, there were many other issues dealt with at the General Synod, including election of a new primate (Linda Nicholls) and the passage of Indigenous self-determination measures. Go here for full coverage.

Editor’s note (July 19): John Stackhouse has written a very convincing comment about why traditionalists and progressives have so much trouble reaching agreement on the issue of same-sex marriage, and why that divide is likely to continue.

The City of Vancouver wants everyone to take part in its City-wide Plan. Here’s the invitation:

We want you to be part of the process.

Your input will shape both the planning process and the outcomes of the Vancouver City-wide Plan.

This process offers an exciting opportunity to establish a new standard for community involvement and meaningful civic engagement placing residents and their stories at the centre of this effort.

Over the next three years, there will be multiple opportunities to get involved in this process . . . help us shape the future of Vancouver.

So what is the plan? A July 17 Vancouver Courier article began with this:

The city will launch the first step in developing a city-wide plan this fall – the “listening” phase – after council approved on July 16 the budget and process for the multi-year project.

Goals of the new plan include addressing a wide range of issues, including reconciliation, housing, affordability, the economy, climate change and public amenities. Existing rezoning policies will remain in effect during the process unless council opts to update or change them based on new directions that evolve.

Some feel the plan will be all talk, no action, but my view is that it gives the Christian community (and the faith community more broadly) the opportunity to cooperate and get a proper hearing from the city – something that hasn’t been the case for a long time, if ever.

N.T. Wright has proved to have a lot of drawing power for Regent College.

Eminent theologian N.T. Wright has, not surprisingly, proved a major draw for Regent College. Next week he will be heard by thousands of people during a course and three public events (one of which, the Roundtable, is about him, rather than by him):

His course, which is full, will be held at a UBC classroom because of the number of students, “and the waitlist significantly exceeds the number of seats.” The public lecture at The Centre (Westside Church) is also sold out.

N.T. Wright, Professor of New Testament and Early Christianity, University of St. Andrews BA, MA, DPhil, DD (University of Oxford), is one of the world’s leading biblical scholars, and his work is widely read by lay people and academics. His writings on Jesus, Paul, eschatology and Christian origins have formed theological movements in these disciplines.

He is Professor of New Testament and Early Christianity at the University of St. Andrews, and was formerly Bishop of Durham in England.

Brent Unrau has experienced living in community and would like to invite others to consider it. He is inviting people to a One Day Intentional Community Event July 27. Here is his approach:

Are you interested in intentional community in its various forms? Would you like to learn more and discover steps you could take to help translate your curiosity into reality? Come meet people excited about exploring intentional community, learn from those who are doing it, ask questions and fan the flame of your interest.

The gathering will take place at Kingfisher Farm, former home of A Rocha Canada, in south Surrey.

International Day Commemorating the Victims of Acts of Violence Based on Religion or Belief – August 22, 2019 at All Day

← God’s timing – my timing
Eric Liddell: a champion at the Olympics and on the mission field in China →