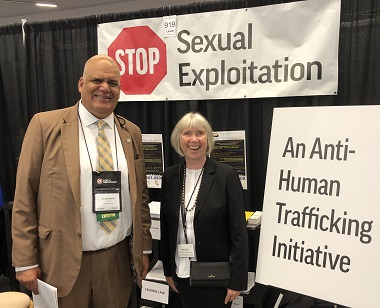 Cathy Peters is a tireless campaigner against human trafficking and she takes every opportunity to press her case – especially when there is an election looming.

Thus she made a point of attending the annual Union of BC Municipalities gathering (September 23 – 27), meeting with dozens of mayors and councillors, as well as other civic and provincial leaders.

She followed up with this email:

It was a pleasure to meet so many politicians last week at the UBCM Tradeshow.

ASK: Please write/email/speak to Premier John Horgan and Solicitor General Mike Farnworth to encourage them to not allow full decriminalization of prostitution in British Columbia. While it is a Federal issue, our Provincial leaders and Municipal leaders can give that feedback to Federal candidates and Federal leaders.

Please share this ASK with your City Councils and contacts. I look forward to hear from you,

FACT: In 1999, Sweden passed an innovative new law on Prostitution. Buying sex became a crime, but selling sex did not.  The sellers of sex are helped to transition from prostitution. With education and enforcement the law is a deterrent to buyers. This law is known as the Swedish or Nordic Model. Since then, the number of prostituted persons in Sweden has halved. The demand for buying sex has dropped and human traffickers have exited.  There is no evidence of an increase in  “hidden” prostitution. While initially skeptical, 70 percent of Swedes now fully support the law, especially youth. It has become socially unacceptable to buy a person for sex. A growing number of nations have adopted the Nordic Model including Iceland, Norway, France and Ireland. Canada adopted the Nordic Model in 2014. Canada can be true, north, strong and “prostitution free” if we educate, enforce and protect.

FACT:  Who are the sex buyers? Mostly men, 54 percent are married with higher than average education, heavy pornography use, misogyny present, fathers and sons, professionals and executives, pastors, police and teachers. 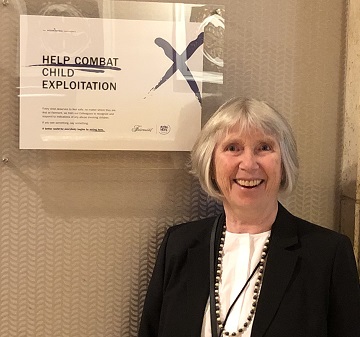 Cathy Peters would like to see human trafficking being taken seriously as a federal election issue.

Peters, a former inner city high school teacher who undertakes this work out of conviction rather than as a job, has made 200  presentations over the past six years to city councils, school boards, police boards, high schools . . . in short, to anyone who will listen.

And her work has been recognized; she has received awards from Coquitlam, Richmond and Surrey; from RCMP Headquarters Child Exploitation Unit and the Chilliwack RCMP detachment; and from the New Westminster, Delta and Vancouver Police Departments.

Her statement on Preventing Child Sex Trafficking in BC is posted on the BC Council for Families blog.

Peters focuses primarily on BC, but has volunteered with former MP Joy Smith (from Manitoba), who is noted for her fight against human trafficking across Canada and appreciates the work of Brian McConaghy, whose expertise with the RCMP helped him to combat child sex slavery in Cambodia and beyond (including playing a pivotal role in capturing ‘Swirl Face’ Christopher Neil).

Jack Taylor has written a couple of good articles about Peters’ work and related anti-trafficking efforts in The Light Magazine. Last year he wrote:

The picture she paints in her presentations to parents keeps attenders on the edge of their seats. Local girls of all ethnicities and social classes, who are 9 – 14 years of age, are the preferred choice of pedophiles and Aboriginal girls are wanted even younger.  Peters states that “$360,000 per year per victim” is possible for a trafficker whose girls provide service for between “10 – 60 men per night seven days a week.” “Sixty percent of prostituted women suffer full PTSD.”

Many children are lured through on-line friendships, through puppy trolling, through playground snatches. An astounding 97 – 99 percent of victims “who are lured, groomed, trapped, coerced, forced, kidnapped, tricked in to the sex trade industry” live with a “choiceless choice.”

Predators will start by paying extra attention to a target child – this can happen online through game portals, Facebook, Instagram, Kik, Pintrest, Tumblr, etc. where parents aren’t necessarily aware of the attention. In person, they may purchase gifts or treats for the child. They will touch the child in front of their parent, making the child think that the touch from this person is okay. They will pretend to have the same likes and dislikes and pretend to be a good friend and a good listener. They will try to find ways to be alone with the child and share off-colour jokes or pornography. Parents are then groomed so the individual can gain more access to the child through offers to babysit, etc.

Peters suggests that parents teach children about body safety at a young age – about grooming behaviours, about sharing when gifts are given by any adult, by warning them about listening to bad jokes or pictures, about sharing their feelings, about any adult who spends time alone with them. Education, openness and a lack of excessive overreaction will keep the channels of communication clear should anything be reported.

Go here for the full story. Taylor also wrote the first of a two-part series in the September issue of The Light: Sex trafficking – are Christian youth at risk?

Peters is an active local Christian, but says it has been much tougher getting into churches than into secular venues:

The church is ‘behind’ in exposing and addressing this important issue (in my view it is a pandemic because it is fueled by the internet and unregulated technology). The good news is that Jesus Christ is the answer . . . he alone can heal, deliver, cleanse, strengthen, comfort and redeem.

She does have some good opportunities lined up (and would be happy to hear of others; you can contact her at ca.peters@telus.net):

Learn how disciples of Jesus Christ can not only equip and safeguard their children and youth, but also pray, expose and stop this crime. Youth are encouraged to attend with their parents.

She will also be speaking at TWU Chapel October 22. Early next year she will have a booth at Missions Fest (where she has spoken more than once in the past) and will be addressing a gathering of Anglican churches in February. 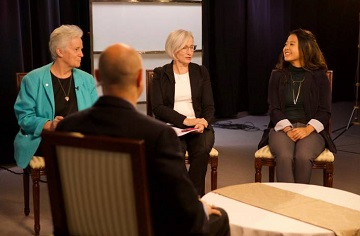 There are a few others in the local Christian community who take anti-trafficking seriously. Among them are Sr. Nancy Brown, Gwendoline Allison and Laura Lam, who spoke with Deacon Pedro Guevara-Mann of Salt and Light Media in an hour-long video released just a couple of weeks ago.

In Unbound: a Conversation Against Human Trafficking, they speak of:

. . . the reality of human trafficking for the purposes of prostitution. They address the church’s teaching, the situation in Canada, the connection between prostitution and human trafficking, our societal values that contribute to the industry and victimization of women and the Holy Father’s call to action on this issue.

The three women are opposing human trafficking in very different but complementary ways. Go here to watch the video.

1 comment for “Human trafficking should be an election issue”