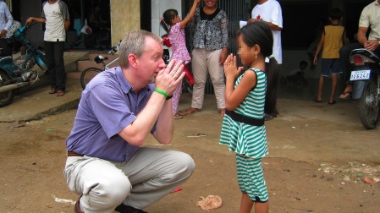 Brian McConaghy, founder of Ratanak International, will be a featured speaker at Missions Fest Vancouver (January 27 – 29).

I am a weapons specialist by trade and a highly trained forensic expert with 22 years’ experience in the RCMP. I am skilled in working with the dead. You might say that my skill set is not ideal for evangelism!

But what if God can use even me?

So often God uses our weaknesses and inabilities to accomplish more than we could ask for or imagine.

In 1989, I took a trip to Asia – the beginning of a journey that would completely change my life. I found myself on the Thai-Cambodian border in the middle of a war zone.

Based on my childhood in Belfast and my career in forensics, I was at home with loud bangs and stuck around to help a Christian team provide medical services to refugees through the shelling. There, the recent history and current state of Cambodia confronted me for the first time. I was appalled and determined to do something more substantial to help.

Returning home, I happened to see a documentary that featured a little Cambodian girl named Ratanak. Internationally sanctioned embargos prevented necessary medicine from getting into the country, so she was dying due to a lack of basic medication. The injustice appalled me. I had to do something so I decided to smuggle medication into Cambodia!

My plan was to bring two suitcases of carefully chosen medication into the country. However, God’s plan (with no consultation with me) was to provide nine tons of medication. The political correctness of a member of the RCMP smuggling nine tons of supplies through an international UN-supported embargo was doubtful, but I couldn’t get little Ratanak’s face out of my mind. I would proceed with what God had put on my heart, irrespective of the impact on my career.

To make a very long story short, the medication got through and was appropriately distributed. From there, my love for Cambodia and her people only grew. 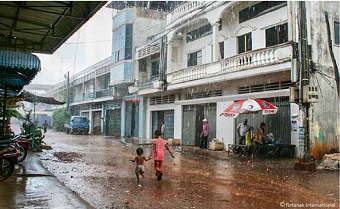 Ratanak International, a registered charity, was born and I would devote myself to this calling (while working full time in the RCMP to pay the bills).

During the civil war, we would build clinics only to have them blown up. Undaunted, we would rebuild and carry on. Clinics grew into hospitals, ambulance programs, agricultural development, schools, orphanages and emergency food distribution.

As our projects continued to expand, I was aware that huge problems had developed in the area of child sex slavery and human trafficking, but I was not involved.

The abuse of children was driven by the fact that, in the mid 1990s, international pedophiles had discovered that Cambodia’s post-genocide society was in tatters. The educated had been executed, the pillars of society had collapsed and the value of human life had been destroyed by the world’s most radical communist revolution.

It was in this poverty-stricken moral vacuum that organized crime, hopelessly corrupt police and legions of desperately impoverished families welcomed sexual predators armed with cash. If there was ever a perfect storm for the destruction of young women and girls, this was it.

Unlike sex industries elsewhere in the world that start the girls around 12 years of age, Cambodia stooped to a new low, starting both girls and boys in the brothels as young as five or six years of age. The implications for these little lives are absolutely devastating.

Meanwhile, I was content to work on development programs. I felt totally ill-equipped to deal with such overwhelming evil. Engaging in child rescue and rehabilitation carries many inherent risks. For this is a criminal industry, and the rescue of its young victims is no different than separating a drug dealer from his cocaine. These vulnerable and exploited young Cambodians are considered a product and they belong to criminals. This is not a process to engage in lightly. Thousands were enslaved, but I chose not to get involved: it was just too overwhelming.

That all changed on January 23, 2004. I was working on the investigation on Willy Pickton’s “pig farm” (the serial killer’s home just outside Vancouver) to process the body parts of so many murdered young women.

Through conversation with an RCMP member there, I was alerted to another investigation in Vancouver. A man had been arrested for torturing a local victim of prostitution, and upon his arrest videotapes had been seized that depicted his abuse of numerous victims. Among the victims were little Asian children, and the Vancouver Police wanted my assistance to identify which country the child victims were located. I agreed to watch the tapes.

Nothing in all my years of forensic work prepared me for those tapes. They were heart-breaking on a level that I simply cannot express. In those videos I was introduced to seven Cambodian children – seven little girls between the ages of seven and nine, seven little girls that would change my life.

Watching their abuse from a computer monitor as they helplessly stared at me obliterated any reluctance to engage in this issue. I immediately felt driven to seek, find and help these little ones.

But the chances of finding them were zero. They were trafficked slaves with no birth certificates, passports or identity.

They could be in any number of millions of locations.

However, in my viewing of those tapes, God had accomplished several things. He had made the issue personal. It was no longer about thousands of faceless victims. I was now seeing this issue as he saw it in all its personal intensity and torment. He also obliterated any reservation I had regarding my own abilities to cope with such an overwhelming tragedy.

While I had no way to find these kids, let alone impact the child slave industry, I didn’t care. I had to do something. In crossing that line, God finally had me where he wanted me – motivated, passionate and utterly dependent on him.

I was now engaged, but felt I had nothing to bring to the table. Would God show up?

That very night I went home and was watching NBC Dateline. The show was about (guess what?) child sex slavery in Cambodia. I watched the hidden camera footage of undercover investigators finding and rescuing little children sold into brothels and realized that the furniture, numbers on the doors, the pictures on the walls, even the kids were familiar to me – I had seen them only hours before in the evidence tapes! In a frenzy, I got in touch with the Vancouver investigation team.

In a matter of hours God had given me both the GPS locations of the crime scenes and, in a few days, the probable identity of the children.

God had also accomplished one more thing: it was evident that my investigational skills were just a footnote to the story he was writing. I could stop worrying about my skills and abilities, or lack thereof, and simply follow him in his work. He makes everything work together in ways I could never dream of, and his hand is especially evident in my weakness. 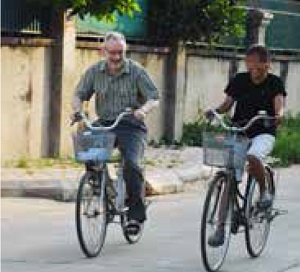 That file ultimately ended my RCMP career. It was clear that I needed to devote my life to serve those exploited in Cambodia. All those years in the RCMP now appeared to be training and preparation to cope with the emotional trauma I would confront in this new area of ministry. I did not feel ready, but God was.

That first investigation led to the development and funding of a high-security rehabilitation centre for children rescued from the brothel. Later came a transitional home, vocational skills training, social reintegration programs and repatriation services to support these young women as they began new jobs and lives.

Five of the original seven girls in those terrible videos were rescued. I did not meet them then; they were traumatized and had “met” way too many white males – but knowing they were safe was a thrill to me. I continued to pray for them.

Four years later, I discovered that these original five recovering girls had been transferred into a foster care program funded by Ratanak International. You can just imagine what a thrill it was for me to be invited to visit with them during my next trip to Cambodia!

The truck pulled up to the rehabilitation centre and we ran inside to escape the rain. From the group of girls that appeared to greet us, I could instantly pick out the five faces so familiar to me. Older now. No longer pained but beautiful, bright and animated. I was stunned, studying every detail of their smiles and drinking in the laughter and joy they expressed.

While the fight against child sex exploitation remains profoundly disturbing, it is evident through interactions like these that deep joy can be found in the darkest stories as God restores and heals lives.

Amidst unfathomable brokenness and pain, what a beautiful gift for these kids to encounter a God who loves them. A God who was born into poverty, who became a refugee, who had no place to lay his head, who would eventually be chased, hounded, captured, tortured, shamed and killed . . . a God these kids can relate to!

In meeting this God they discover, despite their circumstances, they have a passport and citizenship in another kingdom, a home prepared for them and a “Dad” better than they could ever imagine.

Such children are a challenge to my anemic faith. Despite the fact that they are considered a product to be used and abused and that their suffering is very real, they frequently express a measure of joy in life. For they have met Christ and discovered their profound value. They are “to die for” no matter how used and battered they come, and that changes everything.

So often in church we express our desire to be Christ-like, but we often domesticate our faith into something comfortable, something strangely palatable – while the example of Christ himself presents something much more challenging.

He was very clearly “a man of sorrows and acquainted with grief.” Being Christ-like must then involve, at least in some part, our willingness to acquaint ourselves with grief. Not so that we can wallow in suffering but rather that we, as his hands and feet, can share in the joy of bringing hope where there is none.

The injustice of human trafficking is offensive. It is something we would all sooner turn away from. Such circumstances present a world that is unimaginable to most of us. But what should the Christ-like response be? 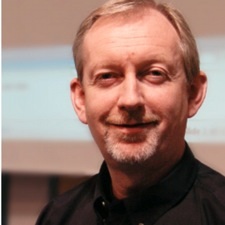 In acquainting ourselves with such grief, such suffering, we are not called to be merely offended but called to action! Circumstances that are overwhelming, offensive and unjust often present the greatest opportunity for us to be Christ-like.

For in such situations we don’t have the luxury of relying on our own strength or skills, but rather, we are forced to depend on his power.

This article is re-posted by permission from the Mission Fest 2017 magazine.