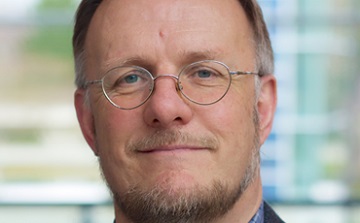 Iain Provan will be a keynote speaker at Regent College’s Pastors & Leaders Conference, Ambassadors: Christ in the Public Square.

The question of how Christians can wisely engage in the political issues of our times is more complex, nuanced – and important – than ever before. What does it look like for each one of us to stand up for, to advocate for, the ways of Christ?

In this informal interview by Julie Lane-Gay, Dr. Iain Provan, Marshall Sheppard Professor of Biblical Studies at Regent College, reflects on these challenges.

Provan will be a keynote speaker at Regent’s upcoming Pastors & Leaders Conference, Ambassadors: Christ in the Public Square (May 9 – 11).

Julie Lane-Gay: How might Christians affirm all people and their beliefs, yet still stand clear for the gospel?

Iain Provan: We are obliged to do both of those things by our own biblical narrative. Any big story that tells you that all human beings are made in the image of God requires that we treat everyone with respect – that we affirm their dignity – because whether they know it or not, they are image bearers of God.

Our obligations in this area are huge, as the God that creates also redeems – he calls the church to witness to the world. To do that, we have to stand apart and very often we have to take an oppositional stance out of love for the world, not out of some kind of tribal antagonism. Both of those things are required of us, even though they often create tensions for us.

Could you give me an example of doing that?

Part of the scandal of what happens, not just in the United States but in other parts of the world, is all too often the church gets drawn in and gets implicated in the tribal ideological polarities, rather than standing apart and bearing a different witness. In terms of racial reconciliation, all races are comprised of image bearers so we have to be, and absolutely should as a moral imperative, loving all people, even if and when they perceive us as their enemies.

As peacemakers, as reconcilers, as people hopefully with a wise but calm voice, these are all the things that churches should be doing in these contexts, and sometimes, they are doing them well.

If we are looking to Scripture, what are two essential truths for Christians? Where would you point people first?

After the creation story, I would go to the Abraham story and I would point out that Abraham is called out by God in order that all the nations ultimately will be blessed. The whole purpose of the calling of God’s people is not to call his people to escape somewhere else, but to work with God in God’s mission in the world – the Abraham story is fundamental to this. That covenant all builds on the creation story and on the Noah covenant, giving this global perspective right from the beginning.

What are two ways you would urge pastors to encourage their own congregations to become more involved in the public square?

Well, that’s complex – and the whole topic of the upcoming conference!

I would say that there are always two extremes to be avoided and pastors have to find their way through the middle of these, helping people to become pragmatically wise and virtuous people who can make good decisions.

I don’t think isolationism is an option – just coming apart from the culture and ignoring what is going on in the public square. I also think that Christians who come from that [isolationist] tradition, and then get very excited about this idea of working in the world, can make the mistake of thinking that the church’s sole purpose is to seize the levers of power and impose the kingdom of God on everyone else.

My observation is that God himself doesn’t do that in Scripture, so presumably we should not be trying to do that either. Between those two wrong extremes, I think we need to find wise ways – a kind of Daniel mode – to negotiate these challenges.

You have recently spoken of the crucial need for “critical thinking skills,” as Christians engage in the public square. How do we learn those skills and how might they strengthen our presence there?

If we can’t analyze and see things clearly, then we aren’t in a great position to make good decisions about what wisdom looks like. To be wise as serpents and harmless as doves requires, it presupposes, a critical engagement where you are able to sit back, see what’s going on and offer a critical analysis – and then the way becomes clear for you to act.

I don’t think the culture is teaching people, nor is the educational system, the critical thinking skills that we need to do this reflection or analysis. So, I think the church has to take responsibility for a fairly major educational component that is essential for our discipleship.

There are many ways of devising a curriculum – to say, pick up a newspaper, look at the headline piece and analyze what is the journalist trying to say, where is he coming from, what are his or her assumptions, and decide, do I agree with those, how would I respond. These are basic critical-thinking skill sets.

Why do you hope people will come to the upcoming Pastors & Leaders Conference?

I hope that people will come – whether they are pastors or leaders or interested laity – because this conference is very much designed to help people, in a very substantial way, to think further and to think well about the engagement of church and culture, particularly in Canada and the United States.

I imagine many of the folks will be coming from these post-Christendom contexts where the culture has been with the church to a large extent, at least in ethos and values if not in religious belief, for such a long time. It is critical that we see the need to relearn how to be a church under pressure – and potentially under persecution – holding minority views, in a rapidly changing environment. This conference is addressing topics that are very, very live, certainly for post-Christendom Christians.

At the end of the day these are issues that everyone is engaging with. Thinking Christianly about these issues is something we all need to do.

For more on the Pastors & Leaders Conference, Ambassadors: Christ in the Public Square, and the opportunity to hear Iain Provan speak further on these challenges, click here.

For more on the other keynote speakers – including Mike Baird, former Premier of New South Wales – go here, and here for workshop leaders.