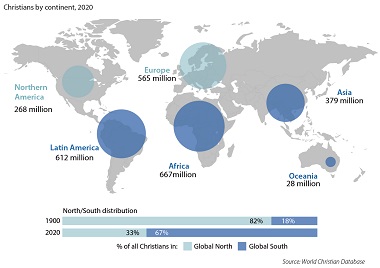 One of the major religion-related news headlines today revolves around the decline of Christianity in North America.

Yet, over the last century, there has been a pronounced shift of Christianity from the Global North to the Global South, with dramatic growth of Christian populations in places like sub-Saharan Africa and East Asia.[1] This phenomenon appears to be continuing in the 21st century.

This article provides a nuanced analysis to a big, global question about the world’s largest religion: is it shrinking, or is it shifting?

The World Christian Encyclopedia, 3rd edition,[2] helps to answer this question by presenting a portrait of Christianity that is truly global. By ‘truly global’ we mean in the sense that Christianity is present in every country and among many peoples, but more fundamentally in its contextualization in the world’s cultures and its engagement with the rest of humanity.

Africa became the continent with the most Christians in 2018, surpassing Latin America (which surpassed Europe in 2014).

This marks a milestone for African Christianity and raises several important issues related to Christianity’s shift to the South. Are Christian resources also shifting? Is theological writing shifting? Are global histories of Christianity being written? 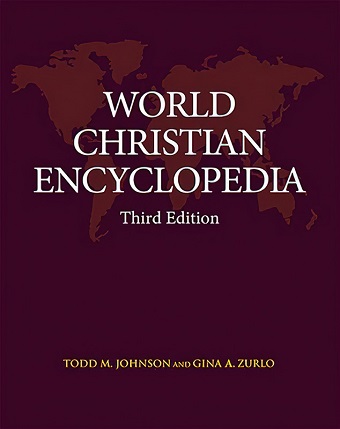 The World Christian Encyclopedia represents the most comprehensive attempt to quantify adherents of Christianity and other world religions.

The 50-year sustained effort has documented affiliation to 18 religious/nonreligious traditions in the past, present and future, plus details on Christianity down to the denominational level in each of the world’s 234 countries.

For the third edition, researchers contacted every known denomination in every country of the world for updated information on their affiliates. In-country experts and church leaders helped verify figures and review data, especially in difficult access countries.

In this sense, the core of the Encyclopedia remains the same with reliable, well-researched quantitative data on Global Christianity and other religions. At the same time, this edition enhances its presentation of Christianity around the world by moving beyond the standard categorization of the previous two editions.

Each country’s narrative text includes information on what is unique to Christianity in that context, such as theological education, gender, health care, climate change, violence, politics or other contemporary trends. As a result, the third edition is more contextualized to the lived experiences of Christians around the world.

Many changes in the nature of World Christianity have made this kind of demographic research more difficult.

Traditional denominational structures are much looser than they used to be, with a significant amount of double-affiliation between traditions (for example, many baptized Catholics are now Pentecostals) and blurrier lines regarding church membership.

Historic Protestant denominations are losing members to Independent churches unconnected to any kind of structure or network, which are much harder to track. Reports of massive growth in underground Christian communities in Asia are difficult to verify.

Pentecostal/Charismatic Christianity is experiencing the fastest growth, but for many reasons these churches, especially in Africa, can be difficult to contact.

Nevertheless, the Encyclopedia represents our best efforts to answer a pressing question related to Christianity worldwide: shrinking or shifting? The answer, perhaps unsurprisingly, is both.

The percentage of the world that is Christian has changed very little over the last 120 years. In 1900, 34.5 percent of the world was Christian; in 2020, the figure is 32.3 percent. This relative stability, however, masks dramatic changes in Christianity’s demographics.

The bar chart (at the top) reveals that 82 percent of all Christians in 1900 lived in Europe and North America; by 2020 this figure had dropped dramatically to 33 percent. The shrinking in the Global North and the shifting to the Global South is the essence of World Christianity’s characteristics at the start of the 21st century.

Like the rest of the world, Christianity is also becoming increasingly urban, with the rise of cities in the Global South with large Christian populations, like Lagos and Kinshasa. The perception of Christianity around the world today is that it is a white religion, which is fair because for the last 1,000 years or so, it was. White, western history, theology, and training were dominant and were exported around the world for centuries.

However, despite the perception, the reality is that Christianity is a majority non-white religion. Christianity’s shift is also evident in the mother tongues of Christians: the language with the most Christian speakers is Spanish (because of Latin America, not Spain), followed by English, Portuguese (because of Brazil, not Portugal), Russian (because of the Russian Orthodox), and Mandarin Chinese.

However, to really tease out the shrinking versus shifting question, a continental approach is required. 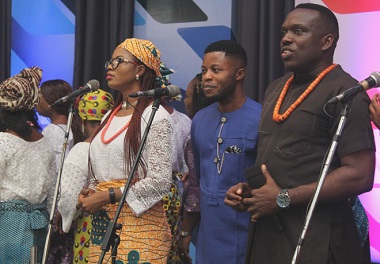 The church has grown dramatically in Africa.

In many ways Africa is hailed as the ‘success story’ of World Christianity, growing from 9 percent Christian in 1900 to 49 percent in 2020. The Democratic Republic of the Congo is the most profound, rising from 1 percent to 95 percent over that same period.

However, the narrative of growth hides the fact that Christians in Africa have fewer physicians, higher infant mortality rates, lower life expectancies and higher rates of HIV and malaria, as well as less access to safe drinking water. The DRC is also often called the ‘rape capital of the world’.

Asia is known for its religious diversity, and Christianity grew on the mammoth continent from 2 percent in 1900 to 8 percent in 2020. The fastest growth was found among house churches in China, which represents 56 million Christians today.

The last case for shifting is found in Oceania, where Australia and New Zealand dominate the demographics because of their size (and are declining in their Christian percentages) but profound religious change occurred in Melanesia, Micronesia and Polynesia over the 20th century, regions that are all majority Christian today.

Now, for the shrinking. Europe has become less Christian over the past 120 years, from 95 percent to 76 percent, though it is widely known that most Christians formally affiliated to churches in Europe are not active participants nor practitioners.

North America has also experienced a decline (97 percent to 72 percent) but it is also the continent home to the country with the most Christians, the United States. The decline of white Christianity in the USA has been somewhat offset by the increase of immigrant Christians – documented or otherwise – largely from Latin America.

Latin America in many ways complicates the ‘shrinking vs. shifting’ question. Its over 500 years of Catholic history plus its geographic location in the Global South makes it a bit of an anomaly. The region has experienced a slight decline, from 95 percent to 92 percent, but this masks the tremendous rise of Pentecostal/Charismatic Christianity, which rose from 0 percent of the population in 1900 to nearly 30 percent in 2020.

The most important case for the shrinking of Christianity is the North Africa / West Asia region, which includes Iraq, Syria, Israel, Palestine and Turkey. This region has been under enormous pressure in the 20th and 21st centuries and has experienced a precipitous drop in its Christian population, from 12.7 percent to 4.2 percent in 2020. Turkey in particular was 22 percent Christian in 1900 and is only 0.2 percent Christian today.

To return to an earlier set of questions: Are Christian resources also shifting? Is theological writing shifting? Are global histories of Christianity being written?

Meeting the social needs of people is integral to Christian witness, theology and ministry for poorer Christians in the Global South. For churches in the North and their missionaries, poverty and AIDS in the South cannot be ignored, nor can assistance be granted from a position of power, but only with humility and in acknowledgment of an inequity crisis within Global Christianity.[3]

As Christians, we belong to at least two global families.

First, we were born into the human race – this beautiful mosaic of peoples, languages, ethnicities, religions and cultures. While we celebrate the joys of being part of this rich tapestry, we are increasingly aware of the challenges of being woven together in it. Having the knowledge and resources to live well, we still flounder when trying to work together to ‘save’ our planet. World leaders strongly disagree on trade, global warming, nuclear weapons and a host of other issues.

And yet, despite such differences, the human family overflows with creativity, producing technological marvels, impressive structures, dazzling works of art, poignant films, beautiful music and stunning works of literature. Ours is a resourceful, chaotic family and we are glad to be a part of it.

Second, we belong to a global Christian family made up of 2.5 billion people (about a third of the human family). With Christians found in every country of the world, we are not homogeneous or monolithic, but a diverse assembly representing thousands of peoples and languages.

We are Catholic, Orthodox, Protestant and Independent by major tradition; some of us are Evangelicals, Pentecostals or Charismatics, or a combination of these. In addition, there are likely as many as 45,000 denominations! We may speak the local language, but we are all related to each other by our global faith.

Unity is a worthy goal for our global Christian family. We follow Jesus, after all, to whom family not only designated one’s immediate biological relatives but included all who are knit together in faith. Our global Christian family is defined by the interaction and sharing among different local forms of Christianity. While we work out that faith in our local contexts, we share a global awareness of our common faith and global family identity.

Gina A. Zurlo holds a PhD in History and Hermeneutics from Boston University School of Theology (2017). She is the Co-Director of the Center for the Study of Global Christianity at Gordon-Conwell Theological Seminary (South Hamilton, MA) and Visiting Research Fellow at Boston University’s Institute on Culture, Religion and World Affairs. She is the co-author of the third edition of the World Christian Encyclopedia.

Todd M. Johnson (PhD, William Carey International University) is the Eva B. and Paul E. Toms Distinguished Professor of Mission and Global Christianity and co-director of the Center for the Study of Global Christianity at Gordon-Conwell Theological Seminary. Johnson is Visiting Research Fellow at Boston University’s Institute for Culture, Religion and World Affairs, leading a research project on international religious demography. He is co-author of the World Christian Encyclopedia (2nd and 3rd editions).

This article originally appeared in the March 2021 issue of the Lausanne Global Analysis and is published here with permission. To receive this free bimonthly publication from the Lausanne Movement, subscribe online at www.lausanne.org/analysis.

← Churches restive as government hints at looser COVID-19 restrictions
A tough year for Christian camps, but summer camp is on! →

2 comments for “Is Christianity shrinking or shifting?”