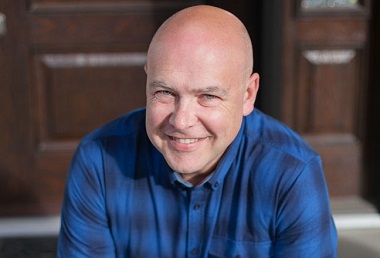 Brian Doerksen and his wife Joyce have two sons with fragile x syndrome. “Life is a journey of learning to trust God,” he says,

“God, this is just too hard,” Brian Doerksen prayed. The award-winning singer/songwriter had just discovered that his year-old son, Isaiah, had fragile X syndrome, a genetic abnormality that causes severe learning disabilities. Worse yet, Isaiah’s older brother, Ben, had been diagnosed with the condition a few years earlier.

“Doctors told me and my wife, Joyce, that our boys would never fully speak and would require care for their entire lives,” Brian remembers. “It was such a tough blow. It was like all of our dreams for our boys were gone in that one pronouncement.”

Fragile X syndrome would impact every aspect of Brian and Joyce’s lives, but over the last 20 years, they’ve discovered the gift of this unexpected journey.

Born and raised in Abbotsford, Brian grew up attending church and describes it as more of an obligation than a joy. But when he was 16, he had a profound encounter with God in which he was acutely aware of his own brokenness and sinfulness. “At the same time,” he says, “I felt God’s overwhelming love for me. That was when I made a true commitment to faith.”

Before his encounter with God, Brian had been playing basketball for his high school team. “I was doing pretty well and I had plans to buy a cool car,” he says. “After that night, I lost interest in all of it. I went to my coach and told him I couldn’t be on the team anymore.”

That’s when Brian picked up a guitar. “I’d taken a guitar class in grade 8 and I just did dismally,” he laughs. “I took a few lessons, but mostly I learned from trial and error.”

Brian would play the guitar when his parents hosted worship meetings in their home. It was then that Brian first thought of becoming a pastor and pursuing music as a career.

Around that time, Brian began dating Joyce. The couple married the week after Brian’s 19th birthday. “My father wanted me to be able to sign the marriage certificate myself, and the age requirement was 19, so that was why we waited,” Brian explains.

For several years, Brian worked as a worship pastor at a church in Langley. He began writing and recording his own songs, and was a featured worship leader on many albums released by the Vineyard Music Group. He released his first solo album in 2002.

Music wasn’t the only thing keeping Brian busy. He and Joyce now had six children, four daughters and two sons. “Each time I held one of my children for the first time, I realized how unbelievably blessed I am,” Brian says. “Two of the girls are twins, so holding two babies at the same time was one of the highlights of my life.”

But parenting has included some unexpected challenges for Brian and Joyce. “We noticed that our older son, Ben, wasn’t meeting developmental milestones the way our daughters were,” he says. “That’s when we learned he had fragile X syndrome.”

Joyce had just given birth to the couple’s twins when Ben was diagnosed. “Doctors told us that we had a 50/50 chance of any future children having fragile X,” Brian says. “We decided to take that risk and have a sixth child. When it was confirmed that Isaiah also had it, we were devastated.”

The diagnoses changed Brian’s faith. “I used to say ‘I know’ when it came to my faith in God,” Brian says. “Now, instead of claiming I know anything, I say, ‘I don’t know, but I trust Him.’ Life is a journey of learning to trust God. And while parenting remains a challenge, my boys have this incredible way of keeping Joyce and me in the moment, and even without words, they teach us so much.

“When you have a child with severe special needs, the grief comes in layers,” he continues. “My dad and I have always had these wonderful, deep conversations and I looked forward to doing that with my own sons. But because of the boys’ disabilities, deep conversations are not possible. Instead, I have these amazing, affectionate boys who show their love through hugs, rather than words.”

Shortly after Isaiah’s life-altering diagnosis, Brian was walking the streets, thinking about his life. In addition to all this, he and Joyce had recently sold their home and used the proceeds in a failed attempt to keep his stage musical, Father’s House, alive. “I was broken and confused and barely hanging on to my faith,” Brian recalls. “And then these song lyrics just came to me.”

The lyrics became one of Brian’s most popular hits, Come, Now is the Time to Worship.

In 2009, Brian wrote a book entitled Make Love, Make War (Now is the Time to Worship). “Each chapter of the book takes one of my songs and describes the spiritual message behind it,” Brian notes. “And then it offers tips for emerging songwriters. I’ve always felt the call to help the next generation of worship leaders.”

And that’s exactly what Brian is doing today. In 2013, he was offered a position teaching worship arts at Prairie College in Three Hills, Alberta.

“The first thought I had was, How can we do that when we have two special needs sons to care for?” Brian says. “But when God wants you to do something, He makes a way.”

Brian commutes between the family home in Abbotsford and the Three Hills campus. “Joyce and Isaiah come out for a few weeks each month, and we make it work.” 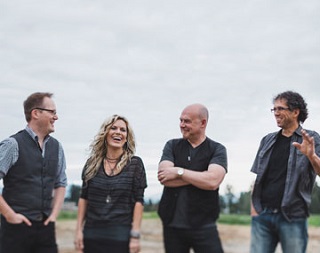 The SHIYR Poets, from left: Calum Rees, Teresa Trask, Brian Doerksen and Brian Thiessen, will release their second album focused on the Psalms in September.

Brian is also involved in a band called The SHIYR Poets. The group’s focus is setting the Book of Psalms to music with a folk-rock flavour. Their first album, Songs for the Journey, explored the first 10 Psalms and volume two will be released in September.

“This journey is a challenge, but it has helped me move my centre of gravity from my head to my heart,” Brian says. “I’m no longer interested in rigid answers about religion and life. Our faith is about the loving relationships we build with God and with one another.”

This article is re-posted by permission; it was originally published in Faith & Friends, June 2016. Photos courtesy of Brian Doerksen.