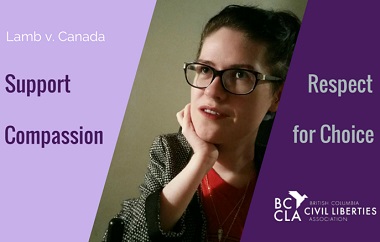 The BC Civil Liberties Association has already launched a legal challenge to Bill C-14.

‘Medical assistance in dying’ legislation (Bill C-14) was passed in haste, amid controversy, earlier this month. The BC Civil Liberties Association (BCCLA) has wasted no time in launching the first legal challenge, hoping to broaden the scope of the law still further.

The BCCLA and Julia Lamb, a 25 year old woman from Chilliwack, who has Spinal Muscular Atrophy, a progressive neurodegenerative disease, launched the challenge June 27.

Grace Pastine, litigation director for the BCCLA stated, “This legislation is clearly unconstitutional. It deliberately excludes a class of Canadians – those who are suffering with no immediate end in sight. How can we turn away and ignore their pleas?”

The political battle is over, for the moment, but Minister of Justice Jody Wilson-Raybould has said that changes – presumably in the direct of liberalization – are possible in the future.

Following are two comments which can guide our prayer and action. The first is by the Evangelical Fellowship of Canada (EFC) and the second is from the Canadian Conference of Catholic Bishops (CCCB).

The EFC released this statement June 17, the day Bill C-14 was passed into law.

Legislation establishing a framework for the provision of assisted suicide and euthanasia across Canada has passed the Senate and received Royal Assent.

Canada has crossed a significant threshold. The EFC is fundamentally opposed to assisted suicide and euthanasia. We lament the decision to legalize these practices in Canada. These practices will undermine our societal respect for the sanctity of human life and will place vulnerable people at risk. This will also shift our health care system from a presumption for life to one in which a patient will feel the need to justify not choosing death.

The Bill is more restrictive than the language of the Supreme Court’s Carter decision. It will make euthanasia and assisted suicide available to competent adults with an incurable illness, disease or disability who are in an advanced state of irreversible decline in capability and whose natural death is reasonably foreseeable.

The legislation is also much more restrictive than what was proposed by the Joint Committee of the House and Senate, which made a series of recommendations to the Federal Government earlier this year.

There is still much work to do. The boundaries set by the legislation will be challenged by those who want to see access expanded to persons who aren’t terminally ill, whose suffering is psychological, or to minors.

This law does not offer adequate conscience protection for medical practitioners or institutions that object to providing assisted suicide and euthanasia. These freedoms will need to be fought for in each province and territory.

For the EFC’s very useful nine-page overview of the new legislation’s passage, what it does and issues of concern going forward, go here. 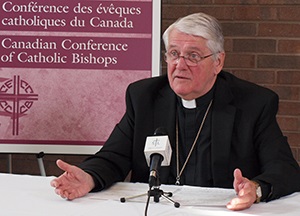 On June 27, Douglas Crosby, OMI, Bishop of Hamilton and President of the Canadian Conference of Catholic Bishops posted this statement:

The recent approval of Bill C-14, which legalizes euthanasia and assisted suicide in our country, stands as an appalling landmark decision to the utter failure of government, and indeed all society, to care truly, authentically and humanely for the suffering and vulnerable in our midst.

We live in a country where the vast majority of the dying cannot access quality palliative or home care, where rates of suicide in many Indigenous communities are staggeringly high, and where it is suggested that the lives of vulnerable, chronically ill and disabled persons are not worth living.

Paradoxically, and most unfortunately, our society has now enshrined in law that killing is a respectable way to end suffering. Our country’s growing inability to recognize the sanctity of human life is staggering and deeply troubling.

No institution, person, ideology or legislation is entitled to threaten or undermine the sacredness of both the dignity of each individual person and the very gift of life itself. We are called, as a community of compassionate individuals, to respect and protect the continuum of life from conception to natural death, honouring a vision of the human person in his/her present earthly existence as well as life beyond the grave.

Catholics and indeed all people of good will have a moral and societal obligation to protect the vulnerable, comfort the suffering and accompany the dying. The Bishops of Canada hope and pray that with all our Catholic brothers and sisters and our fellow Canadians, each of us and our society may experience a greater conversion of heart so as to recognize the image of God so profoundly imprinted on every human life, whatever that person’s state, level of comfort or degree of productivity and societal contribution.

The intentional taking of any human life – be it an elderly person, a child, a vulnerable adult, an embryo, a dying person – is truly a grave and morally unjustifiable act. Our society needs to reject all offenses against life itself: murder, genocide, suicide, abortion, euthanasia and physician-assisted dying.

The purposeful termination of human life via a direct intervention is not a humane action whatsoever. We ought to look instead to minimizing the pain and suffering of the dying and those who are tempted to end their lives, not eradicate their existence.

Let us strive to help the sick and incapacitated find meaning in their lives, even and especially in the midst of their suffering. Let us comfort those facing terminal illness or chronic conditions through our genuine presence, human love and medical assistance. Let us, as a society and as individuals, choose to walk with them, in their suffering, not contribute to eliminating the gift of life.

Declaring physician-assisted suicide a ‘right’ is not true caring and not humane in the least. It is ultimately a false act of mercy, a distortion of kindness to our fellow man / woman.

The new legislation seems to insinuate that a human being, a person, ceases to be a person and loses his/her very dignity simply because of a loss or diminishment of a number of physical and mental capacities. It is untrue.

What is true is that our own humanity is weakened when we fail to care for the weak and dying, and when we purposefully fall short of considering them, with all their ailments and limitations, as persons worthy of life.

True human compassion invites us to share the other’s pain, the other’s journey – it is not meant to do away with the person. Physician-assisted suicide is an affront to what is most noble, most precious in the human endeavour and a grave injustice and violation of the dignity of every human person whose natural and inherent inclination is indeed the preservation of life.

We ought to surround our sick and dying, our vulnerable and disabled, with love and attention, with care and true life-giving compassion. This is why palliative care continues to be undeniably the only moral, effective and much-needed alternative, the only compassionate choice, now that our country has embarked upon this perilous road.

Saint Joseph, patron of Canada and patron of a good death, pray for us.

1 comment for “Assisted suicide: Lament our government’s failure – and look ahead”