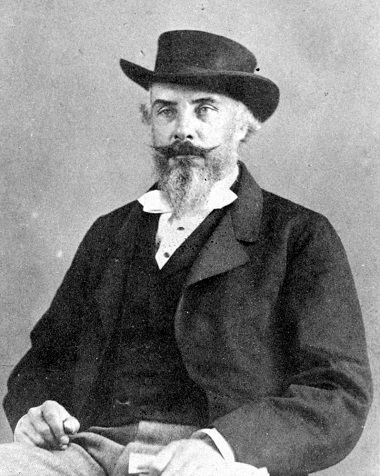 Justice Matthew Begbie is one of BC’s best known historical figures, but the Law Society of BC has removed his statue from their lobby. Photo: G.R. Fardon, BC Archives.

Justice Matthew Begbie is a larger than life figure in BC’s history, but he was also a man of his times. And the debate over who-from-the-past-should-be-remembered-where (Robert E. Lee, Edward Cornwallis, John A. Macdonald . . .) has now caught up with him. The ‘Hanging Judge’ has been hung out to dry.

This spring the Law Society of BC announced it would remove a statue dedicated to ‘The Honourable Sir Matthew Begbie, Lt., First Chief Justice of British Columbia’ from its lobby.

That decision passed with relatively little comment, as far as I can recall. Vancouver Sun writer Susan Lazaruk did a fair job of covering the decision in her April 13 article.

The Law Society of BC has announced it will remove a statue of Justice Matthew Begbie, who sentenced six native leaders to death before Confederation and became known as BC’s “hanging judge,” because it’s a colonial symbol that offends natives.

“The presence of the statue is offensive to them (indigenous people) and affects their current experience with the law society,” the society said in a statement. It’s a “reminder to them of the province’s colonial past and Justice Begbie’s role in the hanging of six Tsilhqot’in chiefs.”

“As a step toward reconciliation, the law society will remove the statue of Justice Begbie from its lobby and replace it with a more unifying and inclusive symbol in due course.”

Go here for the Benchers’ minutes from their April 7 meeting (pages 6 – 7).

Lazaruk noted that the removal of the statue was related to implementation of Truth and Reconciliation (TRC) recommendations, quoting from Grand Chief Edward John. John, who addressed the Benchers, is Hereditary Chief of Tl’azt’en Nation and North American representative to the UN Permanent Forum on Indigenous Issues, as well as being co-chair of the Law Society’s truth and reconciliation advisory committee.

BC Premier Christy Clark declared the [six Tsilhqot’in] chiefs “fully exonerated of any crime or wrongdoing” in a ceremony in Quesnel, more than 150 years after the chiefs were hanged after they attacked and killed 20 non-natives in a clash known as the Chilcotin War.

Lazaruk described Begbie as “a controversial figure,” referring to some of his good qualities and noting that “he still has his supporters.”

It is interesting to compare her decidedly mixed portrait with one offered by Stephen Hume in The Vancouver Sun just two weeks earlier, as part of its ‘Canada 150’ series of profiles of 150 noteworthy British Columbians. His was almost entirely positive; here’s a portion:

British Columbia’s first chief justice is often called “The Hanging Judge.” In fact, Matthew Begbie was progressive, lenient, championed the rights of indigenous and other minorities exposed to racism, and didn’t hesitate to speak truth to power — in his case, colonial authorities. . . .

When the family settled in the Channel Islands in 1826, Begbie excelled in languages and enjoyed mathematics, music and art. He attended Cambridge University. He was a comfortable lawyer when in 1858 he was asked to serve as a judge in British Columbia. American miners from California were causing civil disorder, threatening First Nations, other ethnic minorities and each other with vigilante violence.

For the rest of the article go here.

An article by Ed Hird, rector of St. Simon’s Church North Vancouver, picks up on many of the same themes, but also highlights Begbie’s Christian faith:

A deeply spiritual man and long-time church choir member, he loved to read the Anglican Evening Prayer Service by campfire, singing hymns before going to his tent. . . . When [he] died in 1894, his two favourite hymns were sung: ‘Just as I Am’ and ‘I Heard the Voice of Jesus Say.’ 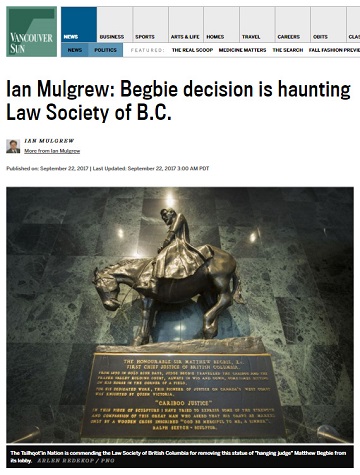 A September 22 article by Ian Mulgrew in The Vancouver Sun (‘Begbie decision is haunting Law Society of BC’) suggests that all may not be lost for the pioneering judge:

The [law] profession’s blue-chip journal, The Advocate, has rallied to defence of the province’s first chief justice.

In its unsigned editorial column entitled Entre Nous – Between Us, the august publication this month says that the move is “perhaps [more] a step in the wrong direction – than a purposeful and reasoned step toward reconciliation.”

“By removing the Begbie statue from the Law Society lobby, our governing body is now telling us that Begbie’s legacy has but a single dimension which is antithetical to truth and reconciliation,” asserts the magazine that goes to every lawyer in the province. . . .

The editorial acknowledged a certain amount of anxiety about wading in on the issue “but just as the first tentative steps into the ice-cold mountain lake can result in a terrified skip back up the slope, usually it is the icy plunge itself that yields the better reward.”

It then proceeds to kick the intellectual stuffing out of the society’s decision – citing the historical record to show the renowned legalist was ahead of his time and a supporter of Indigenous people.

I found myself nodding my head as I read this assessment, from Susan Lazaruk’s article:

“Begbie did a lot that was good by bringing in common law and keeping peace in the gold fields,” said Mary-Ellen Kelm, an SFU history professor. But “he also hanged six chiefs who were simply trying to defend their land and their people.”

She said some people may not like it when statues are removed but people are symbols of the past and “it’s time for us to disrupt those symbols. We’re in a moment of disruption.”

She rejected the argument that the statues should remain because the public can be educated about the dark parts of our past because “it’s pretty hard to tell the story of the Chilcotin War on a plaque” and said there are other ways to educate.

However, I was also impressed by these concluding words from the Advocate opinion piece:

With great respect to the intentions of the parties, we think the recommendation to remove the Begbie statue and the acceptance of that recommendation are both misguided.

Yale historian John Fabian Witt posited a test for renaming or removing references to historical figures. It was recently modified for a Canadian perspective by Peter Shawn Taylor, editor-at-large of Maclean’s.

The test is as follows:

• First: Is the principal legacy of the namesake fundamentally at odds with Canadian values? This requires a broad understanding of the life’s work of the individual in question.

• Second: Was the relevant principal legacy significantly contested during the namesake’s lifetime? Isolated statements or actions considered controversial today may have been conventional wisdom at the time. Context matters.

• Third: At the time of the naming, was the namesake honoured for reasons fundamentally at odds with Canadian values? Why was this person commemorated?

• Finally: Does the building play a substantial role in forming community? The more prominent the edifice, the greater the case for retaining names of historical significance.

If the benchers had been so inclined, how might they have applied the Witt test? We fear that the rush to reconciliation has trampled a principled approach with one unintended consequence being estrangement rather than reconciliation of interested parties.

We can hope for a just and reconciling outcome to this situation, but I’m not optimistic. Not too long ago, the Law Society of BC Benchers first approved the TWU School of Law and then caved in to pressure and reversed their course. Clearly the Benchers know how to change their minds, but will they take the time and effort to work through the issues in a just manner?

← ‘Your name is Bridge’: Personal call to reconciliation shared with whole church
A public advocate for Christian principles and religious freedom tells her story →

3 comments for “Justice Matthew Begbie: Has the Law Society of BC treated him fairly?”