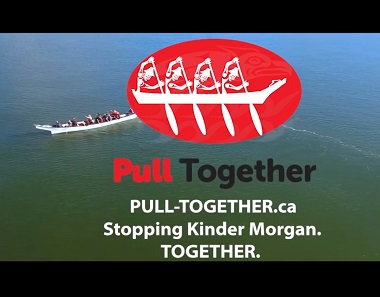 The Pull Together campaign mobilizes ‘The People vs Kinder Morgan’; some church groups are on board.

Opposition to the Kinder Morgan’s Trans Mountain Pipeline proposal runs deep in Vancouver. Five people were arrested for mischief October 28 following a protest in the waters near its Westridge Marine terminal in Burnaby. Their declarations that many more will join them in civil disobedience did not ring hollow.

No doubt Christians are all over the map on the issue – as on so many others – but many oppose the pipeline. In particular, many are sympathetic to the case made by the Tsleil-Waututh and Squamish nations on the North Shore, as they seek to protect their unceded historic territories.

Some Christian groups are taking part in Pull Together, which encourages individuals and groups to “stand with Indigenous peoples: support legal challenges to stop Kinder Morgan’s pipeline and tankers project.”

Pull Together makes this plea:

Kinder Morgan’s pipeline and tanker project poses unacceptable risks to our oceans and waterways, our climate, local economies and communities. It must never be built. First Nations have vowed to stop it in court. People, businesses and communities are raising funds to support the cases and stop this pipeline, together. Join us: donate, organize or set up your own online fundraiser!

I have come across a couple of church-based events supporting Pull Together so far. 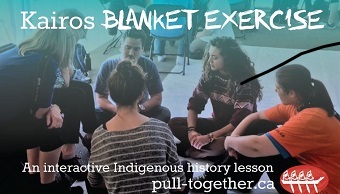 This Friday (November 3), the Kairos Blanket Exercise will raise money for Pull Together at Vancouver First Christian Reformed Church:

The Kairos Blanket Exercise is an experiential teaching tool incorporating the major themes and findings of the 1996 Royal Commission on Aboriginal Peoples.

The exercise builds awareness and understanding of our shared history as Indigenous and non-Indigenous peoples in Canada by having participants literally walk through situations that include pre-contact, treaty-making, colonization and resistance. This exercise reaches both the mind and the heart, contributing to a movement for reconciliation through education.

Kairos is an ecumenical group in which “10 churches and religious organizations work together in faithful action for ecological justice and human rights.” They include the Anglican, United, Catholic, Presbyterian, Lutheran and Christian Reformed denominations. The Blanket Exercise will have a BC focus.

Earthkeepers: Carols for the Climate 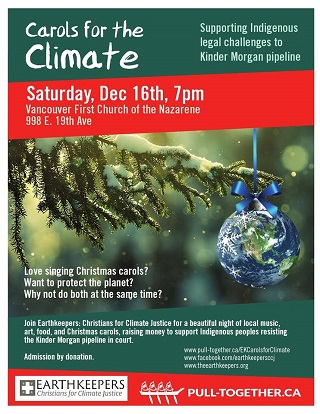 Earthkeepers will take part in Pull Together with Carols for the Climate, December 16 at Vancouver First Church of the Nazarene:

As Christians, we believe that God loves this world and created it good. When faced with projects that harm this world, our love for God demands that we say “No!,” so we can say a full “Yes!” to the health and well-being of this planet and all who call it home.

As Christians, we believe that reconciliation is at the very heart of God, and that reconciliation requires changing our behaviour. Confronted with Canada’s ongoing legacy of colonialism, as made nationally evident by the recent Truth and Reconciliation Commission, we desire to forge relationships of mutuality and trust as settler and Indigenous alike. We want to learn to take leadership from First Nations rather than assuming it is ours to take.

The first two reasons are why Earthkeepers is joining with the Pull Together campaign to raise money for the Tsleil-Waututh, Squamish and numerous other First Nations as they resist the Kinder Morgan pipeline in court.

The third reason is why, to help raise that money, we’re organizing Carols for the Climate, an evening of local music and art, good food and friends, and yes, carolling, and inviting you to join us!

Here are some articles on Church for Vancouver making the case for the importance of protecting the environment – and of civil disobedience, in some cases – from a Christian point of view:

A Rocha: Intro to Creation Care 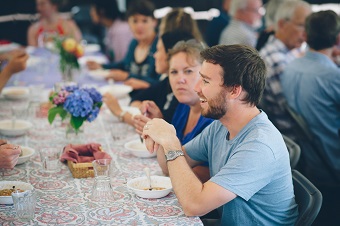 Another event – not related to Pull Together, but which will no doubt touch on related issues – is A Rocha’s Intro to Creation Care workshop November 16 – 18:

Join us at the Brooksdale Environmental Centre for an interactive weekend workshop on creation care! Together we will dig into theological themes of earth-keeping through study, discussion and hands-on experience.

We look forward to sharing meals and life with you as you bring your questions and explore the practical outworking of creation care in your personal life and work.

The weekend will be facilitated by Sarah Wildeman, the A Rocha BC internship coordinator.