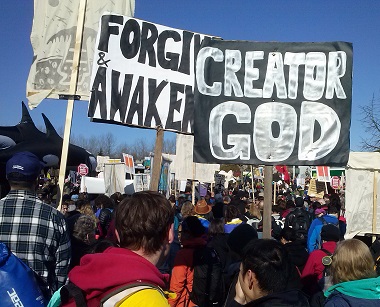 Last Saturday (March 10) I and several other members of Earthkeepers: Christians for Climate Justice marched with thousands of people against the proposed Kinder Morgan pipeline expansion.

Led by members of the Tsleil-Waututh Nation, as well as other nations from across the continent, we trekked two kilometres from Lake City Way SkyTrain station to the outskirts of Kinder Morgan’s tank farm on the south side of Burnaby Mountain.

There the Tsleil-Waututh nation set up a kwekwecnewtxcw, or “place to watch from.” They were drawing from traditions for protecting and watching against enemies, building a wooden house which will serve as a hub of ceremony, gatherings and resistance over the coming months.

The march and rally were all over the news. It’s been hailed as the largest ever mobilization against Kinder Morgan to date. But that wasn’t the only thing making this particular rally significant. The whole event was led and organized by Indigenous people. Every single speaker was Indigenous, whether from the Coast Salish nations on whose land we gathered, or from as far off as the Innu of northern Quebec.

As Christians, we have been coming to reckon with our complicity in the colonial legacy of Canada. Through the Truth and Reconciliation Commission, we’ve learned about the role we played in “killing the Indian in the child.” We’ve heard the agonizing stories of abuse and neglect, of religion gone wrong. They’re heart-breaking, and I am encouraged and inspired by the growing awareness throughout the church that we need to confess, repent and seek to address the harms we have committed.

But as Stő:lo author and poet Lee Maracle states so eloquently in the recent documentary Colonization Road, we are being deceived if we think that reconciliation “is us forgiving them. Well, I would forgive anybody for standing on my feet if they f***ing got off – do you know what I mean? – and stop doing it.”

If we as Christians want to be serious about reconciliation, then we have to ask: where is harm continuing to happen? Where is colonial power still standing on Indigenous feet? And since silence is complicity, what will we as the church actually do about that harm?

Which is why I said that this Indigenous-led pipeline resistance matters. 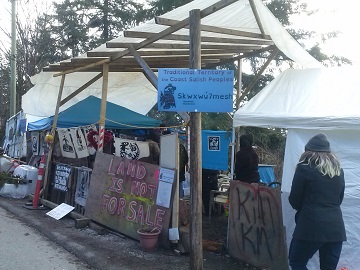 This is Camp Cloud, where people have been keeping on eye on Kinder Morgan’s activities at the tank farm (not the new wooden house mentioned in this comment).

There are any number of important reasons to oppose the Kinder Morgan expansion: the danger of increased tanker traffic in Burrard Inlet, the structural risks inherent in building a pipeline through a mountain, the continued entrenchment of a fossil fuel economy on a planet experiencing catastrophic climate change.

But a fundamental reason for Christians to speak up and stand behind the Tsleil-Waututh and other Indigenous peoples defending their land is the dire importance of taking responsibility for our own history.

Reconciliation won’t just happen; it takes work. It will emerge from the ties of solidarity that are formed as we humbly come alongside our Indigenous neighbours in their struggles to preserve the past, live well in the present, and secure a healthy future. So when Indigenous people are saying “No” to that which would compromise the livelihood of their people, their land, and their water, we need to pay attention. And we need to add our voices, our prayers, our money, our bodies, our privilege to their cause.

So please, as Kinder Morgan attempts to push through this pipeline without Indigenous consent, don’t just stand back. Get involved. Learn more. Make a phone call. Tell a friend. Find out whether your bank supports this project. Support those who risk arrest in opposition to unjust laws. Put your body in the way. Embody your prayers.

Moments like these test what we really believe. If reconciliation is in fact what we’re seeking, then it’s time to move our feet.

Jason Wood is one of the founders of Earthkeepers. For more information on the Kinder Morgan pipeline, the issues at stake and why this matters to Christians, check out this backgrounder put together by Earthkeepers.
Share this story