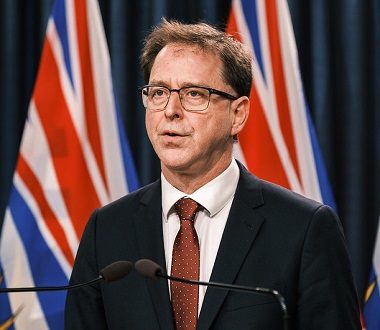 While Health Minister Adrian Dix is protecting seniors from COVID-19 he is also de-funding and evicting a palliative care facility which won’t allow its residents to be killed onsite. BC Government photo

You might think the middle of a global pandemic is less than an ideal time to disrupt the operations of a hospice where palliative care patients receive comfort as they approach death.

If so, you would not share the apparent thinking of the BC government or its local Fraser Health Authority, which as of today has forced layoffs of staff at the Irene Thomas Hospice in suburban Vancouver. The dismissals are part of the eviction of the Delta Hospice Society that oversees the facility.

In a conversation January 7, DHS board president Angelina Ireland confirmed for me that the pink slips were to be given out this morning because the society refuses to administer Medical Assistance in Dying (MAiD) on its premises.

As of February 24, the DHS will have to relinquish the palliative care centre that it raised $9 million a decade ago to construct on Fraser Health Authority land. Its 35-year lease on the property will be nullified, and its other assets expropriated, Ireland says.

She is adamant the takeover has nothing to do with the hospice society wanting to prolong the debate over whether MAiD should or should not be legal in Canada. It accepts the 2016 change to the Criminal Code that legalized the administration of toxic injections by health care professionals intent on ending the lives of patients.

But DHS’ own legally-registered constitution bars it from administering MAiD in the 10-bed Irene Thomas centre. And nothing in the law requires a change to that constitution because nothing obliges the provision of MAiD anywhere, anytime for anyone who requests it.

As Ireland points out, MAiD is readily available for all who seek it at a hospital barely 100 yards from the Irene Thomas Hospice. The centre has also accommodated MAiD-seeking patients by transferring them home or to the hospital. Of the approximately 1,000 palliative patients who’ve been cared for at the facility over the past decade, “three or four” have asked to be administered MAiD, she says.

“This is not a debate about MAiD,” Ireland insists. “This is about the BC government destroying a sanctuary for dying patients who want the choice to stay in a facility where MAiD is not offered. They now find their rights to equal choice being revoked. They are being disenfranchised by the very system they pay for.”

At the very least, it seems to be about an ideology flourishing within governmental circles (provincial and federal) as well as in the minds of many MAiD proponents that giving fatal substances to the dying must be established as an always and everywhere practice in Canada. We have universal health care. We now need universally directed death.

Certainly, following the trail of tears that has led to the Delta Hospice Society’s eviction gives credence to that suspicion. The society was founded 30 years ago to provide end-of-life care, and since that time has been hailed as an exemplary organization for its adherence to palliative principles.

But in 2017, following the federal legislative change nine months earlier, an edict went out from the BC government ordering all palliative and hospice centres excepting those that are faith-based, to provide MAiD.

Pushback was substantial. In the case of DHS, it met with officials from the local Fraser Health Authority and explained its constitutional predicament: its bylaws banned MAiD and to adhere to the government order would put it in violation of its standing under the provincial Society’s Act. The issue seems to have been quietly moved to the backburner by a wise and deft health bureaucrat.

That state of equilibrium-preserving inaction prevailed until 2019 when agitation by local MAiD activists coincided with a change in the bureaucracy. The result was a comply-or-else order, which DHS countered by offering to forego half its publicly funded operating capital – $750,000 – in order to be considered a private palliative facility. Doing so, it believed, would relieve it of the purported obligation to provide MAiD.

The offer did not even get the courtesy of a reply. Instead, DHS was served with a one-year notice of eviction for allegedly having breached its service contract with the local health authority. Months of court action followed until, immediately before Christmas, the eviction notice was reinforced with an order that the society vacate its building and cease overseeing the Irene Thomas Centre by the end of February.

Today, no one seems to know exactly what will happen to those being laid off. There is talk of an orderly transition to a facility where MAiD will be on tap 24/7. We have, of course, learned a great deal from the COVID pandemic about government and bureaucratic understanding of orderly transition. Apparently, the employees will just have to trust.

And in the midst of that pandemic, political, bureaucratic and activist advocates of MAiD ubiquity will have forced a small suburban palliative care centre to bend to their will. Even as COVID death rates soar, the dream of having a sanctuary for authentic palliation will have died.

You might think in Canada that would be enough. Think again.

Peter Stockland is Senior Writer with Cardus, and Editor of Convivium.

Convivium is “an online space that brings together citizens of differing convictions and religious confessions to contend for the role of faith in our common life.” It is published by Cardus – a leading think tank and registered charity.

This column is re-posted by permission.

4 comments for “MAiD in BC: ‘government destroying a sanctuary for dying patients’”