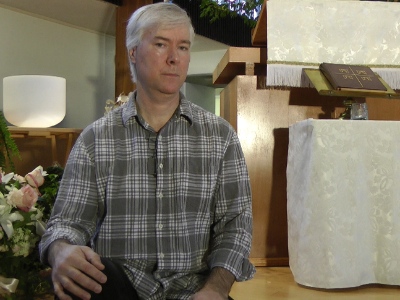 Mikhail Lennikov has lived in sanctuary at First Lutheran Church for over five years.

Mikhail Lennikov has lived in First Lutheran Church (at 42nd and Wales in East Vancouver) for more than five years. While his hosts would like to see him go free, they have also grappled with the significance of sanctuary in our culture.

The church will host Sanctuary: Myths, Movements, Momentum this Friday (November 28). Their purpose is to provide “an educational public forum to discuss the legal and theological context and framework for sanctuary, and to hear the personal stories from the individuals living in sanctuary and from churches currently partaking in the sanctuary movement in the Greater Vancouver area.”

The forum will be broadcast live for those unable to attend.

Following is an open letter from pastor Lori-Anne Boutin-Crawford and Lanny Harris of First Lutheran Church.

To all friends and supporters of Mikhail, the Lennikov family and First Lutheran Church,

Over five years ago, Mikhail Lennikov was granted sanctuary at First Lutheran Church in Vancouver. This was a desperate act to remain united with his family and to avoid serious risk to his safety upon removal to Russia. This was an act of last resort to remain within Canada, in hope that his order of deportation be reversed.

Historically, seeking sanctuary in Canada occurs when immigration applicants or refugee claimants are trying to avoid serious harm to themselves and to their families due to the Department of Immigration’s failure to regard and treat them in a fair and just manner, sometimes because of an error. 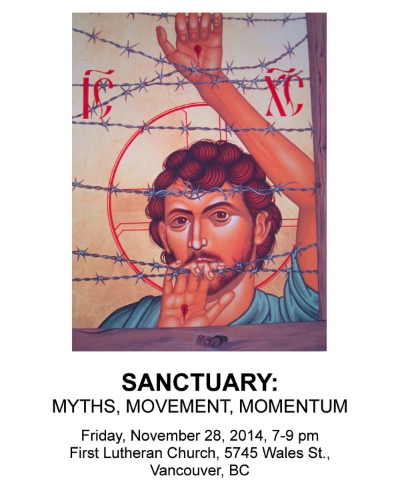 In 2006, the Immigration and Refugee Board decided that, as a former employee of the KGB, the Soviet Security Service, Mikhail Lennikov was inadmissible to Canada. Although Citizenship and Immigration had approved in principle that Mikhail’s wife Irina and his son Dmitri could stay in Canada as permanent residents, Mikhail’s application was refused and he was issued a deportation order after living in Canada for 12 years. Unfortunately, Mikhail’s efforts to prove this decision wrong and his plea at various levels of the judiciary and government to stay in Canada with his family have been unsuccessful.

Despite the fact that the decision-makers may believe the Lennikovs have been subjected to a fair process and in full compliance with Canadian law, we, the congregation of First Lutheran, dare to disagree. Our supporters also agree and stand with us, seeking justice.

Since 1999, the conclusions drawn by Citizenship and Immigration of Canada (CIC) and Canadian Border Services Agency (CBSA) have been puzzling, and there is evidence of inconsistency and contradiction in their official documents.

For example, in September 2008, CIC decided that Irina and Dmitri would face no risk, harm or undue hardship if deported to Russia, and were scheduled for removal from Canada along with Mikhail. However, merely four months later, CIC approved Irina and Dmitri, in principle, as permanent residents of Canada on humanitarian and compassionate considerations because of the potential risk and undue hardship they would face if deported to Russia.

We strongly believe that Mikhail’s case should have been decided in the same vein, as his circumstances are even more dire than those of his wife and son. Truly, we fear what awaits Mikhail if he has to return to Russia, and it is our hope that our legal system hears our plea.

From the time Mikhail entered sanctuary at First Lutheran in June 2009, we have been seeking a positive resolution through legal and political means. In 2012, our legal counsel became prominent immigration lawyer Hadayt Nazami, based in Toronto.

He has filed four applications with CIC and the Ministry of Public Safety built around evidence that did not exist before and has never been submitted to the decision makers, addressing Mikhail’s inadmissibility.

The legal arguments for Mikhail’s case have been especially strengthened by a recent decision of the Supreme Court of Canada, in particular refraining from labeling people as criminals by simple association. This is powerful evidence demonstrating that Mikhail should not be considered inadmissible simply due to his association with the KGB, as he is not a criminal, and has never committed any crimes against Canada.

As of this writing, all these applications are still being reviewed. Our lawyer, Hadayt Nazami, believes that the changes in our evidence and the changes in immigration law since Mikhail’s last proceedings are in our favour. Particularly with the recent change in immigration law – with the clause changing for inadmissibility to include only acts done against Canada – Mikhail s case is now stronger than ever.

Our lawyer will uncompromisingly fight for Mikhail, as he believes there is ample objective evidence to establish that Mikhail is not inadmissible to Canada, that he is at risk if he is removed to Russia and that his family will be substantially harmed if they are separated. Hadayt is determined and hopeful about Mikhail’s case, and he will do everything he can do to ensure that justice prevails.

For the last five years, we have been closely working with the federal and provincial politicians who have pledged their support in Mikhail’s case; unfortunately, our efforts have not brought a positive resolution thus far.

This past year, we sought to engage directly with our federal politicians in hope that we could have a meaningful dialogue regarding Mikhail’s case. Last November, we wrote a letter to Wei Young, the Conservative Member of Parliament for Vancouver-South, asking her to advocate Mikhail’s case to the Minister of Immigration Chris Alexander and the Minister of Public Safety Steven Blaney.

We never received a reply from Wei Young. We copied this letter to both ministers, who eventually generated responses reflecting the current legal decisions regarding Mikhail’s case. Our National Bishop, Rev. Susan Johnson, contacted one of the principal decision-makers with a request for a meeting, but this too was denied. Unfortunately, our efforts to seek justice have been dismissed by our federal politicians.

Despite our attempts to engage in the democratic processes of our country, we have come to understand that our best hope lies with our lawyer, Hadayt Nazami, and with his unfaltering fight for justice.

Over five years have passed since First Lutheran Church opened its doors to provide a safe place for Mikhail, Irina and Dmitri. It has not been an easy time, but it has been a time filled with hope, faith and determination. The resolve of our pastor, council and congregation of First Lutheran, as well our supporters, remains as strong as it was in the beginning of our journey.

Despite the fact that  the sanctuary story  disappeared from the media several years ago, it has not been forgotten. You have been continuing to encourage and give us comfort, with your unwavering moral, emotional and generous financial support, sustaining and upholding us in our call for compassion and for social justice. We can’t thank you enough! We have no doubt that together, with your prayers, encouragement and support, we will see wrongs made right and Mikhail’s freedom restored.

On behalf of First Lutheran Church