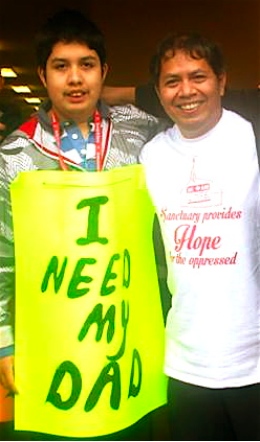 José Ivan, 16, who has been diagnosed with autism, with his father José Figueroa.

“I never dreamed it would come to this – if we had only used common sense José wouldn’t have had to seek sanctuary.” So says Karl Keller, the long-time pastor of Walnut Grove Lutheran Church, referring to his parishioner José Figueroa, who has taken sanctuary in his church.

José is under threat of deportation to his native El Salvador because of his youthful participation in an allegedly terrorist political movement. Immigration Canadian has denied him permanent residency status, claiming that the FMLN (Farabundo Marti National Liberation Front), a leftist political party for which he was a student recruiter, was a terrorist organization.

José took sanctuary at Walnut Grove earlier this month, after the Canadian Border Services Agency issued an arrest warrant for him.

Karl is glad to have him, though he hopes it won’t last too long. “Why would I not support José? I have known him since 1997, when he arrived in Canada . . . he has a very high ‘credit rating’ as a person.” 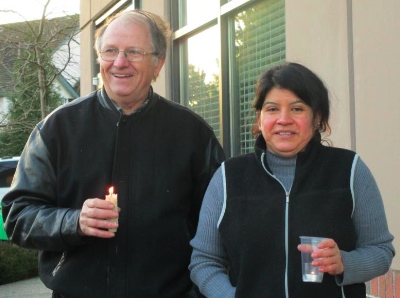 Karl and the congregation helped José and his wife Ivania get established after they came to Canada legally 16 years ago as refugee claimants. Since then, they have remained in Langley, working, buying a house, raising their three children and attending Walnut Grove Lutheran Church.

Supporters lined the block with their banners and Salvadoran flags in a bid to increase pubic awareness of an injustice which would lead to the forced removal of a father from his wife and three children.

At the rally, Karl explained the legal aspect of José’s situation and ended with these words: “It is not rocket science; I get it, the deportation order must be reversed if justice is to prevail for José and all those in his situation.”

Karl Keller, 75, might seem an odd champion for José’s cause. A theologically conservative Lutheran, he travelled the world as director of the Lutheran Evangelistic Movement before settling down to serve at Walnut Grove. 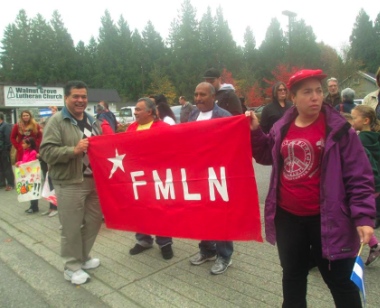 There has been a lot of support for José in Langley and across the country. More than 150 people came to a rally at Walnut Grove October 19.

In a phone conversation following the rally, he simply asked, “If you were a high school grad at that time, who would you have joined?” Not the government and its death squads, but the FMLN.

“The FMLN were not terrorists; it was a civil war [from 1980 – 1992]. The El Salvador government called anyone who didn’t agree with them a communist.” One man he spoke with recently remembered seeing a billboard which read: “Support the government, kill a priest.”

He acknowledges that some elements of the FMLN employed violent tactics, but points out that the UN Truth Commission for El Salvador found the Salvadoran armed forces and death squads bore responsibility for the great bulk of the murders and violence during the civil war. He said the commission found them responsible for 85 percent of the cases reported to them, while the FMLN were responsible for just 5 percent.

In any case, he adds, “José  was never a combatant. His job was to make the FMLN strong enough to make the government sign a peace agreement – which they did in 1992.”

And he points out that “Today, the FMLN is the elected government.” Canada’s Minister of State for Foreign Affairs (Americas) Peter Kent visited El Salvador in 2009 for President Mauricio Funes’ inauguration.

In a recent report CTV News said it “has approached Canadian Border Services Agency about Figueroa’s case a number of times, but it has yet to explain why FMLN is considered a terrorist group.”

José and his family clearly have lots of support in the community. Many people spoke up for him at the rally, including two Langley city councillors and teachers of the children. Many bring him food in his church sanctuary.

José’s supporters ask that people visit the We Are Jose website to sign the petition and to keep up with  the campaign. There will be a rally at the Federal Court of Appeal (701 West Georgia Street) next Tuesday, October 29.

← Trinity Western president: ‘Some thoughts on our law school proposal’
Oct 21 – 27: Sculpture at Lookout, Chapel at JO, Communion at PT . . . →