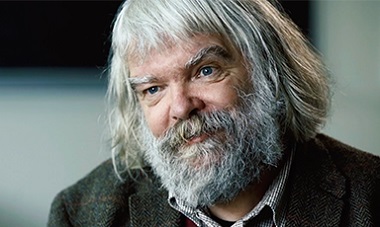 Malcolm Guite will deliver the Laing Lectures at Regent College April 9 – 11. His first talk will be on ‘Christ & the Poetic Imagination.’

Over three evenings next week (April 9 – 11), he will be the Laing Lecturer, delivering a series titled Imagining the Kingdom.

And from July 29 – August 2, he will be back to teach a one-week course titled Arrows of Desire: A Theology of Love and Longing.

In anticipation of these visits, Regent College staff asked him to provide some expert guidance through the turbulent waters of modern poetry. Here he recommends five great poetic works from the past five decades.

1. I’ll start with Geoffrey Hill’s slim volume Tenebrae. I read this when it came out and still have the hardback edition that I bought then. Hill has the reputation of being a difficult poet, but the poems in this book are all lucid and beautiful. This is the book that taught me that it was still possible to write sonnets without falling into pastiche or archaism. It was Hill’s sonnet sequence “Lachrymae,” addressed to Christ, in whom he did not yet believe, that helped to make a believer out of me.

2. Next up is Seamus Heaney. All his poetry is vital to me but if I had to pick one volume from the last 50 years it would be 1991’s Seeing Things. All the poetry in that book does indeed help you to see things, to see more deeply into the things in this world, to see hints and glints of things eternal through things temporal and to see things in a new and imaginatively illuminated perspective.

3. Still on this side of the Atlantic, I would strongly recommend the poetry of Gwyneth Lewis. She has been national poet of Wales and writes in both Welsh and English and is a poet with a gift for discerning spiritual truth in and through material science. Her book Zero Gravity: A Space Requiem exemplifies that, making poetry out of her cousin’s expedition into space to repair the Hubble Space Telescope.

4. Happily my trips to Canada and the States have exposed me to some great North American poetry, and I would commend in particular two contemporary poets with very contrasting styles. First up is Scott Cairns, whose wry laconic style belies an intense inward mystical glow. I commend 2009’s Idiot Psalms for its terse, sly, deadpan humour and the way Cairns brings the wisdom of the Desert Fathers into the urbanity of the every day.

5. Finally I have been hugely encouraged both personally and poetically by the work of Luci Shaw. It’s hard to choose between her books, filled as they all are with her wonderful eye for detail, her unobtrusive shaping of emblems, and her sheer delight in the goodness of God’s creation. I’m going to give 2010’s Harvesting Fog a special mention, not least because it contains Kenosis, a near perfect poem, which I will be opening out in the first of my Laing Lectures.

This article is re-posted from the Regent College site by permission.

Here is how Regent describes the Laing Lectures:

From the moment he proclaims the kingdom of God, Jesus appeals to our imaginations. He makes this appeal through parable, through paradox, and through the enigmatic and beautiful signs he gave in his miracles. In the gift of faith, and in Christ himself, we glimpse more than we can yet understand: Our imagination apprehends more than our reason comprehends.

This is not to say that the gospel is in any way “imaginary” in the dismissive sense of “unreal” or “untrue.” On the contrary, what Christ speaks is so real and true that we need every faculty, including imagination, to apprehend it. In an age of linear, one-level readings, we need to recover confidence in the baptised imagination as a truth-bearing faculty.

All lectures will take place from 7:30 to 9:30 pm in the Regent College Chapel. The evenings are free of charge and entry is first-come, first-served up to capacity.