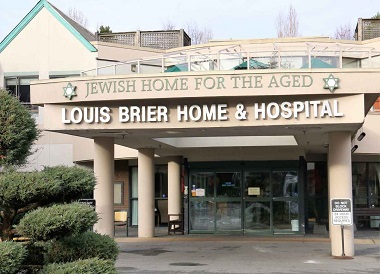 The Louis Brier Nursing Home does not allow assisted dying on the premises.

Last spring, Archbishop Michael Miller of the Roman Catholic Archdiocese of Vancouver lamented the passage of Bill C-14 by the federal government. He said:

Unfortunately, the “medical assistance in dying” [MAiD] legislation introduced in Parliament today sets Canada on the tragic course of offering death as the solution to pain and suffering.

He also predicted problems to come for faith-based providers of health care:

Recent developments bear out the perspicacity of his words.

On January 31, the Ontario Divisional Court released its decision in Christian Medical and Dental Society v. College of Physicians and Surgeons of Ontario. Paola Loriggio wrote in The Star:

Ontario doctors who have a moral or religious objection to treatments such as assisted dying, contraception or abortions must refer patients to another doctor who can provide the service, after a court found it is necessary to guarantee that vulnerable patients can access the care they need.

Closer to home, an Orthodox Jewish nursing home in Vancouver has filed a complaint regarding a MAiD doctor, accusing her of “sneaking in and killing someone,” according to a January 5 Vancouver Sun article. And a February 6 story in the Sun was titled ‘Delta hospice rebels against Fraser Health’s mandate to provide medical assistance in dying.’

Those three articles were fairly even-handed. Unfortunately, that is not true of a recent series offered by our publicly-funded broadcaster. 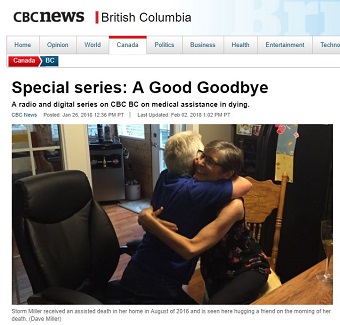 CBC’s Early Edition recently presented a week-long series promoting MAiD – including several critiques of the fact that it is not available in all hospitals. A Good Goodbye ran daily from January 29 – February 2.

The first interview was with Dr. Stefanie Green, president and co-founder of the Canadian Association of MAiD Assessors and Providers (CAMAP), and a MAiD provider on Vancouver Island, the region with the highest rate of assisted deaths in the country. (In BC the percentage of people who died with medical assistance in the first six months of 2016 was more than double that of any other province.)

Speaking with host Stephen Quinn, Green described the 18 months since assisted dying became legal in Canada as “phenomenal” and extraordinary.”

Asked about the people who come to her seeking assisted death, she said:

The people coming to her seeking assisted death: “These are very strong-willed people, very determined people, people who have been often fighting disease or illness for a long time – usually, though not always. And they really feel strongly that they want to have a sense of control over how they die. They’ve always lived a life that has been under their own control and they want to have a say at the end.

An article by Jean Paetkau (who produced the series) about the Stefanie Green interview added this point:

Even though BC has the highest rate of MAiD in the country, there are concerns about patients being able to access the procedure in faith-based institutions.

The Denominational Health Association (DHA) includes 44 health-care facilities in BC, and their members do not allow MAiD to be performed on their premises. Most facilities do, however, support patients being transferred to another facility to have an assisted death.

Recently Dr. Ellen Wiebe provided MAiD to 83 year-old Barry Hyman who lived in The Louis Brier Nursing Home in Vancouver. The Jewish facility does not allow assisted dying on the premises.

“That care home is a home. It was the only home for Barry Hyman and he chose to die in his home and he had the right to make that choice,” Wiebe said.

The nursing home has now issued a complaint against Wiebe with the B.C. College of Physicians and Surgeons.

The theme recurred throughout the series (though representatives of faith-based institutions were conspicuous by their absence). 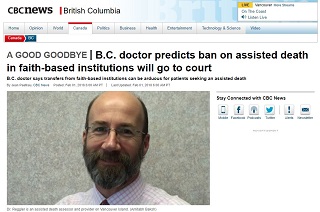 The February 1 interview was with Dr. Jonathan Reggler, another “assessor and provider of medical assistance in dying (MAiD) on Vancouver Island.” He said:

We’re talking about the owner of the bricks and mortar, in this case the Bishop of Victoria, and the board of the hospital saying that an entire community cannot access a legal procedure in that hospital. It’s an appalling situation.

Asked whether he had any sympathy for the conscience of the medical practitioners or medical administrators for the Catholic church, Reggler said:

I have complete sympathy with individual doctors and nurses who do not wish, and cannot because of their faith, take part in medical assistance in dying. . . .

[The health authority] aren’t actually taking part in a procedure. It is simply allowing something to take place in a publicly funded institution.

Reggler was able to respond to a clip from Christopher De Bono of Providence Health Care, but no one from faith-based hospitals was interviewed.

Gregor Craigie: We heard about a few controversies in this series as well, the most significant being the access to assisted death in faith-based institutions. What did you take away from that issue?

Janet Paetkau: We heard from Providence Health that offering assisted death contravenes their ethics, and we heard from MAiD provider Dr. Reggler that he thinks this issue is going to court. The issue has been in the news again this week, in Ontario, after a court ruled that doctors who object to assisted dying on moral or religious grounds must provide a referral for patients. So Gregor, I think the attention, the debate around this issue, it’s only going to increase.

Health care in BC, some background 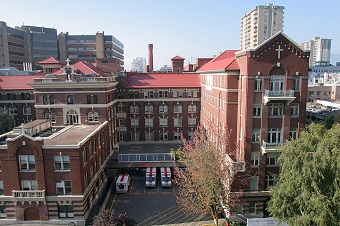 St. Paul’s Hospital is part of Providence Health Care – and the strong legacy of faith-based health care in BC.

If the CBC isn’t interested in providing even-handed coverage, one will have to look elsewhere for the faith-based perspective. A good start would be Important history behind our health care (January 12) by Paul Schratz, who is editor of The B.C. Catholic and director of communications for the Archdiocese.

The illicit death at a Vancouver Jewish care home, prompting a statement last week from Archbishop Miller, raises important issues of religious freedom, but also the nature of health care in Canada.

A little history sheds some helpful light on both.

Back in 1858, the Sisters of Saint Ann arrived in B.C. from Quebec, ready to bring their teaching ministry to the new colony of Victoria.

No sooner had they arrived than they saw an equally urgent need for health care. Working from a small log cabin near Beacon Hill Park, they began visiting and carrying for the poor, elderly, and sick and dying in their homes. They would even prepare the deceased for burial.

The sisters went on to establish St. Joseph’s Hospital, funded entirely by donations, and even launched a rudimentary health-insurance program that cost $1 a month and was open to all faiths and races.

That’s just one small part of one particular story of Catholic health care in Canada. There are countless others, because the history of Catholic hospitals is in many ways the history of health care in Canada. At one point there were hundreds of Catholic hospitals across the country – 17 of them in B.C. – started by religious congregations who dedicated their lives – literally – to caring for the sick and dying. Scores of them remain today.

Catholics don’t have a monopoly on compassion in health care. In B.C. there are more than 40 health-care facilities operated by 12 different religious denominations – Catholic, Baptist, Salvation Army, Jewish, and more.