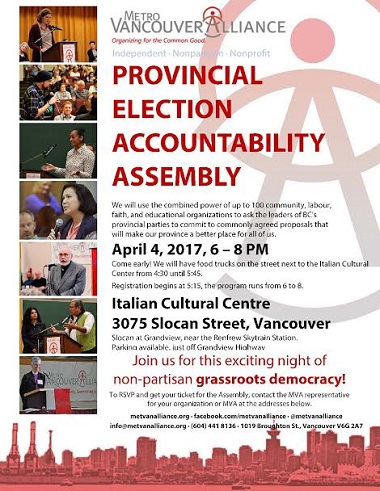 The MVA has invited the three provincial party leaders to address its delegates. Thus far, John Horgan, NDP, and Andrew Weaver, Green Party, have agreed; the MVA is still waiting to hear from Premier Christy Clark, leader of the BC Liberals.

Metro Vancouver Alliance is a broad-based alliance of 57 civil society institutions which work effectively, together, for the common good. Member and sponsoring organizations – faith, labour, community and educational groups (see below) – represent 200,000 people in Metropolitan Vancouver and more than 700,000 people across the province.

Following is the MVA’s program for the evening, setting out what they want our provincial political leaders to agree to:

At our Municipal Election Accountability Assembly October 19, 2014, we received commitments from local politicians on our civic agenda. [On April 4] we will be asking the provincial party leaders to support our efforts on Economic Justice, Affordable Housing, Accessible Transit and a Strong Foundation for Healthcare at the provincial level.

1. The province we want: A fair, equal and poverty-free place, with economic justice for all

BC has the second highest poverty rate in the country and is the only province without a plan to reduce poverty. A comprehensive poverty reduction plan will address social assistance rates, low wages, child care, education and health care.

Persons receiving provincial disability assistance currently have their Canada Pension Plan Disability benefits clawed back by the provincial government, despite having contributed to CPP in their working years. This traps people in poverty, unable to support their basic needs.

We ask the candidates to:

Failure to build new affordable housing units and repair existing housing stock over the past 30 years has led to a crisis in housing affordability. While attention has focused on the spectacular increases in real estate prices, there is also a serious crisis in the rental housing market. Rising land values have led to an epidemic of evictions as landlords have taken advantage of loopholes in the Residential Tenancy Act.

We are asking candidates to

3. Accessible transit for all

The population of people over 70 years old will continue to increase rapidly in BC over the next decade. There is already a chronic shortage of HandyDART service resulting in social isolation, missed medical appointments and other negative effects. And in 2014 the Government of British Columbia committed to become “the most progressive jurisdiction in Canada for people with disabilities – where disabilities are no barrier to living full lives.”

We are asking candidates to:

4. A strong foundation for health care

Primary health care (PHC) is the foundation of Canada’s health care system, providing access to both health and social services. But services like physiotherapy, counselling, home support and home care are becoming harder to access because patients are confronting a growing number of barriers, including financial and geographic. We support the commitment of the Ministry of Health to increase access to coordinated primary, community and social care services so that patients can obtain the right service from the right provider at the right time.

We are asking candidates to:

If your organization isn’t affiliated yet – for example a church/faith group, a union, a community group like a resident’s association, advocacy group, or non-profit or an educational institution – get in touch and one of our organizers can let you know how your group can join MVA.

These are the 57 civil society institutions which have allied themselves with MVA: