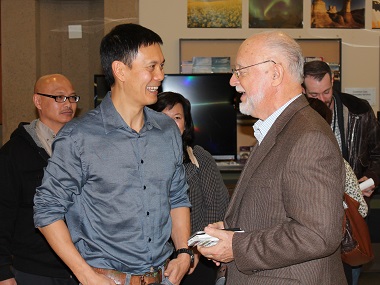 Rick Jocson (centre) and his brother Eddie (left) were rescued from Laos 39 years ago by Reg Reimer.

Reg and Donna Reimer have experienced a whirlwind of media attention over the past week as they took part in an emotional meeting with a family Reg helped to reunite 39 years ago.

Following is part of a November 6 CBC News story, followed by some moving reflections by Reg himself.

It was 1977 and the communists had taken over large swaths of southeast Asia. Refugees were crammed into camps and families torn apart.

Amidst this backdrop, two young boys were smuggled across the Mekong River to Thailand from Laos, the threat of trigger-happy soldiers on either bank a constant.

Now, 40 years later in Calgary, those once-small boys have reunited with the BC missionaries who helped them slip through borders to safety.

“The reaction of Kim, the boys’ mom, today, again was quite overwhelming,” Reg Reimer told CBC News on Saturday.

“She can’t get over thanking us.”

In 1977, Reimer and his wife Donna, of Abbotsford, BC, had a chance meeting with a mother at a church event in Regina, where Reimer was teaching at a seminary.

“We were assigned to go back to Thailand to work with refugees, and we met Kim and her husband at a church event,” Reimer said.

“When they found out we were going to Thailand, Kim ordered me to get her boys. At that point I didn’t know what I was getting into.”

In the fallout from the Vietnam War . . . the parents were evacuated to Guam, the U.S. and then Canada, but the boys were left with a grandmother in Laos.

It took two attempts for the Reimers to get the boys out of Laos, because initially the grandmother would not release them to strangers.

“Kim sent us a little photograph of herself, I can remember. A small little photo, she was wearing a red dress. She wrote on the back of the photo, ‘Mom, give the kids to whoever gives you this photo,'” Reimer recalls.

The grandmother finally agreed and the boys and the Reimers, with the help of other missionaries, began their long journey to Canada. 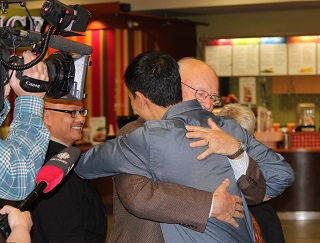 Rick Jocson managed to get in touch with Reg Reimer this year.

Following are some of Reg Reimer’s reflections on the reunion:

The last 54 hours have been a whirlwind of emotion and profound experiences as we were reconnected with two boys we rescued from communist Laos and reunited with their parents 39 years ago. The boys, Rick and Eddie Jocson, were three and seven then. They are 42 and 46 now!

A series of highly improbable events led to the younger of the two tracking us down us in mid-September. This past weekend we flew to Calgary for our reunion. And what a reunion it was!

Several media outlets covered the meeting. Donna, who has a succinct way about her, explains the story’s popularity, “People are just hungry for some good news!”

Meeting us at the airport were mom (Kim) and the boys – Rick and Eddie – with a sister and a brother with all their spouses and several small children. Hard hugs and tears and joy all around! Our deep bonding with the family began right then and there. Kim hugged Donna and me, not wanting to let us go. 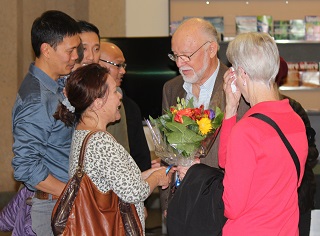 She said, “You tell me thank you one time enough, but no, I want to do over and over. You save my family!” And other words too sacred to repeat.

Our bonding with the family was indeed a sacred experience. It is difficult to write about. One by one they approached us throughout the weekend, including in-laws, looked us in the eye and thanked us, tracing their own happy and well-off situation in Canada somehow to our act of rescuing the boys and reuniting them, thereby setting their lives and futures on a new trajectory.

We were humbled, embarrassed, but inwardly full of inexpressible joy at the gratitude we received for the next two days. The first night the whole clan (22 or so) came bringing scads of Vietnamese dishes for a feast.

The clan includes not only the nuclear Jocson family of the boys and their siblings, but also three aunts, an uncle, some spouses and the boys’ 95 year old, sharp-as-a-tack grandma whom the Jocsons had all sponsored in the years after I brought the small boys to Canada.

I learned from her the trauma she and grandpa experienced after giving up the boys to two strange women (our smugglers) and not learning the boys were safe until weeks later. Grandpa, who did not learn that grandma had sent the boys away until after it was done, sat for hours looking at their photo, worrying deeply.

Meeting with grandma and conversing in Vietnamese clearly closed a circle for her. She had described me as “The man who stole her grandsons.”

Rick choreographed the highlight of the evening. Just before CBC’s The National came on, he had us all seated in front of the big-screen TV. The piece began with a few explanatory words and then the clip of the original family reunification 39 years ago.

Tears flowed freely as the broadcast segued to shots of our airport reunion the day before. Then me with a short summary describing the whole thing as a “missionary metaphor” – bringing the lost and separated back to the parents and family.

That the editors selected this out of a long interview was no accident. One of our friends watching it in another province said, kindly, those words were “like apples of gold on a plate of silver.” Thank you Lord!

The extended Jocson clan know how to do family in a way scarcely experienced in our culture any more. It was a wonderful harmonious bedlam! And Donna and I were just so naturally enfolded into this joy and cacophony. It was the best reward they could have given to us! We became grandma and grandpa to the kids and uncle Reg and aunt Donna to many!

The adults began questioning us about our life and work. As if I need coaxing to tell stories. They sat – mouths wide open at hearing our Vietnam experiences. They could not imagine voluntarily subjecting ourselves to such risks. I explained it was a call of God.

Donna said later, as we prepared for bed, “Reg, I am tired of crying!” Then she started crying again, saying the second most moving part of the whole experience for her was to meet people who were genuinely interested in what we had done with our lives in Vietnam and elsewhere. They really wanted to know! This was such a contrast to much of our experience, even with churches and family.

The clan is a near perfect example of immigrants taking advantage of opportunities. The first generation who came as adults of course did menial work. “I came Saturday,” said one aunt, “I start work hotel maid on Tuesday.”

A number of those who came as children or were born shortly after their parents arrival are already highly accomplished and prosperous professionals, And realizing their huge blessings they are turning their attention to search also for significance and meaning in life.

When I enthuse about all this, Donna reminds me, “Reg, we were just doing our job” Well, yes, but who could have imagined the rewards! 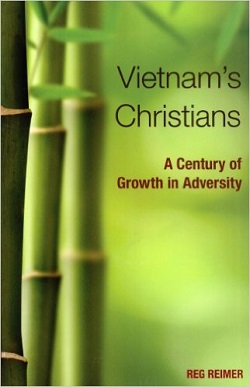 Reg Reimer went to Vietnam as a missionary with his wife Donna and their two young children in 1966. He completed a master’s degree at Fuller Seminary’s School of World Mission during a leave from Vietnam in 1972. The Reimers returned to serve in that war-torn country until the fall of Vietnam to communism in 1975.

Though they were forced to leave, Reg has kept in close contact with the churches and culture of Vietnam and is a champion of religious liberty in Southeast Asia. He has completed more than 100 missions to Vietnam since his first post-communist trip in 1980. In 2011 he published Vietnam’s Christians: A Century of Growth in Adversity.

Reg led World Relief Canada for a decade and has worked with both the Evangelical Fellowship of Canada (EFC) and the World Evangelical Alliance (WEA). He served as co-editor of a major work sponsored by the WEA’s Mission Commission in 2012: Sorrow & Blood: Christian Mission in Contexts of Suffering, Persecution and Martyrdom.