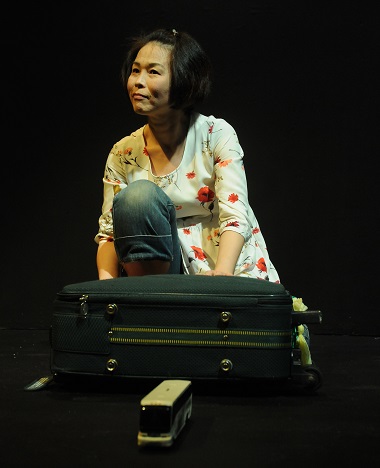 Maki Yi has taken a long journey from her native South Korea to Vancouver; ‘Suitcase Stories’ offer a dramatic and poignant account of her experiences in Canada. Photo by Damon Calderwood.

Margaret Ritchie and Soran Nakai attended Suitcase Stories by Maki Yi together on opening night (October 28). Margaret has written a review, followed by Soran’s interview with the playwright.

Suitcase Stories is a Canadian-Korean woman’s first person account of her decade-long attempt to immigrate to Canada “from a land of slavery to a promised land.” It will resonate particularly with those who know immigrants or would-be immigrants – or are navigating the paperwork hurdles required to welcome refugees.

The stories of lost forms and unbelievable time lapses point to a need for more government servants. She doesn’t say that; Yi turns her trials into a winsomely revealing travelogue of self-discovery. She finds racism (within), and fights for the chance to be herself.

The whole process was not easy for a woman who grew up in a Confucian society, and wasn’t a particularly gifted student. Feeling “out of sync” in the world she was born into, and fending off unwanted offers of arranged marriage, Yi experiences pain that she tries to dull with alcohol.

Calling out to God in despair, she is healed both of her pain and her alcoholism. Her cheeky animate suitcase wonders why God wouldn’t just change her personality – surely that would have been just as easy.

When Yi first arrives on stage, it is a barren, black set. She has only her suitcase with her.  She pulls from it streamers, a toy greyhound bus, all the props as she needs them, then packs them up again when she doesn’t. Walking into the theatre, I was a trifle let down; I’m used to Pacific Theatre’s masterfully creative set designs.

It wasn’t until ruminating in my seat just after the play, that I realized the chalk writing and drawings Yi had made on the walls and floor as she told her stories had become both a ‘road map’ and a delightful set design.

Her account of arriving at Toronto’s Pearson airport and being afraid of all the non-whites was funny; it is also a reality for Asians travelling to the West.

We are drawn into her awe of the expanses of the forests and prairies of Canada as she travels Greyhound. On her first day in Regina, we identify with both her fear and her shame when she rebuffs a First Nations man who sits on a park bench with her.

We are uncomfortable and pained when she is denied a major part in her theatre program’s final play because “the audience would have to work too hard to understand you.” We are thrilled with her when, unexpectedly, after hope is gone, she is told by an immigration authority in Hong Kong that, yes, Canada needs artists: “Welcome to Canada.”

We don’t often have artists this close to the immigration experience sharing their gifts; they are too busy educating themselves, re-educating, making a living, raising children. I’m grateful that Maki Yi is using her newly won English – and love of theatre – to bring a fresh, honest look at immigration to Canada. 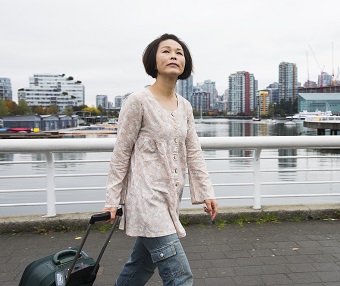 Soran Nakai interviewed Maki Yi a couple of days after opening night. “Like her play,” she says, “Maki is adventurous, honest, uncompromising, humorous and tenacious. In my interview with her, she opened up about the life she left in Korea, her faith journey, falling in love with theatre and Suitcase Stories.”

A very unusual Korean name (Wi-Hyung) often left me feeling alienated from the crowd (she laughs). It’s very difficult to pronounce, even for Koreans. I felt like its tricky enunciation and distinctiveness contributed to my subversive personality. I left behind my name and my often misconstrued identity in Korea. I love my new name, Maki, which means ‘a sincere prayer’ in Japanese.

I always questioned and was unwilling to accept the status quo from the time I was very young. For example, when I was a little girl, I wanted to climb trees just like my older brother. I was reprimanded, just because of my gender.

Then as I grew older, the pressure to accept the mainstream culture in order to belong to different in-crowds and assimilate Confucian values, which emphasized outright obedience to my elders in areas ranging from acceptable social behaviours to marriage, caused severe inner struggle and doubt.

I simply wanted to know my worth as a human, not based on my gender or social status. This attitude was seen as insolence and defiance. I’m sure I am not the only one who struggled with these issues; however, I found no confidant with whom I could share these thoughts.

My church life in Korea was mere social engagement. Church was a place where Confucian values took on a spiritual tangent. Now, I had to deal with this God who was bigger and far more powerful than the elders. I understood this God to be judgmental, distant and partial to those whose life style pleased him. I was terrified. However, obedience for the sake of obedience didn’t come easily to me at all. I felt like a failure and an oddball. I was even convinced that there must be something wrong with me in general – I was maybe even a bad seed.

I left church and became an alcoholic in my early twenties because I seriously thought something was wrong with me. I just did not fit in anywhere. I was very unhappy. I drank to forget my pain but then my body could not manage the heavy drinking either. So, I decided to end my life one night. To make a long story short, I even failed at that.

The only thing I could do was to cry out to God to take my life instead. I felt something blanketing me and heard a clear voice in my heart that said that God accepted me for who I am. I wept for a long time. At the time, it felt unreal and I wasn’t even sure if it really happened. It was only when I realized that my need to drink disappeared just like that that I knew it really did happen.

I also began to accept myself for who I am for the first time in my life because God accepted me. This encounter with God was unlike the message I had heard from the Korean churches I had attended. However, the question came to mind, “what now?”

The rest of the world around me was the same and I still felt lost as to how to navigate life from that place on. The idea of my own exodus was given to me and then, it just so happened that there was a Canadian ESL Education Fair hosted by Canadian Consulate where I learned about an opportunity to learn English in Canada.

Although my first destination was Toronto, I spent most of my early years in Regina. I found a local church whose populace consisted predominantly of aging Caucasians. They meant well but I didn’t find any community there either. They thought theatre was not a proper calling in the eyes of God. Of course I was discouraged and my past hurt from church kept creeping back. But I knew I had to keep going to church no matter what.

It took me four years to find a church and church community in Vancouver. I held on to God alone for a long time but I knew I needed a community. He was my lifeline, but without a community I felt that lifeline getting thinner each day. I thank God for a few individuals who stood in the gap for me in prayer. I learned that my relationship with God could only grow so much without a community of other believers around me. Now, I am at a place where art and I coexist, and people are accepted and celebrated for who they are.

Who is God to me now? He is everything. He takes care of me. He is my provider. He is the owner of my life – my life came from him. My thoughts, my feelings, my body and my spirit – everything belongs to him. He is a great parent to me. I came here with nothing. He became everything I need.

I studied literature in Korea. I loved reading and watching films. However, theatre was never something I considered for myself. During my ESL training at the University of Regina, I wrote an essay on Shakespeare. The instructor saw my interest in plays and suggested that I might consider taking a theatre course.

Despite my hesitation due to the lack of language skills, I decided to give a three-month course a try. After just one class, I fell in love with it. I jumped up and down in my cold dark basement suite and praised God for leading me to this discovery.

It has not been an easy road for me. However, I really could not choose anything else other than theatre. As soon as I step out on stage, all my doubts and fears disappear. 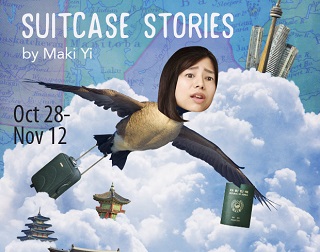 Being an audible minority, it is very challenging to find and land a role in any play. So, with the encouragement of a number of people at Pacific Theatre, I proposed The Lobby Project, which is a series of short 10-minute plays of what is now Suitcase Stories.

I presented the short versions of Suitcase Stories in Pacific Theatre’s lobby before the doors opened for the main performance. Then I was encouraged to put them all together to tell my story in a 90-minute show.

The last thing I do before I come out on the stage is pray, because though Suitcase Stories is an autobiography, it is more God’s story than mine alone. I hope that people who come to see my show will see that it is really about God’s grace and his care in our lives; that he always has a better plan than our own. He works behind the curtain of everyone’s play that is their life.