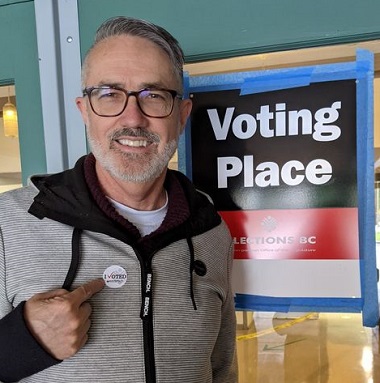 Laurie Throness is no longer a BC Liberal, but he’s still running for re-election. Photo of him voting October 19, from his Facebook page.

There have been no dramatic shifts since I posted ‘BC election: NDP has comfortable lead, two groups encourage careful scrutiny’ two weeks ago.

The BC NDP remain well in front, though the race has tightened a bit, and those groups – the Catholic Church and ARPA Canada – have fleshed out their voting guides.

Probably the most noteworthy issue for Christians is that the BC NDP ramped up its attack on socially conservative Liberal candidates.

The October 20 Angus Reid Institute report showed the NDP’s lead narrowing. Here are a couple or its key findings:

Go here for the full report. 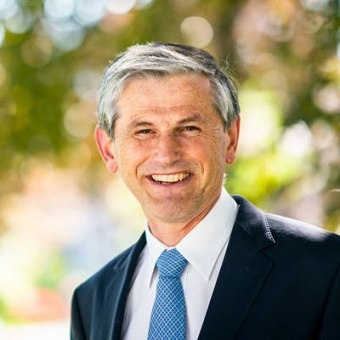 Andrew Wilkinson said in June that the BC Liberals will no longer advertise in The Light Magazine; now he has said there is no place for Laurie Throness in the party.

One of the nastiest skirmishes in the provincial election battle began with high profile NDP candidates such as Spencer Chandra Herbert taking shots at socially conservative (and Christian) Liberal candidates over their views on LGBTQ-related issues (here and here for example).

Liberal leader Andrew Wilkinson kowtowed to that pressure (and presumably pressure from the small-l liberal wing of his own party) October 15, following comments by Laurie Throness (incumbent Liberal candidate for Chilliwack-Kent) about contraception and eugenics.

Wilkinson said “enough is enough” and that it was time for Throness and the party to go their separate ways.

Throness actually resigned, but Wilkinson has since said that his intention was to let him go.

BC NDP vs ARPA

The BC NDP had released a statement October 8 throwing mud on both ARPA Canada and several candidates. The bold print read:

Homophobic and anti-choice group ARPA (Association for Reformed Political Action) is set to campaign in the communities of BC Liberal candidates Laurie Throness, John Martin, Mary Polak and Margaret Kunst immediately before the election.

ARPA’s “Defending Our Christian Legacy of Freedom” tour will stop in Langley on Friday, October 23rd and then in Chilliwack on election day. ARPA’s explicit mission is to influence government on issues like conversion therapy, LGBTQ+ rights and abortion.

The release then listed several links between ARPA and the politicians 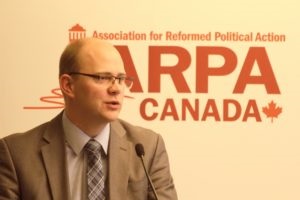 Mark Penninga, executive director of ARPA Canada, wrote a letter to the editor in The Chilliwack Progress October 9, stating that the NDP’s approach is anti-democratic:

Had they done so, they may have been informed by people like my current NDP MLA (and cabinet minister), as well as the new NDP candidate in my riding, that they too have long associated with ARPA, met with its staff, and taken part in ARPA functions, including the coffee social mentioned above and our “God & Government” conference – the same conference the NDP press release breathlessly accuses BC Liberal candidates of attending.

The NDP war room might have also learned that ARPA doesn’t “campaign” for any party or candidate. We help ordinary citizens through education on political issues, always maintaining a strict non-partisan stance. A major part of our support base happens to be non-voters: youth between the age of 15 and 17.

It is disappointing that the NDP would condemn the very thing on which a health democracy depends. They vilify BC Liberal MLAs for meeting with people associated with ARPA. Is the NDP suggesting that some citizens (i.e. Christians) are unworthy of a politician’s attention? That meeting with or talking with Christians is unacceptable?

Many politicians (not just NDP) celebrate diversity, but only in a shallow form. Where views do not align with their own “progressive” ideology, they ignore or condemn them. . . .

Federally or provincially, in almost every election campaign now, the party that wishes to appear the most “progressive” tries to dig up examples where opposing MLAs or MPs have expressed contrary views on social issues that they deem sacred, usually related to sexuality or abortion.

Although many in the mainstream media still lap it up, one of the costs is that political parties are falling out of step with many citizens. They wonder why so few people care enough to vote, not realizing what it feels like to be on the receiving end of their mudslinging. A party that has “democratic” as its middle name should realize this.

Laurie Throness plans to continue running as an independent; he made this statement October 16:

This week I used an incorrect word to explain my concerns about an NDP platform proposal to provide free contraception. I want to apologize to all concerned for the damage done to my MLA colleagues and the Leader. Andrew Wilkinson is a good man who has dealt kindly with me on a personal basis throughout the summer and even yesterday. He should be our Premier.

As MLA I have always sought to speak from my heart and my conscience. Now, a great many have reached out with messages of support, urging me to continue to do that.

It is vital to deliver our riding for free enterprise. Moreover, Chilliwack-Kent voters deserve a viable small ‘c’ conservative MLA who is unafraid of the freedoms of speech and religion, who embraces the thousands of social conservatives in this riding as well as social liberals, and who advocates for free-market and affordable government solutions to public policy issues.

So I will continue. I am still on the ballot as a BC Liberal. I will inform voters that if they vote for me, I will sit as an Independent in the House and continue to speak from my heart and my conscience. 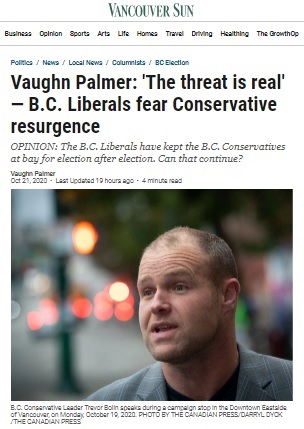 BC NDP strategists may have had the big picture in mind when they went after social conservatives. BC Liberals stand to lose more than just one candidate.

As Vaughn Palmer wrote in The Vancouver Sun, ‘The threat is real – BC Liberals fear Conservative resurgence’:

If [Throness] does win, one could imagine him switching his party affiliation to Conservative, particularly if that party were able to elect at least one other member as well.

Two members would be enough to give the Conservatives official party status, under the legislative rule change made to accommodate the Greens.

Party status means extra resources and a salary top-up for the leader and other functionaries. It also means a seat in the debates in the next election.

The New Democrats have long hoped for a split on the centre-right to counterbalance their own split with the Greens. The Liberals have successfully kept the Conservatives at bay in election after election.

But with party unity already fraying during a lacklustre campaign, the Liberals may not be able to stifle the possibility this time around.

The Angus Reid report noted that a large percentage of the population has voted early, but that many of those who had not yet voted were still undecided. There are guides to help with that.

The BC Election Catholic Voters Guide is quite thorough. Released October 15, it was updated on the 19th. The B.C. Catholic provided an introduction, noting that they have been aided by the work of Catholic Conscience, whose mission “is to share Catholic social teaching . . . so [it] can become a transformative force in Canadian society and politics.” 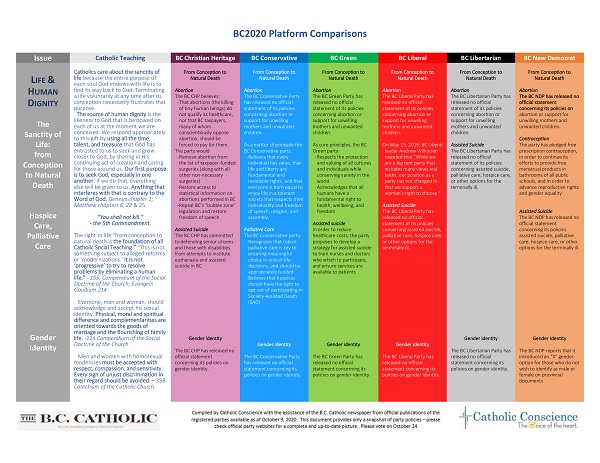 The guide covers a wide range of issues – a good balance of what might be described as social conservative and social justice interests – with responses from each of the six parties listed side by side.

These are the issues addressed:

Go here for the introductory article (accompanied by an outline of Catholic teaching, relevant scripture and ‘points to ponder’) and here for a pdf version with side-by-side columns.

ARPA Canada has also provided some guidance for choosing candidates in the BC election.

It is good to see the number of churches being used as voting places, both for advance voting and on October 24.