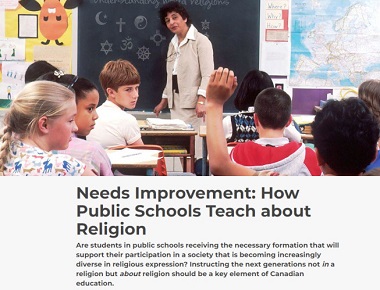 A Cardus report released January 26 – Needs Improvement: How Public Schools Teach About Religion – finds that most provinces fail to teach kids about religion in a balanced and informed way.

Following are the Executive Summary and Recommendations. Go here for the full 26-page report.

This paper represents an initial exploration of the way in which religion and belief are addressed in primary- and secondary-school curricula in four Canadian provinces: British Columbia, Manitoba, Ontario and Nova Scotia. These provinces represent a diversity of size, geography, and religious and ethnic makeup, and are indicative of the growing pluralism of 21st century Canada.

In undertaking this study, we were particularly concerned to find out how Canadian students in public schools are informed about religion, religious beliefs and practices – key components of this deepening pluralism.

Are students in public schools receiving the necessary formation that will support their participation in a society that is becoming increasingly diverse in religious expression? Instructing the next generations not in a religion but about religion should be a key element of Canadian education.

The public schools in these four provinces take varied approaches to engaging religious topics. We find Ontario to be the stand-out example of a more expansive engagement with religion, both in terms of exploring the various religious traditions’ history as well as how they are lived out in the lives of Canadians today.

The curricula of the other three provinces tend to present religion primarily from a distanced, historical or sociological perspective. In some instances, we find that these curricula present some religions or spiritualities in consistently favourable or unfavourable ways, despite the officially secular, non-sectarian nature of public education.

Other religions appear absent from the curricula, despite the particular province, and Canada as a whole, having significant communities that represent these faiths. We argue that these deficiencies do not serve Canadian pluralism well.

In our introduction we posed several questions to help frame our inquiry. We return now to three of them and offer some recommendations to ministries of education, teachers, faith leaders, and faculties of education.

How can we as Canadians help to ensure through public education that Canada’s deepening religious diversity leads not to division but toward strengthening social cohesion? How can we ensure that our public schools support students in learning to respect and form relationships with those who hold different beliefs from them? How can we support curriculum development so that the role of religion in our society is taught in a balanced and informed manner?

Religion is ultimately not something that is merely studied but something that is lived. As our country continues to diversify we must not lose our ability to communicate in a thoughtful and informed way with our neighbours about the things that matter to us most deeply, such as why we believe what we believe and how it leads us to act.

Without the ability to speak about religion in the public square, due to a loss of a common vocabulary, we will grow increasingly distant from one another and misunderstand one another.

If public education is truly about forming each generation so that they may play an active role in society and contribute in meaningful ways, it must reflect the fact that religion affects and shapes the lives of many Canadians.

As we exit from the COVID-19 pandemic, young people are going to have questions about truth and meaning, and will need to develop skills that help them to build community. Actively engaging and recognizing religion’s role in this and drawing from faith communities’ deep wells of wisdom about the human condition will be indispensable. 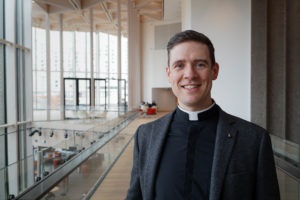 These excerpts make up just a small portion of Needs Improvement: How Public Schools Teach About Religion, which is freely available online.