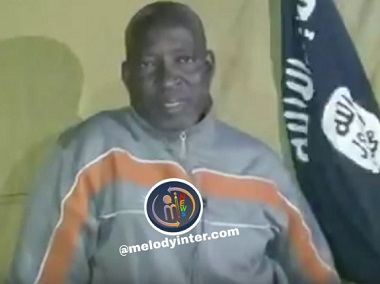 Rev. Lawan Andimi was abducted and then executed by Boko Haram. Photo from YouTube video made while he was in captivity.

Following is the text of his statement, followed by portions of a comment by Nigerian President Muhammadu Buhari (found on the Christianity Today site), and then by part of a statement from the Religious Liberty Partnership.

On behalf of our global family of 600 million evangelicals in over 130 countries, the World Evangelical Alliance (WEA) expresses its deep sadness and concern about the ongoing violence and the killing of innocent lives in Nigeria on an almost daily basis.

We are appalled at the ruthlessness of the kidnappings and attacks, but are also very concerned about the insufficient response by the Nigerian government in both preventing such crimes and holding the perpetrators to account.

Most recently, we received the sad news of the execution of Rev. Lawan Andimi and of 22 year old university student Mr. Ropvil Daciya Dalep by Boko Haram. There was also another attack on a pastor’s house, the church building and the congregation, with more than 30 Christians killed by Muslim Fulani herdsmen in Plateau state.

The month of January has proven to be a bloody month as virtually no day passed by without one form of attack or another.

This stark reality becomes even more apparent when comparing the country to the rest of the world: in 2019, Nigeria accounted for some 45 percent of Christians killed for their faith globally – approximately 1,350 out of 3,000 deaths. This led Open Doors to rank Nigeria at number 12 on its 2020 World Watch List of “50 places around the world where it costs the most to be a Christian.”

We urge President Buhari and the Nigerian government to put an end to these attacks, to decisively combat the prevailing impunity for killings, and to ensure institutional accountability. We also urge President Buhari to strengthen his efforts to liberate the hostages held by Boko Haram and the Islamic State in Nigeria. The release of Leah Sharibu, a Christian school girl held captive for almost two years, and other hostages has long been overdue.

Furthermore, we appeal to the government to ensure that the composition of the leadership of Nigerian security chiefs is more reflective of the ethnic and religious diversity of Nigeria. Such an effort would promote a greater sense of inclusiveness among the population, which in turn contributes to a higher degree of social cohesion.

We call on Christians worldwide to join our Nigerian brothers and sisters in prayer and fasting for an end to the violence, for peace and security to prevail, and for wisdom for the Nigerian authorities as they seek to bring about an end to the suffering of their citizens. 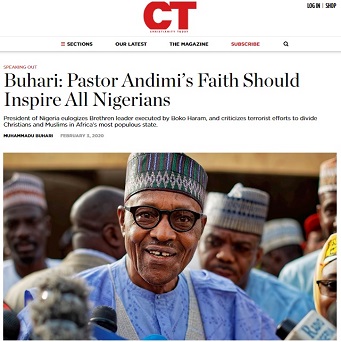 An article in the leading evangelical publication Christianity Today gave Nigerian President Muhammadu Buhari the opportunity to state his views before an audience which might be inclined to suspect him of supporting or at least condoning violence against Christians.

He wrote, in part:

Nigerians everywhere, those of belief and those of none, are mourning the death of pastor Lawan Andimi, taken from us by Boko Haram for his refusal to denounce his Christian faith.

I did not know Pastor Andimi personally. Yet Nigerians and I both know him and his church by their works: healing, caring, feeding and educating, particularly in the northeastern regions of my country – in those areas threatened for too long by terrorists. Every day, the Church of the Brethren in Nigeria (EYN) places itself there bravely where the brotherhood of man is most in need of sustenance.

Pastor Andimi’s ministry was located only 60 miles from the town of Chibok, from where in 2014 the world witnessed the shocking kidnapping of 267 schoolgirls. That even one individual – this time a man of the church – could still be taken by the terror group seven years later might be viewed as evidence the terrorists are fully functional, and undefeated. But it is not.

Since I was first elected to office in 2015, 107 of the Chibok girls have been freed. Today we seek the others. Boko Haram are no longer one, unified threat, but fractured into several rivals. These splinters are themselves degraded: reduced to criminal acts which – nonetheless no less cruel – target smaller and smaller numbers of the innocent. We owe thanks to the Nigerian defense forces, bolstered by our partnership with the British and American militaries, that we are winning this struggle in the field. . . .

It is a simple fact that these now-failing terrorists have targeted the vulnerable, the religious, the non-religious, the young and the old without discrimination. And at this point, when they are fractured, we cannot allow them to divide good Christians and good Muslims from those things that bind us all in the sight of God: faith, family, forgiveness, fidelity and friendship to each other.

Yet sadly, there is a tiny, if vocal, minority of religious leaders – both Muslim and Christian – who appear more than prepared to take their bait and blame the opposite religious side. The terrorists today attempt to build invisible walls between us. They have failed in their territorial ambitions, so now instead they seek to divide our state of mind, by pulling us from one from another – to set one religion seemingly implacably against the other.

Whether or not the statement by Bishop Tendero was intended as a response to President Buhari’s comment – it was posted the day after his – it did conclude with a link to an April, 2019 Abuja Statement on the Crisis in Central Nigeria from the Religious Liberty Partnership which is not as positive as Buhari about state actions:

We are also concerned by the violence that continues to devastate farming communities in Adamawa, Bauchi, Benue, southern Kaduna, Nasarawa, Plateau and Taraba states, and a concomitant proliferation of small arms that contributes to a general rise in insecurity.

The death toll in these states, where thousands of men, women and children from minority ethno-religious communities have died and thousands more have been displaced in attacks perpetrated by a well-armed militia consisting of members of the Fulani ethnic group, is deeply worrying.

Also worrying is the seeming lack of an effective security strategy to counter these attacks which, regrettably, has resulted in periodic retributive violence as communities conclude they cannot depend on government for protection or justice.

Further, while the militia men reportedly are neither traced nor prosecuted, members of victim communities who articulate their concerns experience an array of repercussions that include threats, arbitrary arrests and judicial harassment.

While we recognise there is a long history of disputes between nomadic herders and farming communities across the Sahel, we believe the current attacks in Nigeria, which do not occur in neighbouring countries experiencing similar environmental challenges, can no longer be attributed to desertification or to a struggle for resources. They now occur with such frequency, organisation and asymmetry that references to ‘farmer-herder clashes’ no longer suffice.

Significantly, in a ruling delivered on 26 February 2019 in a case involving militia violence in Benue state that claimed around 500 lives in 2016, the Court of Justice of the Economic Community of West African States rejected the characterisation of these attacks as communal clashes between farmers and herders, and also dismissed the contention that the government of Nigeria could not be held responsible for any ethnic crime committed by unidentified and unknown persons. . . .

Go here for the full statement, and for a list of members of the Religious Liberty Partnership.

← Around Town: Inspire City Officials, Joan of Arc, Cost of Colonialism, C2B . . .
Conversion Therapy: is it either? →