The authors of No Vacancy: Affordability & Homelessness in Vancouver were Bernie Pauly, RN, PhD and Geoff Cross, MA, both with the Centre for Addictions Research of BC, and Derek Weiss, MA of Union Gospel Mission.

Local media covered the No Vacancy report promptly: among them were CBC’s Early Edition, The Province, Global News and News 1130.

Following is the executive summary of the report; for the full report go here. 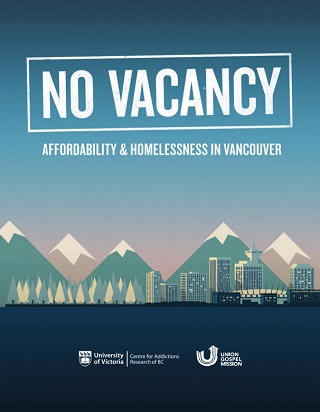 Homelessness is the result of the interplay between structural factors (e.g. cost of housing and income), systemic failures where people “fall through the cracks” (e.g. discharge from hospitals without housing), and life circumstances (e.g. job loss, illness, or family violence).1

While all three elements are important, this report examines the structural factors which lead to homelessness. It complements the point in time count by reporting on factors such as vacancy at low-end-of-market, costs of average rent, available income, cost of living, and social housing built and rent supplements provided.
The results of this research are alarming. In the Metro Vancouver region:
• Shelter occupancy is at 97%, and the percentage of women in shelters has grown from 28% in 2011-2012 to 32% in 2015-2016.

• Vacancy for most affordable rental units is below 1% and has dropped for most categories in the last year. In the most extreme category (bachelor suites renting at less than $750 in the City of Vancouver) vacancy is 0.1%.

• The supply of bachelor and one bedroom suites at the low end of market (renting at less than $750) has declined.

• While there are 42,171 permanent subsidized housing units and new units have been added yearly, more than 10,000 individuals or families in Metro Vancouver are on BC’s Housing Registry, waiting for suitable housing.

• Income assistance has not increased in 9 years while average market rent has increased every year since 2010.

• The number of people housed by homelessness outreach programs has increased over the past five years.

Despite the positive steps that have been taken, virtually every indicator points to an increase in homelessness and housing insecurity in Metro Vancouver, both now and incoming years as a result of structural factors, often beyond an individual’s control.

Unless significant action is taken to address these structural factors, homelessness will continue to impact a growing number of individuals and families. 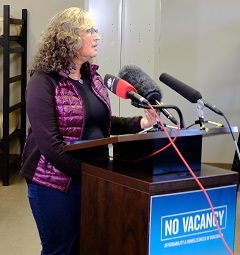 Bernie Pauly, one of the authors of ‘No Vacancy,’ spoke at UGM October 12.

The Centre for Addictions Research of BC (CARBC) is “a network of individuals and groups dedicated to the study of substance use and addiction in support of community-wide efforts to promote health and reduce harm. Our research is used to inform a broad range of projects, reports, publications and initiatives aimed at providing all people in BC and beyond with access to happier, healthier lives, whether using substances or not.”

UGM’s mission statement is: “Demonstrating the love of Christ Union Gospel Mission is determined to transform communities by overcoming poverty, homelessness and addiction one life at a time.”