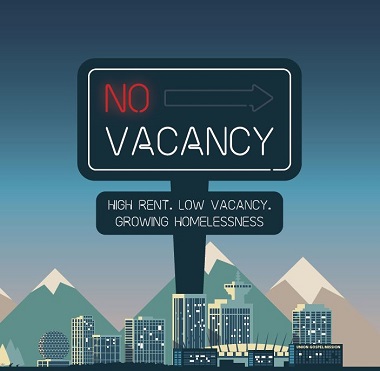 This week (October 7 – 13) is Homelessness Action Week, and no one can argue that Union Gospel Mission (UGM) is not doing its share.

On Monday, volunteers served meals to more than 3,000 people. (See the Vancouver Sun’s article about Kevin Knight, who used to eat meals at UGM, but now runs a ministry in Cambodia for people who have been evicted from their homes. He was back at UGM this week to help serve the Thanksgiving meal.)

And today UGM released its latest ‘No Vacancy’ study.  No Vacancy: High Rent. Low Vacancy. Growing Homelessness (pdf) , which follows up on a similar report undertaken in 2016 with the University of Victoria’s Canadian Institute for Substance Use Research (CISUR).

Following is UGM’s overview of its new study; for the full report go here (pdf).

A new report shows Metro Vancouver’s affordability crisis is surging into the suburbs at alarming speed, hammering low-income families and disproportionately affecting mothers on the brink of homelessness.

The report, which is titled No Vacancy and was coauthored by Union Gospel Mission and Dr. Penny Gurstein from UBC’s School of Community and Regional Planning (SCARP), reveals the following key findings:

• Vacancy rates outside the City of Vancouver have dramatically decreased. Suburban cities that once were an affordable refuge, such as Surrey and Burnaby, are now witnessing the most striking changes. Surrey’s vacancy rate fell from 5.7 percent in 2012 to near zero in 2017.

• There has been a 32 percent surge in the number of Metro Vancouver families on BC’s housing registry since 2014. This compares to a rise of 3 percent between 2012 and 2016. 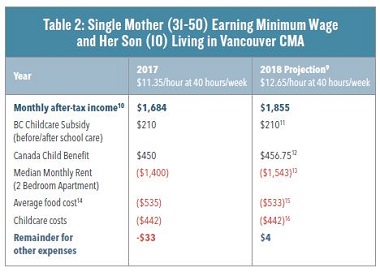 • A mom who is supporting a 10 year old child, while working full-time at minimum wage, would have just $4/month remaining after covering basic expenses, which do not include transportation costs, clothing, dental coverage, etc.

• 61 percent of families on the housing registry are led by single parents, and approximately 87 percent of these families are female-led.

• For families seeking affordable housing at the low end of market, particularly those renting at less than $750 per month, there are virtually no vacancies for two bedroom units (0 percent). Additionally, between 2012 and 2017, overall vacancy rates for two bedroom units dropped in Surrey from 6.5 percent to 0.7 percent, and in Burnaby from 2.8 percent to 0.8 percent.

• Shelter occupancy has consistently been over 100 percent for the past five years.

The report indicates these structural factors are particularly punishing for mothers like Jackie Myerion. After being evicted from her Surrey basement suite this summer, Jackie, along with her partner and two young children, resorted to living in a park, camping inside a tent for an entire month.

“It was devastating,” says the 35 year old. “It was horrible, really horrible to find housing.”

“I never thought we would be in that position,” says her 35 year old partner Jesse. 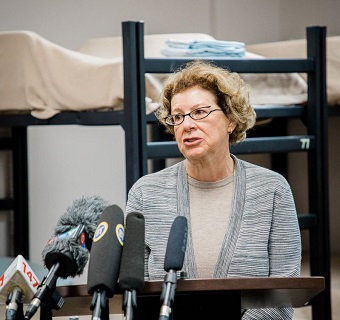 Dr. Penny Gurstein of UBC’s School of Community and Regional Planning spoke at UGM October 11; she is one of the authors of the report. UGM photo.

“Given the data, it’s no surprise that homelessness has continued to rise,” says Dr. Penny Gurstein of UBC’s School of Community and Regional Planning. “The crisis is particularly pronounced for low-income families because of low vacancy rates, rising rents and lack of adequate housing.”

As the crisis spreads, Union Gospel Mission is urging residents to ‘vote with affordability and homelessness in mind’ during the region’s municipal elections, launching a website that allows voters to easily research: 1) which mayoral candidates are running in their city, and 2) what those mayoral candidates have to say about addressing affordability and homelessness.

“The crisis is both pushing new people into homelessness and making it harder to escape,” says UGM’s Jeremy Hunka. “We’re not telling people how to vote. We’re giving them the tools to be educated at the ballot box and vote according to their convictions. The more focus on homelessness, the better, because lives are at stake.”

The authors of the report are:

UBC’s School of Community and Regional Planning (SCARP), founded in 1951, was one of the first dedicated planning schools in Canada. It is also one of the country’s largest, with 15 faculty and over 100 students. The school’s mission is to advance the transition to sustainability through excellence in integrated policy and planning research, professional education and community service.

Union Gospel Mission (UGM) has been feeding hope and changing lives of men, women, youth and children for more than 77 years. Through its seven locations in Metro Vancouver and the city of Mission, UGM provides emergency shelter, meals, outreach, career development counselling, education, safe and affordable housing, addiction recovery and much more to those struggling with poverty, homelessness and addiction. The heart of the mission is to demonstrate God’s transforming love, ease the burden of the most vulnerable, rebuild lives and offer dignity to those who feel cast aside.

← Responding to SOGI: should we fight, embrace or engage?
Good citizens ready for ‘real life’ at half the cost →