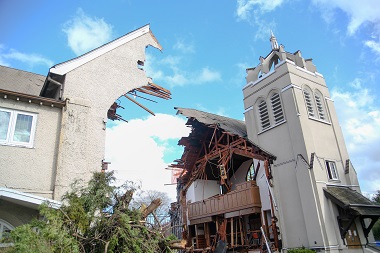 It is heartening to see the public concern over the demolition of a lovely church building near 41st and Cambie March 1 – though it is all too late to actually save the building.

This was a March 5 tweet from the Vancouver Courier:

The pictures shocked the city over the weekend: the toppled steeple, the smashed wood and windows, fragments of stained glass lying broken in the dirt. Why do you think the demolition of Oakridge United Church struck a nerve? http://bit.ly/2thIYFv  @HeritageVan #vancouver #vanre

Heritage Vancouver reminded us March 2 that they had placed Oakridge United on their 2015 Top 10 Watch List, stating at the time:

As attendance continues to decline at many Vancouver churches, many of our significant spiritual heritage buildings are threatened. When these buildings close, Vancouver communities lose more than Sunday worship space; they lose space for the countless social and cultural activities that churches accommodate seven days a week.

This is the second year in a row that heritage churches are featured on our Top Ten List of Endangered Sites. Kerrisdale Baptist Church, which was on the 2014 List, appears doomed, to be replaced with a generic 4-storey residential / commercial building, resulting in a loss of valuable community cultural space in the centre of Kerrisdale.

With fewer places for groups to meet in our ever-denser city, more people will become isolated, diminishing our quality of life. Public gathering places are essential to a healthy community, and churches represent a very significant amount of our city’s assembly spaces. 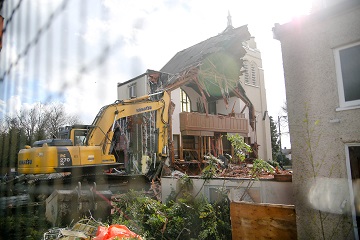 Articles in The Tyee and the Vancouver Courier did a good job of putting the situation in perspective.

Christopher Cheung was right on the spot March 1, and took some impressive pictures of the demolition (which he was gracious enough to allow me to use). Writing for The Tyee, he pointed to the sense of loss experienced by parishioners, but also the potential to help the community while carrying on church in a different setting:

“Even when you’ve got all the memories, it’s still a sad thing,” Valerie Weinert told me two years ago.

Weinert, born in 1948, grew up attending the church with her parents, went to Sunday school in the gym and was married in the sanctuary. It was packed with people back then. If her family was late for Christmas and Easter services, they had to sit in the basement and listen to the service from a pipe.

But the congregation declined in the years since, and most of its members are over 50.

For religious and community groups losing members, those that own property often do one of two things: sell or redevelop. Those who redevelop usually take the opportunity to serve the community in a new way: creating housing, including condos, rentals and social housing.

Go here for the full article and all the pictures. 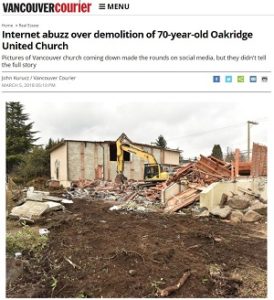 Referring to “all sorts of anger and confusion about the demolition,” John Kurucz interviewed two key church representatives for the Vancouver Courier.

We asked the developer, Townline Homes, church minister Neill McRae and a provincial representative with the United Church of Canada some of the most pressing questions surrounding the project.

First question: why was the building, which was designed in 1949 by Twizell & Twizell architects, allowed to be torn down?

Answer: the church wasn’t subject to any specific protections or heritage designations. As such, it was re-zoned from its former land use designation of one-family dwelling to comprehensive development, and will become a mixed-use development comprised of a six-storey concrete building that opens in the fall of 2019.

But what happens to the church?

According to everyone involved, a new 6,000 square foot church will be on the ground floor of the development when it opens next year. Terry Harrison, who works in the property resource field for the provincial arm of the United Church of Canada, said the new church will be built exclusively via developer dough. 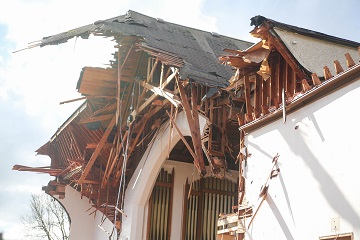 OK, but has the congregation been displaced?

Yes and no. McRae said parishioners knew of the site’s impending sale five years ago and the deal was finalized last year.

“We bit by bit prepared the congregation,” he said. “They understood it. It was not manipulative. It was informative so that they got it.”

McRae explained that the building was decommissioned last spring. Harrison said it hasn’t been in use since. Roughly 60 worshippers have been moved to another church in Marpole and will return next year.

“We will absolutely be going back,” McRae said. “And there will be others coming with us.”

During a report to Vancouver City Council September 20, 2016, the Acting General Manager of Planning, Urban Design and Sustainability was clearly aware of public concern about the loss of the church building and the fact that the church’s presence would not be as obvious in the new building: 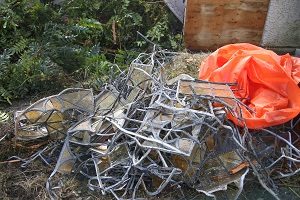 It is recommended that the future design of the project include and incorporate salvaged and reclaimed materials from the church, along with seeking opportunities to re-purpose items into the proposed new church . . .

The following design development conditions (Appendix B) are recommended in response to concerns raised through the application review process, including comments from the public and the Urban Design Panel, as well as staff input and direction:

• Further design to enhance and make notable the presence of the church; and