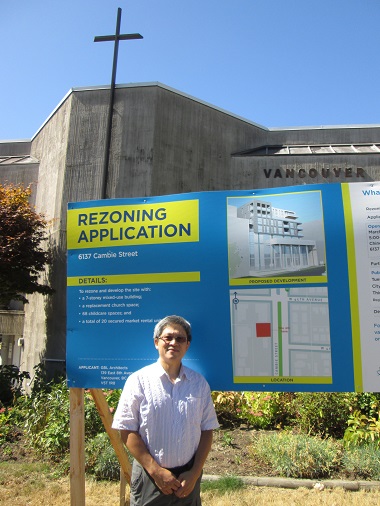 The two churches you can see from the intersection of 41st and Cambie are boarded up and will both soon be gone, each to be replaced by mixed-use six-storey buildings.

Another, just a few blocks down Cambie, has begun a similar process of redevelopment and a fourth is considering it.

In each case the church will retain a presence in the new building, though it will be interesting to see how visible that presence is.

The latest church to initiate a redevelopment process is Vancouver Chinese Presbyterian Church, just south of 45th Avenue on the west side of Cambie.

This is posted on the City of Vancouver website:

The City of Vancouver has received an application to rezone 6137 Cambie Street from CD-1 (12) to a new CD-1 (Comprehensive Development) District under the Cambie Corridor Plan. The proposal is for a seven-storey mixed-use building over two levels of underground parking, including:

There will be a public hearing September 19, 6 pm, at Vancouver City Hall in council chambers. An open house was held at the church March 14.

Go here to see a July 11 policy report from Vancouver’s general manager of planning, urban design and sustainability. GBL Architects are partnering with the church. 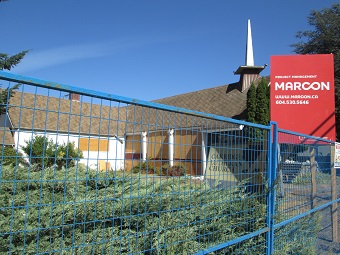 Oakridge Lutheran Church is all boarded up, ready to be torn down.

Oakridge Lutheran Church – just one short block west of Cambie, across 41st from Oakridge Centre – is all boarded up and looks to have been emptied out.

The congregation is now meeting at Redeemer Lutheran Church on Granville just north of King Edward until it can move back to their new home in a couple of years.

Here is some of an article I posted at the time of Oakridge Lutheran’s open house for the project in February 2016:

In a February 22 Vancouver Courier story, Pat Johnson described the partnership between Oakridge Lutheran and Catalyst [Community Developments Society] in this way:

Together, they developed a vision for the project, and Catalyst is now shepherding it through the city’s approval process. The plan is to build six levels, with retail space at street level. The second level, with its own entrance off Ash Street, would be the church’s sanctuary and multipurpose community space. Atop this would be four more stories accommodating 46 units of housing intended to be offered at below market rates.

Catalyst president Robert Brown took part in a Churches and the Housing Crisis event at Regent College January 27. He sees the likelihood of more churches taking on projects similar to Oakridge Lutheran’s:

I think, when we started Catalyst, we thought we might be limited by the opportunities but in fact that’s just not the case. There’s just so much potential and as churches become more aware of what their options are, then . . . the idea of being able to get a new facility, retain ownership in something more than just a church and being able to generate a revenue stream, I think there’s going to be just more and more interest in it.
Catalyst is working on a similar project with St. Andrew’s United Church and the BC Conference of the United Church of Canada in Port Moody. Go here for a March 7, 2017 story in the Tri-City News.
Oakridge United 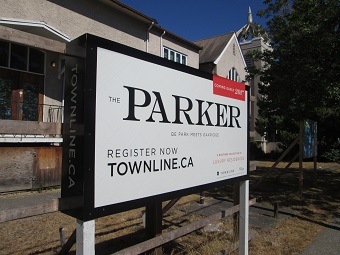 The Parker, which will replace Oakridge United Church, will be “a boutique collection of 47 luxury Westside residences.”

Oakridge United Church has also moved out of its historic building on 41st, just east of Cambie, and is now meeting at Marpole United, on 67th Avenue between Granville and Oak.

Replacing it, according to their partner developer Townline, will be The Parker, “a boutique collection of 47 luxury Westside residences in Vancouver’s prestigious Oakridge neighbourhood, steps from Oakridge Mall, 41st Ave Canada Skytrain station and Queen Elizabeth Park.”

I posted this shortly before the church’s open house in October 2015:

According to an October 7 posting on Vancouvermarket.ca by “keen observer of local planning policy” David Taylor, Townline Homes has filed an application under the Cambie Corridor Plan to rezone the Oakridge United property from RS-1 to CD-1. . . .

Heritage Vancouver obviously saw this proposal coming, because they included Oakridge United on their 2015 Top 10 Watchlist in May. The group is not in favour of the proposal:

Time will tell what the effect of losing church buildings will be. There is some potential that churches will have more access to the surrounding community in their new settings.

But pastor Dave Koop of Coastal Church offered this pertinent comment (not specifically related to the churches around 41st and Cambie) in a 2015 post by Frank Stirk (‘New churches have a tough time finding a home in Vancouver’):

Koop says while he believes Christians should be gathering to worship in all kinds of places, the fact is these buildings still send a strong cultural message to non-Christians.

“When you invite somebody to church, they still think that you’re going to a building, it’s got to have pews, and you should be there Sunday at 11 o’clock,” he says. “So when these buildings disappear, then it’s like, ‘Christianity is on its way out.’ But if we’re taking these old buildings and breathing new life into them, then it’s, ‘The church is strong and healthy.’ It becomes more attractive to the unreached.”

A Business in Vancouver article (‘Separation of church and real estate’) earlier this year noted the pressures on congregations. It said:

. . . at least two dozen Vancouver churches, and at least that many across the rest of the Metro region, [have been persuaded] to sell property in the past two decades. Eleven church properties have been demolished since 2000, according to city data.

The trend has accelerated in recent years, due to both declining church attendance and rising real estate values.

For many churches, the attraction is not money, but rather a chance to use the equity for community good, and the continuation of the congregation in a smaller floor plan.

The article refers to Oakridge Lutheran and Oakridge United as examples of such churches – and no doubt would consider Chinese Presbyterian Church a similar case. So, we will see whether the loss of church buildings will prove a loss to the city – but at least each of these three churches will be retaining a presence in the city.

I understand that Oakridge Baptist Church – just a couple of buildings south of Vancouver Chinese Presbyterian – is considering redevelopment as well. And it can’t be too long now before the Church of God in Vancouver (Cambie Gospel Hall) project will be completed at 61st and Cambie.

← Informed from above
Around Town: Walk for Reconciliation, Family Matters, Reformation →