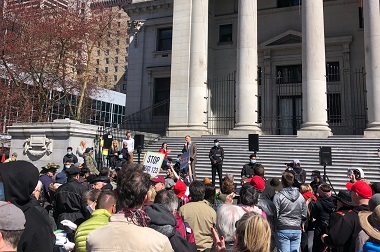 Elyse Vroom took this photo at the ‘Stand Up Speak Up’ rally she attended April 10.

Should Christians attend or organize public protests of bad laws, or rallies in support of good laws?

That was the question I asked myself when presented with an invitation to attend an event on the steps of the Vancouver Art Gallery.

The rally was being organized in support of a father who is in jail for the “crime” of going against a court order by expressing concern about how transgender ideology is affecting his child.

I admit I was not especially excited to attend this rally on the steps of the Vancouver Art Gallery. Yet, I made the decision to go after being prompted by a conversation with my colleagues the previous day.

We discussed the pros and cons of attending rallies and lamented that previous rallies we had attended were largely monopolized by extremists that we didn’t want to identify or associate ourselves with. All too often, public protests are taken over by radicals on either side of an issue.

In our conversation, one of my colleagues cautioned that in our desire to distance ourselves from extremists, we may adopt the ever-prevalent ‘Canadian nice’ mentality, not wanting to take a public stand for anything, lest we be seen as weird.

It is important to consider who is making the stand for us in the public square. If we are absent, who is representing Christians and speaking up? Is it surprising to us that the Christian voice is largely absent in the culture and public narrative?

It is easy to sit at home on our computers and voice our opinions to the echo chambers of our own communities on social media. It is another thing altogether to go to the public square and speak the truth, where you may be screamed at, or worse yet, egged for speaking the truth, which happened at the rally on Saturday (though luckily no one was hit).

Whether we want to admit it or not, many of the people at these rallies are our mission field. They need to hear the truth of God’s word. And they aren’t going to hear it when we stay home. If we don’t want the extremists driving the narrative of what Christians stand for, then it requires us to show up.

At the rally, I was struck by the important presence of the Christian community. When the counter-protestors sought to be disruptive, Christians brought a calm, peaceful presence – a God-glorifying witness to the public square. If we want to change the narrative that Christians are crazy extremists, we need to show up for the rallies and let God do the work.

When Christians faithfully and boldly stand up, speaking the truth in love, respectfully obeying the authorities, not allowing themselves to be antagonized by the enemy, we stand in the power of the Holy Spirit and are a witness, a light pointing to the goodness of our God. Yes, we might be hated, and even egged, but we will have fulfilled our task as salt and light, and we can take heart, for our King has overcome the world (John 16:33).

Our presence matters at public events because if we don’t attend, what are we left with? Polarizing voices on each side of the debate. This not only does a disservice to Christianity, but our absence will cost us. It will cost our children. It will cost our pastors. And it will cost our society as it proceeds to legalize, even celebrate, the destructive transgender ideology impacting our youth, as it lies to them about God’s good design.

I’m glad that I decided to attend this rally. Attending such events will cost us. We may be ridiculed. We may be called upon to have uncomfortable conversations. Some of us may be jailed. Others may be persecuted. But never let it be said that we did not show up when God called us to the battlefield right outside our own front doors.

Elyse Vroom is the administrator for We Need a Law and Yarrow office manager for ARPA Canada.

This comment is re-posted by permission of the author, from the ARPA Canada site.

On April 16, the man whose situation inspired the ‘Stand Up Speak Up’ rally (‘C.D.’) was jailed for six months by B.C. Supreme Court Justice Michael Tammen. Go here for a True North report on the rally and here for a CTV News report on the sentencing.