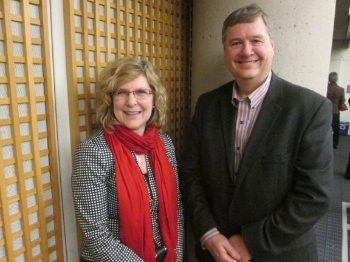 Karen Hamilton and Bruce Clemenger, leaders of the Canadian Council of Churches and the Evangelical Fellowship of Canada, work cooperatively on a number of projects, including ‘Our Whole World.’

Participants from various religious, spiritual and secular backgrounds engaged in conversations in lecture theatres and corridors at UBC Robson Square, over a three-day period earlier this week. They focused on the interests of “bridging the religious-secular divide” and working for “the common good.”

(This report will focus on particular aspects of the conference that are seen to be of interest to Church for Vancouver readers. Many of the addresses will be posted soon to Our Whole Society website. That will enable readers to see the full context of many of the ‘conversations.’)

At the first session, Wade Grant of the Musqueam band greeted attenders with an opening blessing. This was, he said, in line, with their centuries-long tradition of welcoming newcomers to their land. In turn, many of the speakers acknowledged their presence on unceded Coast Salish territory. (The Musqueam, whose traditional territory covers much of the Metro Vancouver area, are among the Coast Salish peoples.) 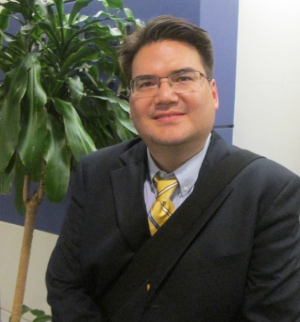 Doug White, former chief of the Snuneymuxw First Nation, gave an impressive speech combining his passion for justice, for his people and for reconciliation.

To conclude the event, late Tuesday afternoon (March 24), First Nations lawyer Doug White, a Snuneymuxw (Nanaimo) former chief and now director of the Centre for Pre-Confederation Treaties and Reconciliation at Vancouver Island University, wrapped up the conference by recounting his own conciliatory pilgrimage. While the content of his message focused on First Nations aspirations and spiritual values, his delivery was warmly reminiscent of homilies delivered weekly in local Baptist or Pentecostal pulpits. He received a unanimous standing ovation.

The conference’s first-night keynote speaker was John Stackhouse, Jr., Sangwoo Youtong Chee Chair of Theology and Culture at Regent College. His presence was acknowledged in the corridors of the event as recognition that evangelical Christians are emerging, despite their reputation for enthusiastic defence of the Christian gospel, as good listeners, understanding spirits and diplomatic communicators.

Stackhouse’s task was to introduce a discussion on the reconciling of religion, secularism and the common good. He began by noting that secularism can be defined in several ways: As “an ideology opposed to religion, a description of social life in a pluralistic society or a preference for political life according nothing to religion.” 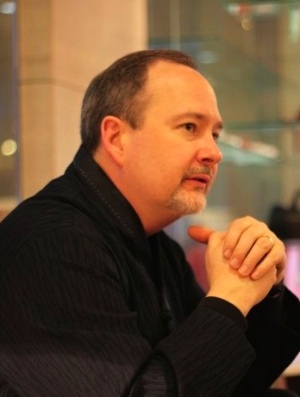 He noted that religious life at the time of Confederation seemed pretty simply related to French Catholicism and British Protestantism.

He added that the British North America Act showed Canadians were led by practical people who [needed to] let the British off the colonial hook, keep the Americans out and get through another winter.”

If it could be argued that “there is nothing interesting in Canada,” Confederation succeeded in dispelling that notion, Stackhouse said. It remarkably brought together into one nation French Catholics and English Protestants. This, after 1,000 years of [French and English] trying to subject or destroy each other, [and] Protestant and Catholic after 500 years of trying to convert or excommunicate each other.”

As the years passed, simplicity became more complicated, with the arrival, for example, of people of Jewish, Ukrainian Orthodox and Mennonite extraction, from Europe.

Grushcow encouraged Canadians of faith and spirituality to be prepared to “shift from who we aren’t to who we are.” And she offered four cautions in this process:

Grushcow spoke of the ability and need “to [recognize] counter-cultural values” and to, for example, communicate equality values to groups that are “all men” or otherwise all fitting one homogeneous set of parameters. 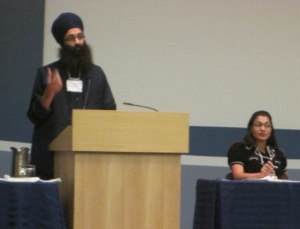 Balpreet Singh, legal counsel for the World Sikh Organization of Canada, pointed out that Sikh founder Guru Nanak was killed for standing up for the human rights of others.

Monday’s sessions began with a focus on ‘Building Our Whole Society.’ The workshops had themes surrounding ‘youth and the spirit of social change’ and ‘walking the path of reconciliation.’ A later plenary moved into the area of religious pluralism in a secular society, with workshops developing themes related to ‘building communities in our cities’ and the ‘values and limits of religious accommodation.’

It was in that context that one of the predicted points of interest in the conference – the current controversy over opposition to the proposed Trinity Western (TWU) School of  Law – was woven into the conversation by Paul Bramadat, director of the Centre for Studies in Religion and Society at the University of Victoria.

Bramadat noted that while he himself does not agree with the part of the covenant that limits marriage to one man and one woman, he is quite favourable to the idea of TWU being able to retain the covenant while having a law school. But he added that many of his colleagues and friends – generally broad-minded and rational people – seem to have a profound dislike for the idea of a TWU law school.

One friend, he added, was particularly vocal in her contention that the whole controversy was reflective of what she described as the downside of the Stephen Harper regime.

On Tuesday, Douglas Todd, religion/ethics/spirituality writer for The Vancouver Sun, had presentations at both the morning plenary on ‘Freedom of Religion or Freedom from Religion’ and a workshop on ‘religion and the Canadian newsroom.’

He articulated the benefits of being a “beat” reporter – that is one who works in a specific area, rather than as a general assignment journalist. That gave him the opportunity to learn deeply about the area in which he has specialized most of his career. But it also meant he needed to be well versed, not only in religion or faith, but in “sociology, culture and psychology” because all three of those areas are essential to the full understanding of both religion and spirituality.

Todd noted that when he started covering faith and ethics, he had several colleagues in other papers across the country. Today, as far as he is aware, he is just about the only religion reporter left.

Most of the final afternoon explored the future of interfaith emphases in Canada. Some sessions reflected on iconic writers who had perspectives on religious belief as it relates to larger communities.

One plenary, on the ‘challenge of the post-secular in Canada,’ drew from German philosopher Jurgen Habermas, whose Notes on a Post-secular Society, according to the plenary outline, “describes the persistence of religious belief and communities as signifying a ‘post-secular society’. The persistence of religion in advanced modern societies challenges citizens of different religious and secular backgrounds to communicate in new ways. How can we learn to talk together about the issues of the day without marginalizing religious or secular societies?” 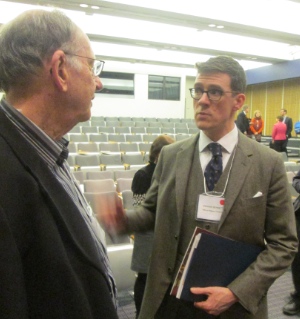 Andrew Bennett, the Canadian Ambassador for Religious Freedom, was also on hand to respond to the “without marginalizing” question. He was careful to note that his mandate, as part of the federal ministry of foreign affairs, is to focus on religious freedom issues in other countries, where a Canadian diplomatic foray can be of assistance.

But he acknowledged that sometimes religious freedom issues that permeate other countries can be echoed in Canada through the presence of people who have moved here from those countries.

Bennett held his ground on the parameters of his role under close questioning from two audience members who were critical of current Canadian foreign policy. He pointed out that, “when I became a public servant in 2001, I took a vow of loyalty.” That vow, he added, causes him to take seriously the task of working within the parameters of his role.

A ‘doing interfaith in a secular age’ workshop reflected on the writings of Charles Taylor and his focus on the idea that “our secular age is one where religion is optional – it is no longer assumed that one is or ought to be religious.” It posed the question: “How can interfaith dialogue get out of this ‘immanent’ frame to bring back the language of the spiritual and the sacred to public discourse?”

The sponsor and host for the event was the Vancouver-based Laurier Institution, billed as a “national, non-profit, non-partisan organization, [with] research and educational activities funded by membership fees, donations, sponsorships and project-based funding.”

Organizers are considering another event for 2017 – maybe in Ottawa, to coincide with the 150th anniversary of Confederation.

The full roster of speakers and workshop leaders included:

The sponsoring organizations, besides the Laurier Institution, were:

Editor’s note: We have reworked (on the morning of March 26) the first part of the story, related to professor John Stackhouse and Rabbi Lisa Grushcow. We apologize to the speakers and to readers for having mixed up some of the content of the two talks. You will see some reference to that confusion in the letters below.

← The Whipping Man: Observing Passover in the shadow of slavery and war
Training for justice: Responding to the call of a new generation →