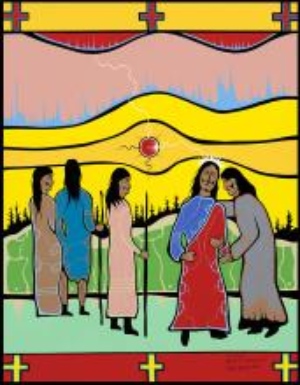 We’re right on the cusp of Reconciliation Week, which is centred around the alienating legacy of Indian Residential Schools.

So this is the ideal time for an art show, by an Aboriginal artist, illustrating God’s way of reconciliation. And that’s exactly what the ‘reForming Relationships’ art tour at First Christian Reformed Church of Vancouver (Victoria and 11th) is all about.

Kisemanito Pakitinasuwin – The Creator’s Sacrifice tells the foundational Christian story of Jesus’ death and resurrection – the story that makes all things new.

Organizers of the exhibit point out that “these paintings were inspired by the tradition that before Europeans reached Turtle Island [North America], Aboriginal elders had visions of people coming from the east with messages from the Creator.

“Inspired by that tradition, Indian Metis Christian Fellowship commissioned Ovide Bighetty to create a series of paintings depicting the visions of those Aboriginal elders.” His paintings are consistent both with the gospels and his Cree Missinippi Ethiniwak culture. 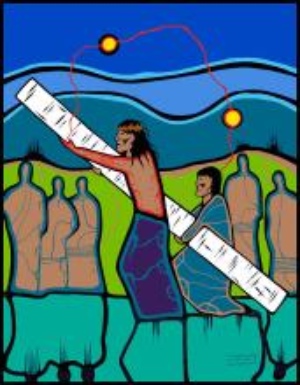 The Weight of Our Sins

In 2002, Bighetty created Kisemanito Pakitinasuwin – The Creator’s Sacrifice. This series of 17 images in acrylic on canvas presents the Easter story in his Woodland style. Though clearly influenced by Norval Morriseau, Bighetty has developed a unique approach to his work.

“Its vibrant imagery . . . invites us to re-imagine how we think about and live out the relationships between Aboriginal and non-Aboriginal peoples in Canada. Through these works of art, the Spirit of our Creator invites us to live in new ways – in re-formed relationships of peace and friendship.”

Members of First CRC put a lot of work into bringing the exhibit to their church. A special evening featured a presentation by Patti Victor, pastor of Chilliwack Native Pentecostal Church, followed by food and drink – including bannock – in the hall.

Victor stressed the importance of moving beyond theory to action. She said that as Christians, “We don’t speak truth, we live truth.” 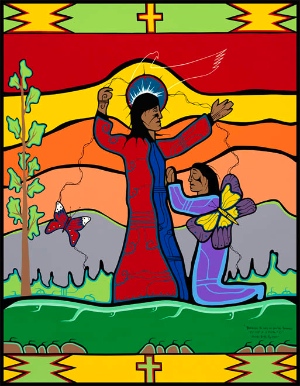 Because He Lives We Can Face Tomorrow

When you befriend an Aboriginal person, she asked rhetorically, “Do you make them a project or do you make them a friend? God is calling us to walk together as people, and God will do the rest.”

Part of a tour

The reForming Relationships art tour began in October 2011 in Saskatoon, and has travelled across Canada since. It is part of the Christian Reformed Church’s Aboriginal Ministry in Canada.

The show will continue at First CRC until September 24, then move to Cornerstone CRC in Chilliwack from September 27 to October 21.