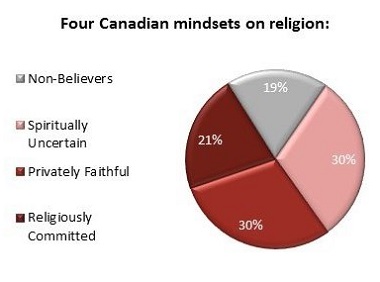 New York Times columnist Ross Douthat made a plea April 15 “that many of this newspaper’s secular liberal readers should head en masse to church.” The conservative Catholic (who delivered the Laing Lectures at Regent College in 2014) urged them to return in Save the Mainline:

Do it for your political philosophy: More religion would make liberalism more intellectually coherent (the “created” in “created equal” is there for a reason), more politically effective, more rooted in its own history, less of a congerie of suspicious “allies” and more of an actual fraternity.

Do it for your friends and neighbors, town and cities: Thriving congregations have spillover effects that even anti-Trump marches can’t match.

Do it for your family: Church is good for health and happiness, it’s a better place to meet a mate than Tinder, and even its most modernized form is still an ark of memory, a link between the living and the dead.

Many religious Canadians might have had similar thoughts as they perused some recent poll results:

A study released April 13 in the National Post is the first installment in a year-long partnership between the Angus Reid Institute and Faith in Canada 150. The headline tells the story: Canadians may be vacating the pews but they are keeping the faith: poll.

Following are the key findings, according to the study:

Not surprisingly, BC was found to be not the most religious of provinces:

The most devout religious followers in Canada are more likely to be found in the prairies. Approximately three-in-ten from Saskatchewan (32%), Alberta (29%) or Manitoba (28%) fit into this end of the spectrum as Religiously Committed. By contrast, 14 percent of Quebec residents and 19 percent of British Columbians can say the same.

For their part, Quebecers are most likely to be found in the middle segments. Two-thirds of Quebecers fit the two middle categories (68%), the largest such grouping in the country. BC is home to the highest proportion of Non-Believers at just over one-quarter (27%) and is second only to Quebec in Spiritual Uncertainty (33%).

Go here for the report.
Ray Pennings, executive vice president of Cardus, which oversees the Faith in Canada 150 initiative, wrote an opinion piece April 13 in the National Post, responding to the polling: It is time to change the narrative around religion in Canada.
Here is a portion of his column:
The numbers present a clear picture: Religiously committed Canadians tend to be the most concerned about others, the happiest and most generous. So, why do Canadians have a negative view of religion? Arguably, the story of faith in Canada is not being well told. The narrative around faith is often negative. Religion is frequently presented as something that divides rather than unites people within communities.
Pennings noted that Faith in Canada 150 exists “to showcase the role of faith in making Canada the country that it is.”
Mainstreet Research: Religion and Education
Douglas Todd reported on two Mainstreet Research polls carried out for Postmedia News last week. The first article was BC voters open to meditation and Christian prayers in school: poll.
Here are some of the highlights, as pointed out in his article:

• The poll found 45 percent of British Columbians oppose even partly funding private schools, whether they’re religious or not.

• British Columbians were mixed on many spiritual issues, with 42 percent believing “mindfulness meditation should be allowed in public schools.” Just 35 percent opposed the meditative practice which teachers are increasingly teaching their public school students. It is linked most strongly with Buddhist and Hindu spirituality.

• Though the Lord’s Prayer was banned five decades ago from BC public schools, 39 percent of British Columbians believe Christian prayers should be allowed in schools, while roughly the same proportion were opposed.

• A firm two of three British Columbians reject Muslim ceremonies and prayers in public schools. The only group that backed Islamic prayers in schools were BC. Muslims, by a whopping 89 percent margin.

The BC Education Act requires public schools to be “secular” and not favour one religion over another. 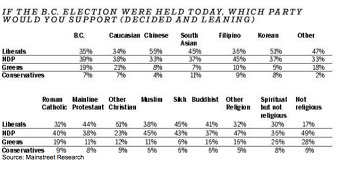 Todd also reported on another Mainstreet Research opinion poll for Postmedia News which reveals the leanings of BC voters based on their religion or lack of it, and ethnicity.
BC election 2017: Religion and ethnicity strongly shape choices, poll finds starts out this way:

Evangelical Christians [who make up most of those in the “other Christian” category] are leaning strongly toward the BC Liberals in the next election.

The large numbers of British Columbians who say they are “not religious” are far more likely to opt for the front-running NDP, with some favouring the Greens.

And Metro Vancouver’s large Sikh population is on track to split its votes between the Liberals and NDP, at the same time as they join other visible minorities in rejecting the Green party. . . .