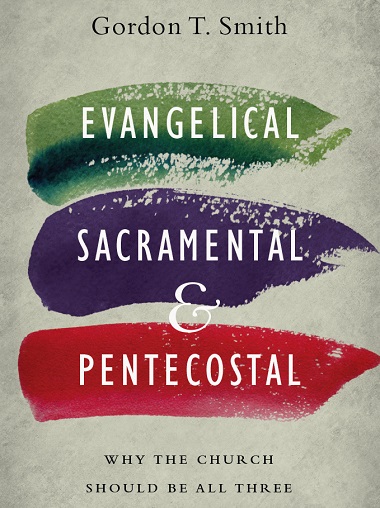 The following is an excerpt from the introduction to Evangelical, Sacramental & Pentecostal by Gordon T. Smith, who is president of Ambrose University and Seminary in Calgary. He is also an ordained minister with the Christian and Missionary Alliance and a teaching fellow at Regent College.

I grew up in Latin America, in Ecuador. For my teen years, I worshiped with my family at the Templo Evangelico Alianza, on the corner of Quito Street and Avenida Primera de Mayo in Guayaquil. The church was founded in 1915 and reflects a century of evangelical missionary presence in Ecuador.

The pastor who baptized me in that church was the Rev. Miguel Lecaro Tobar. The church was very definitely located, theologically and spiritually, as not sacramental; my baptism, however meaningful, was as much about what it did not mean rather than what it might mean.

Pastor Lecaro insisted that this was not a sacrament, not a means of grace in itself. And the church was also very clear that we were not pentecostal or charismatic. This was an evangelical church, meaning that the heart and soul of worship was the Word preached, and Pastor Lecaro was quintessentially a preacher.

My evangelical heritage typically assumed that one had to choose: evangelical meant that you rejected the sacramentalism of not only the Catholic Church but any Protestant church that even seemed to hint at the possibility that the sacramental rites were a means of grace.

Further, evangelical meant “not pentecostal” in the sense that we were very much a people of the Scriptures – read, preached, studied – and that as such we were suspicious of any kind of experience of a spirit or the Spirit that was not directly mediated through the Scriptures.

Tension between evangelicals and pentecostals actually came to a head during the second Lausanne Congress on World Evangelism in Manila in 1989, with many Pentecostals actually threatening to leave the conference. With gratitude we need to recognize the huge role that Professor James Packer [of Regent College] played in that congress, assuring those present that we are all called,to quote the Pauline line that Packer uses for a book title, to “keep in step with the Spirit.”

But do we need to choose? Or can we be pentecostal, evangelical and sacramental? Indeed, I wonder if we need to be, if in fact we want to appropriate as fully as possible the grace of the ascended Christ.

In 1953 Lesslie Newbigin published one of the most important books on ecclesiology written in the twentieth century, The Household of God. Ordained with the Church of Scotland, he was writing from Madurai, India, where he served as bishop of the Church of South India. And as many have noted, his unique vantage point from both East and West enhanced his already astute theological insight into the nature of the church, or what it means to be the people of God.

While I am going to use different language in the chapters that follow, I am indebted to Newbigin for the fundamental insight that there are three distinct angles by which we might consider and live in the grace of the ascended Christ.

We do not need to choose one of them. Indeed, perhaps it is imperative that we not choose but actually embrace and engage each as the necessary counterpart of the other. In other words, not only is it not necessary to choose, it is crucial that we learn how each is an essential means in dynamic interplay with the other, by which we appropriate the grace of God.

This consideration of these three angles or perspectives suggests that there is an ecology of grace – a dynamic, a kind of eco-system, with distinctive contours that brings us to an appreciation of the very way that grace functions, with a generative counterpoint between Word, sacrament and the immediate presence of the Spirit, with each known and experienced in the fullness of grace precisely because this is how grace works.

Gordon Smith is a regular visitor to Metro Vancouver. Over the next couple of months he will be participating in at least these three events:

* Vocation, Work, Career: Navigating the Transitions and Asking the Right Questions, May 6 at Tenth Church

* Being Christian in a Secular Society, June 7 at Regent College

* Project 17:21 Conference: Catholics & Evangelicals: What Can We Learn From Each Other?, June 10 at Christ Covenant Church, Langley

← Polls: Faith outside church, religion and education, BC election
Kitsilano church building gets a new lease on life →