When Pope Francis visited Myanmar (Burma) earlier this week, most of the world’s attention was focused on whether he would refer to the nation’s persecution of its Rohingya people.

He did not, as the CBC’s National Today pointed out November 28:

The Pope’s advisors . . . reportedly counselled against the use of the word “Rohingya,” for fear it would set off an anti-Christian backlash across the majority-Buddhist nation.

The concerns are real. Christians, who make up about six per cent of the Myanmar’s population, according to a 2014 census, have also been the target of ethnic and religious violence in recent years.

A long-running conflict in the northern state of Kachin, where the Christian majority have been seeking independence since the early 1960s, has displaced more than 120,000 people. A report produced last year by the U.S. Commission on International Religious Freedom, an independent bipartisan federal government commission, documented numerous human rights abuses.

Some criticized the Pope for not referring to the Rohingya directly, but the government did announce while he was there that there will be a conference on peace with its ethnic minorities in late January.

Following are two articles from World Watch Monitor, giving background on some of the Christian minority groups (which have been almost entirely overlooked while the world has been focused on the atrocities committed against the Muslim Rohingya people). Pope Francis met Kachin and Karen people while in Burma.

Pope Francis landed in Myanmar November 27 to start his six-day visit to Southeast Asia, raising the hopes of Christians there that he will address the issues they face in the majority-Buddhist nation.

Among those welcoming the Pontiff in Yangon were more than 7,000 ethnic Kachin from the conflict-torn state in northern Myanmar, who had travelled down for the occasion, according to Catholic news agency UCAN.

The predominantly Christian Kachin, together with the Karen ethnic minority, live in conflict zones along the country’s borders and have faced years of government oppression.

John Hong Khong, from Kachin, told UCAN they expected “to get peace through the Pope’s visit as we believe he will raise peace issues and push the country’s leaders for ending ethnic conflicts.”

Leading up to the visit, Myanmar’s Catholic Cardinal Bo said he hoped Pope Francis’ trip would “help heal the wounds of his country, especially for minorities under attack,” adding that the “Rohingya situation is a great tragedy [but] the country needs healing on various fronts.” 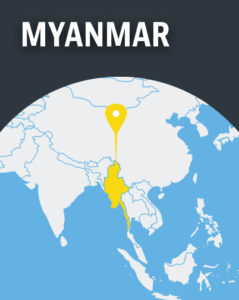 During his three days in Myanmar, the Pope visited the current and former capitals, Nay Pyi Taw and Yangon, and met, among others, the country’s leader – in all but title – Aung San Suu Kyi.

The Nobel Prize winner has come under pressure in recent months because of her handling of the Rohingya crisis. Since August more than 600,000 people belonging to the Rohingya Muslim minority have fled into neighbouring Bangladesh following attacks by the army which, according to the UN, amount to “ethnic cleansing”.

In October two Kachin Baptist pastors who helped a journalist to photograph a Catholic church, apparently bombed by Myanmar’s army in 2016, were sentenced to two years in prison for their alleged support of the Kachin Independence Army.

Relationships between the Kachin and the military are strained not only by the conflict, but also by slow progress in identifying and prosecuting perpetrators of the many documented cases of sexual abuse by Myanmar troops in the region. Two Kachin Baptist women teachers were raped and murdered in February 2015, and no-one has ever been tried or convicted for their deaths.

During a visit to the UK parliament in 2016, Cardinal Bo said: “The majority of the Kachin, Chin . . . and a significant proportion of the Karen, are Christians – and over the decades of armed conflict, the military has turned religion into a tool of oppression.

In Karen, Christians have also been threatened by a spate of Buddhist nationalists illegally building pagodas on church grounds.

“Christianity is viewed by many as a colonial belief after the country was ruled by the British for a century until its independence in 1948. Likewise, the separation of church and state is considered a foreign imposition,” according to AP journalist Julhas Alam.

Around one-sixth of Myanmar’s Christians, who altogether account for around six percent of the population, are Catholics. According to Rev. Mariano Soe Naing, a spokesman for Myanmar’s Bishops’ Conference, “there are always challenges to stand up as Catholic and to have strong faith here,” and pressure comes in many different forms.

“To be honest, if you are a Christian in this country, you will never get promoted,” Rev. Mariano said. “There are no Catholics in the government administration or in any significant leadership positions.” According to Benedict Rogers, a human rights activist, Myanmar has seen a “significant rise of religious intolerance, which has come from within society, although there’s evidence . . . that if not the military as a whole, then elements of the military-backed political parties are also involved in this.”

An example is the extremist Buddhist movement called Ma Ba Tha (Committee for the Protection of Race and Religion) which – so far – has mostly targeted Muslim groups in the country through hate speech, but this “has a knock-on effect on Christians as well,” Rogers says.

“Ma Ba Tha is not just anti-Muslim, it is Buddhist nationalist, so Christians could come increasingly into its focus,” according to Thomas Muller, analyst for the World Watch Research unit of Christian charity Open Doors.

A census, conducted in 2014, showed a rise in the number of Christians (6.2 percent from 4.9 percent in 1983) and a fall in the popularity of Buddhism, although 88 percent still identified with the country’s most popular religion. [Muslims make up about 4 percent of the population.]

The delayed release of the census by nearly two years was, some commentators said, to avoid a backlash from nationalists anticipating a sharp rise in non-Buddhist religions, which they feel threaten Myanmar’s Buddhist identity.

Myanmar is 28th on Open Doors’ 2017 World Watch List of the 50 countries where Christians are most under pressure for their faith.

The third ‘Panglong Conference’ has been announced by Myanmar’s government during an official visit by Pope Francis, reports Catholic news agency Fides.

Tabled for the last week in January, it will be the latest in a series of peace negotiations between armed ethnic groups and government forces.

The original Panglong Conference in 1947 brought together Shan, Kachin and Chin leaders with the then head of state, Aung San, the father of current leader Aung San Suu Kyi. The conference unanimously decided to join a united Burma following its independence from Britain.

Decades of conflict followed the original meeting, and at its second iteration in 2016, dubbed the ‘21st Century Panglong’, peace talks were inconclusive despite being well attended by ethnic groups, including representatives from the mostly Christian Kachin and Karen.

Myanmar’s Christians had expressed hope that the Pope’s visit would help bring an end to ethnic conflict in the country. In his first public address he told government representatives, including Aung San Suu Kyi, that healing the wounds of their civil conflict “must be a paramount political and spiritual priority”.

However, during a meeting at the residence of the Catholic Cardinal Charles Bo, the chief of Myanmar’s army, General Min Aung, told Pope Francis that “there is no religious and ethnic discrimination in the country”. By contrast, Cardinal Bo told the UK parliament in 2016 that “the military has turned religion into a tool of oppression”.

The aim of the January peace talks is to find a framework agreement for all armed minorities and so establish peace in the country, reported Fides. The talks will be attended by Christian and Muslim minorities, including leaders representing the Rohingya people.

1. Good numbers of Karen Christians have immigrated to Metro Vancouver, especially Langley, often after spending a decade or more in refugee camps on the Thai/Myanmar border. Go here and here to read a couple of accounts about their experience.
2. I recently wrote a brief introduction to Greg Toews (Partners Canada) and his work with the Rohingya – and refugees from Myanmar in general.
3. Yasmin Ullah is a young woman who grew up in Rakhine State (home of the Rohingya) and now lives in Metro Vancouver. She is a passionate advocate for her people and is raising funds and support for them. Read something of her story here.

← Mayor met with faith leaders in battle against homelessness
Introducing Social Cities: Religion and the Good of the City →