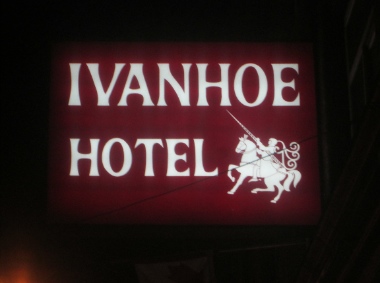 Claudia Launhardt owns the Ivanhoe Hotel with her husband, but she also teaches anthropology at TWU.

A part-time anthropology instructor at Trinity Western University, Claudia Launhardt has thought a great deal about her purpose as a professor, and it’s not just to impart knowledge. “My mandate is to equip students for the world,” she says.

Anthropology is the study of people, so it’s no surprise that Launhardt has also thought much about her own role as a person – and as a Christian. “As humans we can do great things,” she explains. “I can be this glorious, sparkling academic. But without Christ – without love – I am nothing.”

She expresses this love toward her students and her fellow human beings, including the approximately 100 souls who live at the Ivanhoe Hotel, a business she runs with her husband Nasser in Vancouver’s Downtown Eastside (DTES). Widely known as one of this country’s poorest neighbourhoods, financial poverty is merely the tip of an iceberg of impoverishment that constitutes life here, where social ills such as homelessness, addiction, prostitution and mental illness are the norm. 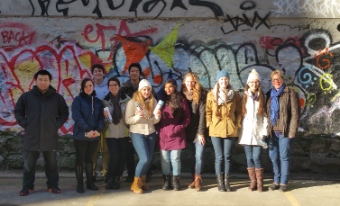 Claudia Launhardt (right) with her students in the Downtown Eastside late last year.

A single-room occupancy hotel, the Ivanhoe houses long-term residents, people living at society’s margins, in danger of “falling off the cliff,” Launhardt says.

“Many people come from the streets . . . just released from prison, coming out of homelessness or rehab facilities.” To her, the Ivanhoe represents not only a business, but a God-given mission field.

The contrast between her two working worlds – the Ivanhoe Hotel and Trinity Western University, in Langley – could not be more stark. Many of her tenants are young adults, as are most of her students. Troubled by the discrepancies in the lives of the two groups, Launhardt “prayed and asked the Lord what to do.” The answer came in the form of an idea.

“I thought, why not combine these two worlds?”

That’s just what she did, making field research a mandatory part of her courses. Her students visit the Ivanhoe – for a weekend or up to a week at a time – and volunteer with local social service agencies while they conduct their research.

Launhardt is convinced that working with people on the margins is far superior to working for them, that her students will be better equipped by their DTES experience for whatever mission field God eventually calls them to, than by “writing a multiple choice midterm exam.” And she takes steps to ensure their research is put to good use.

Laura Klassen took Launhardt’s Anthropology 101 course in 2011 as part of her third-year studies toward a bachelor of fine arts degree. She says her three-day field trip to the Ivanhoe “lit a fire” in her, and calls the experience “a catalyst for amazing things to come.”

Klassen met with city officials to present her class research project on the gentrification of the DTES, and participated in conversations on the need for automated public toilets in the area. Now a graduate, Klassen helps run a creative arts program in the DTES through Youth Unlimited.

Launhardt has become something of a mentor to her, Klassen says. “She’s an amazing woman. The way she lives her life and through her teaching, it’s just making the community so much stronger.”

This article is re-posted by permission from the March/April 2016 issue of Faith Today.

← Care, not killing: The most excellent way
Peacemeal’s creative story-telling got through to one ‘church leaver’ →