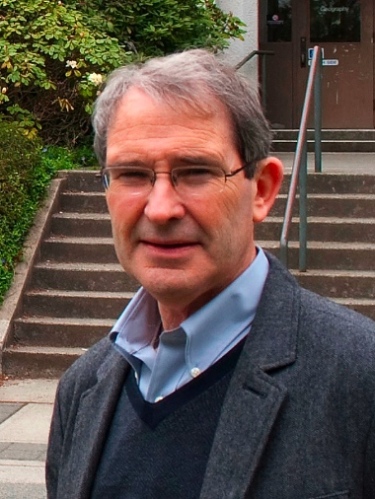 David Ley is a geography professor at UBC; his current research involves a comparative study of housing market bubbles in five global cities: their causes, social consequences and policy responses.

On September 24 at 7 pm, Regent College will host the first ever Q Commons event in Vancouver. The evening will include presentations by local leaders and thinkers on the topic of housing, home, community and belonging in the city of Vancouver.

David Ley, one of the presenters, is a professor of geography at UBC and has been studying international housing market bubbles. Ceri Rees of Regent College asked David a few questions about the talk he’ll deliver. For more information about Q Commons and to buy tickets, go here.

Ceri Rees: Tell us more about the title of your talk, ‘Housing Affordability: A Sign of the Times.’

David Ley: The ‘sign of the times’ is growing inequality. A globalized world of almost unrestricted capital flows leads to asset bubbles, and property has become a very significant asset bubble. But not everywhere, only in selected places.

There was an Angus Reid study that came out in the spring, asking people in this region what are the most important urban issues they can identify. And housing emerged first. So that sort of launches that housing is a very important issue here.

The study also very usefully went on to identify four response groups in terms of how serious their housing circumstances were. One of the groups was “very uncomfortable” and “stressed” – those who are paying a high proportion [of their income] on housing, who typically have a long commute, who are younger people, who have a family with children, who are the most highly educated of the four groups.

And now here is the clincher . . . 80 percent of whom are seriously considering leaving this region because of the cost of owning a home.

CR: What are some of the reasons why housing prices have skyrocketed in Vancouver?

DL: The problem does not have a local cause because local incomes cannot support the housing market that we encounter here.

The role of wealth migration in shaping our housing market is significant: 200,000 people have come to Vancouver through business immigration programs in the last generation. All of those households are millionaire households – that’s how you qualified for the program. This has led to an enormous dump of wealth on the local housing market.

CR: What can we do about this?

DL: The answers have to be political answers. The scale of the challenge is so great. Individual Christian action can [only] nibble around the edges. In my neighbourhood, for example, the United Church is planning a significant redevelopment of its site, which will include putting in rental housing and subsidized housing, so even to be building rental housing is a movement for social justice in this environment. It is the mainline churches that tend to be most active in doing these sorts of things.

But not even at the scale of the city government can one really address these questions. It needs a concerted effort by all three levels of government. And we are a long, long way from that in Canada. We don’t even have a national housing plan. In fact, we have very few national housing policies.

In the eighties, there were about 30 national housing policies in Canada. Now, there are two. One of them is native housing, and the other is mortgage insurance. But the actual building of housing disappeared in a Liberal budget in 1993.

One of the very interesting issues is what will happen now that the business immigration program has been ended by the federal government. Will that in fact choke some of the investor activity? In the next year or so we should be beginning to see that. But until now, there’s been no effect at all.

CR: What is the knock-on impact of affordability of housing on our shared life together?

The obvious things are what we all know from our own experience or the experience of people we know in terms of housing stress. How do people adjust to a market like this? We have a 27 year old and his family living in our house. We’re delighted – I’m a great believer in extended family gatherings. So that’s one adjustment.

People move away, as this Angus Reid poll suggests. People double up. People live in smaller units. People take on very risky debt loads. There are illegal suites throughout the region that are absolutely critical not only for people’s housing but as mortgage helpers.

Some of the less obvious effects are quite interesting. What is the implication for family formation when such an incredible amount of daily life has to be put over to earn money to pay housing bills? Poorer people will take on two jobs. What are the consequences of that amount of work, for family life, even for individual well-being? That’s one set of questions.

The other set of questions has to do with housing as asset. Housing is the family’s wealth creation plan, especially in a world where private pensions are being significantly eroded. There is more insecurity and the home becomes much more important in family wealth generation. One colleague in the UK writes of the home as a “private bank” – people will use their equity in their home to take out loans to do things. They think of their home as their retirement nest egg.

My basic argument is that housing is becoming one of the central questions of our time. It’s like a nexus around which a whole lot of other issues unfold. Vancouver is a particularly good laboratory to look at this because the issues are so fraught here.

CR: Is there any hope in all of this?

DL: The hope depends on the resilience of individuals to navigate a path through a very challenging environment. There are a lot of adjustments people make.

The other trend is families passing on funds to their children. The ‘bank of mom and dad’ is the way it’s often talked about. A number of kids are getting into small condos in the city through the bank of mom and dad. It does require resilience. It is one of life’s big challenges, which isn’t to say people can’t crack it.

CR: So there really needs to be a sense of call and commitment to Vancouver as a place of home.

That’s quite right. You absolutely need to know that this is where you should be. Because if not, why go through all of that?

David Ley is a professor of geography at the University of British Columbia and author of Millionaire Migrants: Trans-Pacific Life Lines. His current research involves a comparative study of housing market bubbles in five global cities: their causes, social consequences and policy responses.

Q Commons, an event organized by Q Ideas based in New York City, convenes local leaders to think, learn and work together on common topics and issues in our cities.

The other local speakers are Karen Reed, who works as a community builder in East Vancouver; Omar Dominguez, director of operations and sustainability for Happy City; and May So, an associate at Henriquez Partners Architects.

There will also be talks by speakers broadcast from New York: Os Guinness on ‘Getting Along, Despite Differences’ and Dr. Caroline Leaf on ‘Mental Health.’

← Judge says “no” to grandparents who want to take their grandchild to church
Election 2015: End of life and justice issues are key for Christian groups →