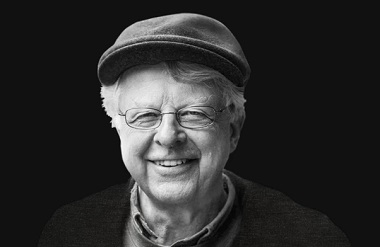 The text message on February 4 was devastating but long-expected: “I just found out our beloved Ray Bakke has gone to be with Jesus. What a giant and a gem and a gift from the LORD he was to the Church . . . and to us!”

Ray had been battling cancer for months, his diagnosis coming shortly before his wife, Corean (a noted concert pianist and liturgist), herself succumbed to a years-long decline from aphasia.

Ray’s passing was great gain for him, and a greater loss to the church than most leaders under 50 would know.

It’s rare now for me to meet a pastor or urban worker who has heard of him. But it’s fair to say that no one did more than Ray to turn the hearts and heads of white evangelicals back to the inner city, to take the global phenomenon of urbanization seriously as integral to the arc of God’s redemptive activity in history.

And arguably no one in his generation – the height of his ministry was from the mid 1970s to the late 1990s – did more to connect the diversity of the church across denominational, international and ethnic boundaries in pursuit of the holistic Gospel of Jesus that prioritizes the disadvantaged.

Obituaries by Christianity Today and Northern Seminary can only hint at the extent and variety of impact Ray had across the world. The best I can do here is offer some personal memories which I hope will encourage you to explore his writing and missional practices.

I first met Ray through reading his two best known books. In 1997 I moved from a rural-suburban upbringing in the US Midwest to cosmopolitan Vancouver to attend Regent College, expecting to move on quickly to the UK for doctoral work in biblical studies.

To my astonishment, within mere weeks this country boy fell head over heals in love with the city. I knew the trajectory of my life had changed. But I had no idea how to integrate this new passion with my simultaneously emerging sense of ‘churchy’ vocation.

That same year, Ray published A Theology as Big as the City. In 26 short chapters, he romps through the entire Bible, highlighting how each book not only speaks to pressing current urban challenges but also reveals God’s love for cities as places and urban life as profoundly good: the Bible begins in a garden and ends in a Garden City.

Building cities after God’s own heart is the quintessential spiritual discipline. Here Ray writes the book he looked for in vain when he was a new seminary graduate tasked with pastoring a multi-ethnic congregation in south Chicago in the 1960s. It was just what I needed!

Less than 18 months later, I was attending Grandview Calvary Baptist Church in east Vancouver and volunteering with their weekly meal and overnight shelter, impressed with how this tiny congregation was coming back to life through boldly, creatively experimenting with urban mission.

I discovered that Ray was a key influence for them too, as Pastor Tim Dickau took to heart the stories and practical advice Ray related from his own journey in The Urban Christian: Effective Ministry in Today’s Urban World. 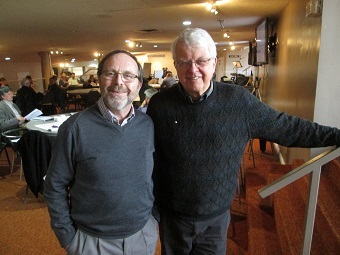 Glenn Smith and Ray Bakke at the Vancouver Consultation in November 2016.

Both books are highly readable distillations of talks repeatedly honed in front of countless audiences by a master communicator. Yet behind the words lies a great deal of first-rate scholarship.

Glenn Smith, retired from decades of leading Christian Direction in Montreal and being the Lausanne Movement’s Senior Associate for Urban Mission, once told me that he never did so much exegesis as he did in Ray’s doctoral courses at Northern Seminary.

“If we’re ever going to convince the fundamentalists to embrace cities and racial reconciliation, we’re going to have to out-Bible them!” Ray loved to say.

In search of urban forebears, Ray did his doctorate in early church history, specializing in the growth of Christianity within Near Eastern cities of the first few centuries after Pentecost. That historian’s perspective grounded him as he went on to investigate and celebrate what God is doing in our time in more than 200 cities around the world.

In his later years, first-time visitors to his and Corean’s home/retreat in the hills east of Bellingham rarely were allowed to leave without first walking the ‘Mission Trail’ he’d worked into the property’s landscape, whereon there were 20 stations commemorating urban saints starting with Barnabas of Cyprus (Paul’s companion in Acts) and ending with Teresa of Calcutta.

Taking encouragement from the many who have gone before us, Ray was primed to expect God in the unlikeliest people and places. For me, one of the most remarkable things about Ray was his insatiable curiosity and obvious delight in learning to see neighbourhoods and cities through the eyes of God’s people of peace (not all of whom are Christian) there.

Somehow he maintained optimism in the face of deep crises and unrelenting systems, in the church as much as in the world. He never failed to return from a trip without good news to share of faithful servants of Christ in surprising roles and social strata.

And he made a point – a career, really – of connecting these far flung folk to each other, helping them to teach and mentor each other and to discern God’s movement together.

Ray did this primarily by convening months-long ‘consultations’ of the whole church (clergy and laity from all segments of the Church and sectors of the city) across an urban region and by pioneering educational programs (and then entire institutions) that formed cohorts of students from multiple schools and continents.

I first met Ray in person in 2003 when City In Focus sponsored him to pitch the idea of a consultation to key leaders here Metro Vancouver; my job for them was to compile an exhaustive database of congregations and ministries.

There had been a poor attempt at one in 1999, and though this gathering also failed to launch one, it nevertheless produced enough energy to let me start CityGate Vancouver under CIF’s umbrella (it’s now a charity in own right, headed by Tim Dickau).

We subsequently brought Ray up several times to keep the idea of a consultation alive. Finally in 2016 Flyn Ritchie and I were privileged with broad sponsorship to spend nine months conducting systematic small group conversations across the City of Vancouver, culminating in a two-day Summit.

Ray and Glenn were advisors to the entire process and keynote speakers at the Summit.

The Summit prompted Regent College to focus on urban mission for its 2017 Pastors Conference, wherein Ray was a keynote, and to have Ray and I teach an Urban Plunge summer course, taking a dozen students to interview practitioners all over Greater Vancouver, reflecting on what we were encountering in light of scripture and Ray’s experiences in other cities.

Ray knew Vancouver well from childhood onward, and he felt our region has global significance as a laboratory for 21st century urban mission. After the 2017 Pastors Conference, he began lobbying the administrations of our local seminaries to form something like the Seminary Consortium of Urban Pastoral Education he founded in Chicago. His vision was for an apprenticeship rather than a mere education: “Look at how doctors are trained!” he kept saying. I couldn’t agree more!

You can get a taste of Ray’s teaching on this YouTube playlist.

Finally, let me leave you with three simple questions Ray kept returning to, which you can use in your daily routines to become better rooted in your neighbourhood and better tuned to God at work around you. 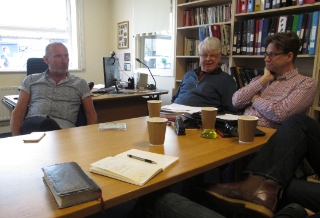 Ray Bakke and Jonathan Bird (right) with Andy Hawthorne, leader of The Message Trust, in Manchester in the spring of 2016.

Ask yourself and the people you encounter – on the sidewalk, in the grocery line, at parent-teacher conferences, etc.:

← Around Town: Ashes to Go, St. George arsonist, Com*pli*cit, Will Faber . . .
Crossings: A Journey to Easter →