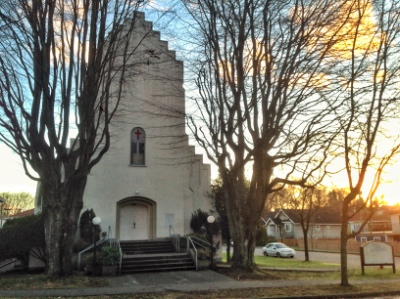 Thanks to a dynamic young congregation and C2C network (an assertive national church planting program – interdenominational, but affiliated with the Mennonite Brethren denomination), a little white stepped gable church at 19th Avenue and Prince Albert in east Vancouver, is receiving a new lease on life.

Dubbed ‘The Chapel’ by Reality Church Vancouver since it moved in earlier this year, the building is now filled with worshipers of many ages and backgrounds twice each Sunday morning.

Lead pastor Kristian Martens and his wife Susie, along with their six young children, live in the Mount Pleasant area of Vancouver, not far from the church. 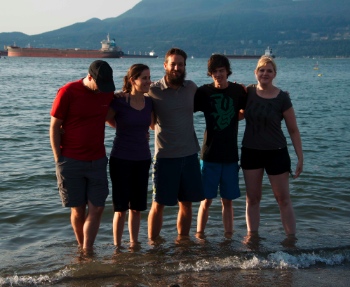 Kristian Martens, centre, with members of his congregation preparing for baptism.

Martens comes originally from the interior of British Columbia and is son of ABC Restaurant founders Carol and the late Ron Martens. He says God “used the illness of my father” to bring him back to his home province, where the Reality Church possibility – in due course – became available.

He describes Reality’s congregation – which was planted in 2009 – as being “socio-economically diverse. There are well-educated people – physicians, lawyers, filmmakers . . . and others who need the kinds of help that such church members can provide.” It is “a gospel-loving Spirit-led kind of group,” just as it advertises on its website. The diversity includes certain sectors of the First Nations youth community, he notes. 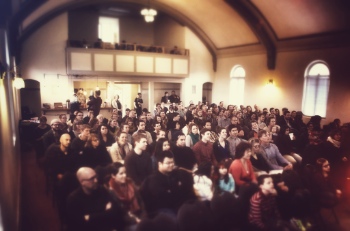 Meeting in The Chapel.

Reality Vancouver is one of dozens of church plants across Canada supported by C2C. Their name is inspired by the inscription etched on the Peace Tower of the Parliament Buildings in Ottawa, taken from Psalm 72:8 – “And He shall have Dominion from Sea to Sea.”

Martens says God showed a “sense of humour” when he provided Reality with a chapel that has been used through the years by such a variety of worshiping groups. He says Reality, which has a six-year lease on the Chapel, is part of the “story of God opening and closing doors” and allowing the congregation to reach into the community. “We have full spiritual authority” he notes, even though the building remains under Anglican ownership.

Reality Church is the fourth congregation to occupy the church since it was built in 1937 as home to Vancouver’s Danish Lutheran Church. Its unique stepped gable architecture with red tile roof was traditional to the Danes, originating during a religious revival in the 11th century; hundreds of similarly styled churches still dot the Denmark countryside.

In 1984, the Danish Lutherans built a similar but larger church in Central Burnaby (close to Dania seniors residences where many Danes live.) They sold the 19th Avenue building to the Anglicans to accommodate their growing Church of the Good Shepherd congregation. Good Shepherd met there until 2004, when continued growth led to a unique and complex property swap that led the Chinese Anglicans to the commodious Metropolitan Tabernacle at 11th Avenue and Columbia Street in Mount Pleasant.

In turn, the former Met Tab congregation – then in decline after the glory years of the 1940s to 1960s, under the pack-em-in preaching of a Scots Spurgeon-like preacher named W.M. Robertson – moved to the 19th Avenue church.

(I remember hearing Robertson during his later years, when he would thunder away about “being steadfast, unmoooveable, always abooounding in the werrrrk of the Lorrrrd.”)

Robertson, after his death, was followed by several very good preachers including Ian Campbell and Robert Bahr, but the decline of the aging membership led the church to focus on a neighborhood approach. The property swap with the Anglicans was ideal. Met Tab was renamed 19th Avenue Christian Fellowship and the church remained active in that location until a new collaborative ministry opportunity occurred last year.

That opportunity came out of talks with the historic Ruth Morton Baptist Church, at 27th Avenue and Prince Albert – located just a few blocks south of the former Danish/Chinese/Met church. 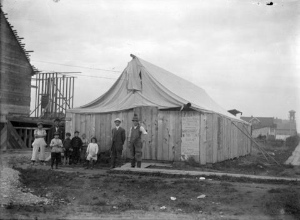 Ruth Morton, built 101 years ago, was named for the wife of John Morton, one of the Three Greenhorns who had started to carve Vancouver’s West End out of the forests in the 1880s. He was one of the inspirations behind First Baptist Church on Burrard Street.

Ruth Morton, as it happened, was one of the first white women born in south Vancouver, where her namesake church was eventually constructed.When the Baptists went through their early 20th century divisions, paralleling the Presbyterian-United splits, the Morton legacy churches, Ruth Morton and First, ended up in different Baptist camps.

Fast forward to last year. Ruth Morton, increasingly an international congregation, was finding common ground with 19th Avenue. So they have come together, meeting in the Ruth Morton building and worshiping under the name of Mountainview Christian Fellowship. The pastoral team consists of Vic Dias, formerly lead pastor at 19th Avenue, and Rika Schell, children’s ministry coordinator.

It was that merger which created a vacancy for Reality Church to fill.

So the historic work of a number of east Vancouver churches continues with resiliency and adaptation in a changing city. Would W.M. Robertson be pleased? Well, if ‘always abounding’ can be interpreted as ‘always bouncing back,’ he will undoubtedly be quite happy, in a dour Scottish sort of way.