Forming any sort of abiding face to face community is becoming rarer in our culture. Robert Putnam’s classic study Bowling Alone charts the accelerating demise of participation in community groups and associations from the years 1960 – 2000.[1] There are multiple factors for these movements within the North American context; the introduction of television and suburban life are two of the primary ones he identifies.

But this move away from community cuts a wider swath across all Western cultures. In his magisterial work on the sources that form our conception of the person, Charles Taylor presents a genealogy through the broad sweep of human history observing how humans in Western cultures have moved from a corporate identity into a predominately individualistic identity.[2]

Within this broad shift to a hyper-individualism, there is a toxic blend of forces that contribute to the decline in community. We can easily construct a long list in addition to the forces Putnam names such as television viewing, internet surfing and suburban isolation.

The list could include family dissolution, planned obsolescence and the restless desire consumerism fosters, secularism and the disintegration of common worldviews, the mobility required by capitalism, and growing social inequality, isolation and fear.

The kind of uncertainty and fears of the future that haunt men and women in the fluid, perpetually changing social environment . . . does not unite the sufferers: it splits them and sets them apart. The pains it causes to the individuals do not add up to a kind of ‘common cause,’ which could be pursued more effectively by joining forces and acting in unison. The decline of community is in this sense self-perpetuating; once it takes off, there are fewer and fewer stimuli to stem the disintegration of human bonds and to tie again what has been torn apart.[3]

Yet that is not the whole story. Disturbed by the forces that divide, such as individualism and consumerism, many folks are longing to counteract these powers and forge a new way of being the church.

Over the past 30 years, as I have pastored our urban church on the northwest edge of this continent, I have discovered that people from radically different backgrounds share this in common: they are tired of being isolated and are longing for community.

Despite the pull within us towards autonomy, the longing for a shared life has kept pulling us together. The movement from isolation to community towards radical hospitality has been the primary trajectory of our church.

Building a theology of community

a.  Ontology of God

Isolation and alienation rub up against the grain of the divine image in which we are created. John Zizioulas argues persuasively from the model of the trinitarian divine life of communion that community and relationship is at the heart of God and at the heart of personhood.[4]

Miroslav Volf notes that God’s hospitality reaches even to those hostile to him, overcoming the fear and hatred which dismantle community: “God’s reception of hostile humanity into divine communion is a model for how human beings should relate to the other.[5]

If the church is to become a “hermeneutic of the gospel” as Lesslie Newbigin suggests,[6] then this call to community is integral to the church’s life and witness. Isolated Christianity is an oxymoron.

b. Story of scripture

It is into this culture of isolation that the gospel of Jesus Christ announces that God calls us from our isolation into community. Throughout the narrative of scripture, the forming of a community for the sake of the world is at the heart of God’s vision.[8]

In response to the ravages of evil in God`s good creation, the divine One forms a people who will be a healing light to the world and bear his image.

After the exile and an incomplete return from exile, Jesus forms a community of 12 itinerant disciples, a symbolically renewed Israel, to complete this mission. He also leaves behind small groups in the villages he visits, calling them to implement his way of being the people of God, and promising that his presence will abide wherever two or three are gathered in his name (Matthew 18:20).

Paul forms churches of Jews and Gentiles, male and female, slave and free as signs of God`s reconciling work in the world. The apostle Peter, writing to foreigners, slaves and women – people who were marginalized in that society – declares to them that they have become part of a holy people, chosen by God: “Once you were not a people but now you are God’s people; once you had not received mercy, but now you have received mercy” (1 Peter 2:10).[9]

Vatican II speaks about three types of Christian community: Family / household, the parish church and religious orders. These basic forms are interconnected as each serves to bless and augment the other (while on their own, each has the potential to become idolatrous).

Yet building Christian community is not only building up families or the gathered life of the church. There are many other forms of community for us to build, from a sense of team in the workplace to neighbourhood associations, to politically organizing groups aimed at systemic change. The purpose of God to reconcile us to God, to one another and to the creation itself means that the formation of community is at the heart of our human vocation.

Indeed, in an age where civil society is shrinking, the church and people of faith have a unique opportunity to enter the “structural space” that Jurgen Habermas defines as being between the individual and the dominant institutions of the market and the state. If we do, we can take up that mediating influence that is so vital to the well-being of society.

d.  History of the church

I believe that we urgently need fresh experimentation in forming and sustaining churches and communities that persevere in love amidst disagreement and forgive one another, communities that have a much thicker shared life than most of our churches today, churches that experiment again with the sermon on the mount, and the way of Jesus.

If we don’t, we will be easy pawns for co-option into our individualist consumer culture and a pale hermeneutic of the gospel. Fortunately, we have a rich history to draw upon in forming these contrast communities, from the early church, to the Benedictines, to the Anabaptists, to the Moravians and Wesleyans, to the new monastic communities in our day.

I do believe that we must mine those resources and  experiment afresh in developing thicker communities that take up common practices arising out of the gospel.

One of the reasons that we need to develop thicker communities with a deeper shared life is that our life together is one of the primary ways in which the Spirit forms us or reforms us into the image of God.

In his letters to the churches, Paul repeatedly uses one-another sayings to describe how the people are to relate to one another. The rough and tumble relationships of  followers of Jesus living side by side is the context for the formation and transformation of humans.

As we take up the common practices Paul describes – such as love, forgiveness, humility, rejoicing, forbearance, celebration, service, compassion and truth-telling – the Spirit reveals the false self that is to be put to death in order that the true self being renewed in the likeness of our creator might come to life.

Living in community and being the church together over the long haul have been the laboratory in which the Spirit’s work of transformation has taken hold among us.

Key to this formation is the distinction between personhood and autonomy.

While autonomy of a sort is valuable, our evolving notions of freedom as expanding autonomy over all spheres of life make community very difficult.

Personhood, on the other, denotes the importance of differentiating ourselves from one another so that we can enter into healthy interdependent relationships. A well-differentiated personhood is key to forming healthy families, households, communities, workplaces and neighbourhoods.

f. Recovery of a theology of place

Walter Brueggemann aptly describes what happens when people live hospitably in a place:

Place is space which has historical meanings, where some things have happened which are now remembered and which provide continuity and identity across generations. Place is space in which important words have been spoken, which have established identity, defined vocation and envisioned destiny.[10]

If we are to overcome the fragmentation of contemporary life, if we are to form communities that seek the fullness of God`s kingdom, including the stewardship of creation within our cities, we need to recover an understanding of how God is restoring and redeeming places.

We need very local communities within neighbourhoods who ask what this restorative work means for our care of public buildings, trees, sidewalks, church buildings and houses. When you inhabit and embrace a place over the long haul, the descriptions of shalom found in scripture – a culture in which humans flourish, relationships are restored and creation moves towards completion – become more imaginable.

For our church, inhabiting a neighbourhood has meant experiencing a number of beneficial outcomes, including the natural intersection of people in daily life, the development of community muscle, increased cooperation with other churches and neighbourhood groups, and the recovery of a love of place.

By recovering a theology of place, we have gained peepholes into God’s kingdom vision of a world of beauty, justice, relationships and spiritual vitality. 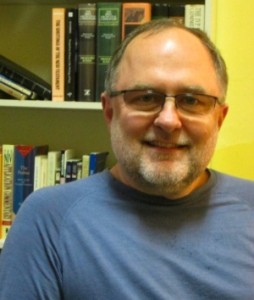 Tim Dickau has been the senior pastor at Grandview Calvary Baptist Church in Vancouver for more than two decades. Under his leadership, the church has focused on becoming an intentional community and on developing creative responses as a church to the needs of the neighbourhood. Several community ministries have grown up within Grandview, including Kinbrace, JustWork, REED (Resist Exploitation Embrace Dignity), Co:Here and Out of the Cold. Dickau wrote Plunging into the Kingdom Way in 2011.

This comment is re-posted by permission from the Grandview Calvary Baptist blog.

Grandview is in the process of developing a lay order. For more background on that initiative go here and here.

[1]  Putnam, Bowling Alone, 65-78.
[2]  Taylor, Sources of the Self. This movement towards individualism does not mean that these periods of history were by nature more compassionate or virtuous but that people situated their identity more firmly within a communal context. Nor does this imply that this is an entirely negative move; one only need consider the gains in human rights during the past two centuries as one example of a positive resulting from this trend towards individualism.
[3] Baumann, Community, 48.
[4] See John Zizioulas, Being in Communion, (Crestwood, New York: St. Vladamir’s Press, 1985) and Stanley J. Grenz, The Social God and the Relational Self,  (Minneapolis, Minnesota: Fortress Press, 2004), especially p. 332.
[5] Miroslav Volf, Exclusion and Embrace: A Theological Exploration into Identity and Otherness, (Nashville, Tennessee: Abingdon Press, 1996), p. 100.
[6] Newbigin, The Gospel in a Pluralist Society, p. 222.
[7] See Reg Bibby, Fragmented Gods: The Poverty and Potential of Religion in Canada, (Toronto, Ontario: Irwin Publishing, 1987).
[8] N.T. Wright, Evil and the Justice of God,. 47-74.
[9] See John H. Elliott, A Home for the Homeless, 59-88. for a description of the recipients of the Epistle.
[10] Brueggemann, The Land: Place as Gift,  5.

← Katharine Hayhoe: A leading climate scientist, and an evangelical
Turning a blind eye to prostitution →