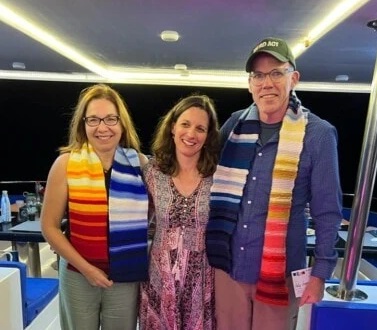 Chiu has written a five-part series of reflections on his time at Sharm el-Sheik, which can be found both on his blog (An Earthkeeper’s Notebook) and the A Rocha Canada site.

Here are some of his thoughts about the participation of Christians at COP27, and his assessment of the event’s significance. Following that are portions of an assessment of the Montreal gathering by A Rocha, and some thoughts from Luke Wilson, CEO of A Rocha Canada, who also attended COP15.

Samuel Chiu: The people I met 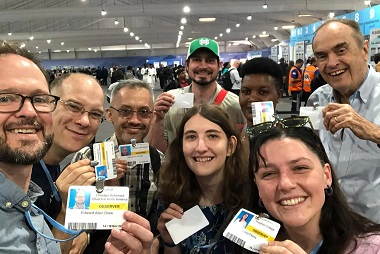 Part of the Week Two cohort of CCOP team, after receiving observer badges at the COP Blue Zone; Samuel is third from left. (Photo: Allen Drew, via CCOP)

I went to COP27 this year as part of the leadership team of the Christian Climate Observers Program (CCOP) – a joint project in which A Rocha Canada is one of the organizing partners.

I served as the de facto ‘registrar’ for the program, processing all the applications and arranging some of the observer badges shared by A Rocha International, an accredited NGO at the UNFCCC.

After receiving an unprecedented number of applications, CCOP managed to accept 27 participants from seven countries, including four from Africa.

Most CCOP participants this year were young college students [including Sarah Demian and Rea Klar from TWU and Rynn Zhang from UBC].

There were also college graduates just starting their careers, along with a university professor, a climate scientist who recently completed her PhD, several community advocates, ministry workers at Christian denominations and mission agencies, and youth workers.

They brought with them Christian convictions, expertise and backgrounds from all walks of life. I was deeply encouraged by the desire of each of them to connect their Christian faith (some ‘young’ in faith and others veterans of ministry leadership) with caring for God’s creation and concerns about the climate crisis. 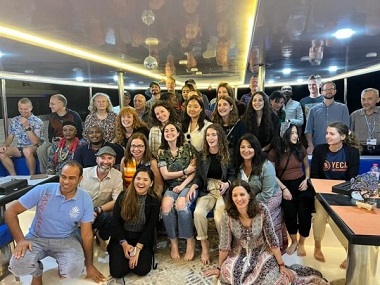 Most of them had been rather lonely on their climate or creation care journeys and were glad to find a new ‘family’ at CCOP. During the two weeks at COP27 they prepared firsthand eyewitness accounts and reports via the program’s daily newsletters.

Some have published articles about their experiences and observations in local newspapers or other platforms while a few have been interviewed by news media.

For many CCOP participants, their participation as an official observer at COP27 represented a new chapter in their climate activism and from this point forward, they belong to a like-minded Christian community of allies and colleagues around the world, empowered by an enriched Christian theological foundation.

As a team, CCOP organized meetings with some extraordinary people at COP27. We arranged a dinner with the leading climate activist Bill McKibben, and the world renowned climate scientist Katharine Hayhoe. What a delight to see our young participants seated in circles, in deep conversation with these legends, drawing on their wisdom while also being heard!

Jane Kelly, a CCOP participant from Australia, brought a couple of dozen scarfs with her, hand-knitted by people in her community in the climate stripes pattern, and presented them to key decision makers and influencers we met, including Al Gore, Nancy Pelosi and Steven Guilbeault (the Canadian Minister of Environment and Climate Change), as a gesture of encouragement from the grassroots of climate action.

We also got the chance to speak with a few scientists in leadership roles. One of them, a confessing Christian, described feeling challenged to explain to colleagues how her faith is the prime motivation for the work she is so passionate about. After only 10 minutes of candid conversation we prayed for her before she rushed off to lead an important panel session.

Then on the last day of COP27 we met with Vanessa Nakate (also here for her Twitter feeds), the founder of Rise Up, an African youth climate movement.  She is also a devoted Christian and she mobilizes tens of thousands of African youth to engage in climate change activism. After sharing some of the challenges she faces we prayed for her on the spot, with her joining us on her knees. I will never forget these scenes!

Go here for the full entry and for links to all five reflections. 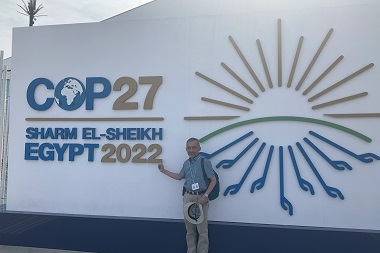 Samuel Chiu felt participation in COP27 was valuable, though the results are mixed.

Along with many others I confess that, overall, I found [COP27] disappointing. I have even heard some government officials make similar statements.

Perhaps, it’s not totally surprising given the convergence of many global crises at the same time: the shadow of the Russian invasion of Ukraine, the energy and food price crises, heightened inflationary pressure in many nations (both rich and impoverished) and the reportedly not-so-efficient presidency of Egypt.

[Only bullet points for the failures and successes are included here; go here for more detail.]

A few of the main failures of COP27:

All that said, the level of disappointment depends on whom you are talking to. To me, the two-week gathering of 33,000 participants was not simply a waste of time.

The following achievements were made:

Go here for the full entry and for links to all five of Chiu’s reflections.

A Rocha: Response to COP15 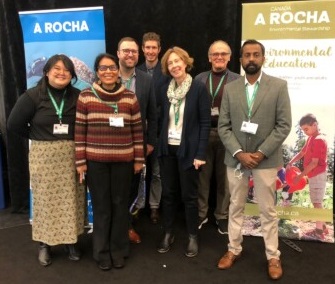 A Rocha team members at COP15 in Montreal. Luke Wilson is third from left.

After a two-year delay and weeks of intensive talks in Montreal, Canada, the long-awaited Post-2020 Global Biodiversity Framework (GBF) was successfully adopted at the CBD COP15.

A Rocha – a worldwide network of Christian organizations for nature conservation, member of the IUCN, and one of the observers in this historical summit – applauds these targets and goals while encouraging prompt and effective implementation.

The GBF targets fulfil four overarching global goals for 2050, which seek to (a) preserve and restore ecosystems and halt human induced extinction of known threatened species, (b) sustainably use biodiversity, (c) fairly and equitably share the benefits of genetic resources, and (d) ensure adequate means of implementing these goals for all parties. 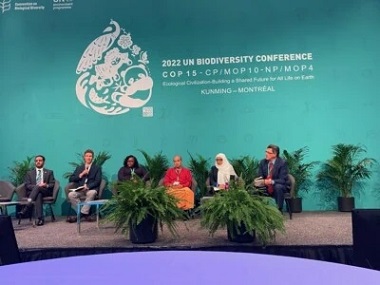 Paul Simonin (second from the left), Conservation Science Director of A Rocha Canada, taking part in a panel discussing ocean conservation and protected areas during COP15.

A Rocha noted these positive highlights from the GBF targets for 2030:

This comment is from the A Rocha Canada site; A Rocha International posted the same positive highlights, but added “several places where the framework falls short.” 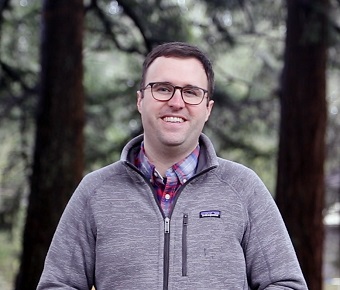 We took advantage of a rare opportunity to participate in COP15 because the events were close to home, and the large number of participants from the Canadian nature conservation community.

I was grateful to meet people from WWF, Nature Canada, Ducks Unlimited and the UN Environmental Program, to name a few.

I turned from skeptic of global environmental gatherings to evangelist when I realized that these gatherings are much more than government negotiations; they are fertile ground for new relationships, ideas and partnerships. When I talked with people, every conversation had an element of hope and anticipation.

The A Rocha comment concluded: “A Rocha celebrates this achievement alongside partners in the World Evangelical Alliance Creation Care Network. A more detailed analysis of the framework will be released in January 2023.”

Go here for the full statement on the A Rocha Canada site.