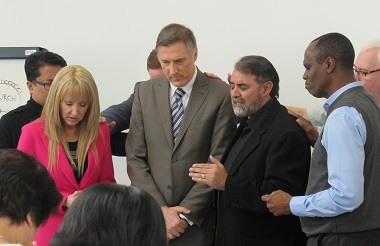 Pastors at the Canada in Crisis event prayed for Maxime Bernier and Laura Lynn Thompson after they each spoke.

Last week I had three opportunities to mull over what it means to be a non-partisan Christian who wants to work for the common good.

I took part in the launch of the Metro Vancouver Alliance’s Faith Caucus February 19 at St. Mary’s Catholic Church in Vancouver.

Two days later I attended a pastors’ forum at Cariboo Road Christian Fellowship in Burnaby: Canada in Crisis: Mobilizing the Church for Action.

Between those two events I received a book written by the recently-retired executive director of Citizens for Public Justice: Journeys to Justice: Reflections on Canadian Christian Activism.

Both events were very positive, even stirring at times, and the book reflects decades of good work. Still, one could not help but reflect on how readily the term non-partisan is used (not so much at the events as in written materials) when outsiders might see the situation quite differently.

First a word about the non-partisan nature of each group, from their own written self-descriptions:

Metro Vancouver Alliance is a group of non-partisan, proactive, everyday citizens dedicated to making the Metro Vancouver area a better place for all to live and thrive. Our members come from faith congregations, youth groups, neighbourhood houses, union locals, co-ops, academic departments and community non-profits. (Go here for a fuller description of what MVA is about.)

We are non-partisan, and work to influence politicians of all major parties. We equip citizens to take back their rightful place as part of the decision-making process of legislatures and parliament, education and parent boards, and have their voices expressed in media. (Go here for more about Canada Family Action.)

When appropriate, Citizens for Public Justice (CPJ) engages in non-partisan political activity to seek a change in public policy. We communicate the results of our research and analysis to government policy-makers, including civil servants, MPs and parliamentary committees, primarily at the federal level. (Go here for a fuller account of what CPJ does.) 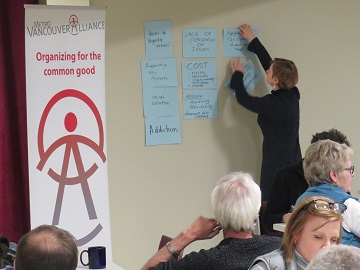 MVA organizers solicited input from those who took part in the Faith Caucus.

Metro Vancouver Alliance (MVA) is not a faith-based group. It is “a broad-based alliance of community groups, labour, faith and educational institutions working together for the common good.”

Almost half of the institutions are faith-based (though the union groups, in particular, would have larger memberships), and at the Faith Caucus most participants were Christians (especially Anglican, Catholic, Lutheran, United and Baptist).

The February 19 gathering provided an opportunity to get to know other MVA supporters from various faith communities, to offer suggestions and comments about MVA approaches and to consider possible future action. Housing was referred to often as a particular priority.

Reference was made to MVA successes, which were described in an update on the MVA website last November: 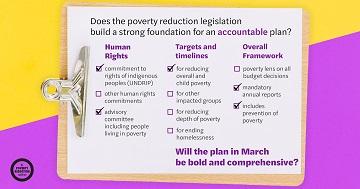 Government of British Columbia has kept its promise to MVA leaders to legislate a poverty reduction strategy!

In 2017, John Horgan and Andrew Weaver stood before 800 MVA leaders and committed to legislate a poverty reduction strategy. This week, the legislation passed unanimously!

Congratulations to MVA leaders, BC Poverty Reduction Coalition and the thousands of British Columbians who worked tirelessly for over a decade to make this happen! A huge win for the common good. Now the real work continues in encouraging a bold and comprehensive plan to be announced next year!

Leaders of the Faith Caucus said that, even as we met, an MVA representative was over in Victoria at the provincial government’s budget lock-up. A February 19 report on the budget by that MVA member was quite positive, reading in part:

With an overall theme of affordability and helping families, MVA is encouraged by the spending priorities in today’s provincial budget which address the affordable housing crisis, access to transit, access to healthcare, and income inequality in British Columbia.

The report pointed out “how the budget aligns with our priorities” in four categories: Economic Justice, Affordable Housing, Accessible & Affordable Transit and Community Healthcare, and concluded:

This was MVA’s first invitation in the budget lock-up. This recognition is a testament to the power of the work we are doing together. Although there is more to do, we are pleased to see the provincial government engaging with civil society organizations. We will continue to build on this momentum.

That positive attitude to the work of the NDP/Green government was clearly reflected in the room. 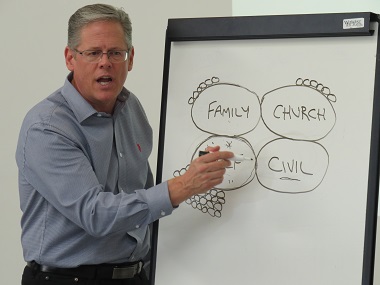 Doug Sharpe, president of Canada Family Action, was a keynote speaker at the Canada in Crisis gathering.

Doug Sharpe, president of Canada Family Action, made the major presentation during the Canada in Crisis event February 21.

Noting that he had worked as constituency assistant for Conservative Party Cabinet Minister Stockwell Day, and that Canada Family Action had been quite politically partisan, he pointed out that their approach has changed of late: “I was an aggressive loyalist to one political party, then I took a shift.”

Now, he said, Canada Family Action is focusing more on encouraging moral and traditional values, working in a non-partisan way with like-minded people and groups.

The topics and issues he highlighted were the Canadian Charter of Rights and Freedoms (compared to the Bill of Rights), Canada’s debt (dangerously high), marijuana sales (predatory approaches), euthanasia (law doesn’t protect the vulnerable), gender / sexual orientation (Public Health Agency of Canada has an agenda), abortion (no law at all), adoption (Christians families sometimes not wanted) and diversity (but not for orthodox Christians).

In other words, issues that play well on the conservative end of the political spectrum. 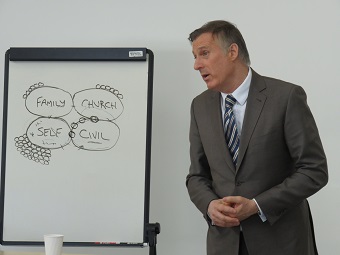 There was also a surprise visit by Laura Lynn Thompson and Maxime Bernier, the candidate for Burnaby-South and leader respectively of the newly formed People’s Party of Canada.

He was in town to give her some support in the waning days of the by-election won by NDP leader Jagmeet Singh on Monday. (Though she did not win, as Bernier predicted during his stopdown at Cariboo Road, she did gain almost 11 percent of the vote.)

They were invited not by Canada Family Action, to be clear, but by the organizers of the event. Bernier and Thompson were warmly received and sent off with a time of prayer.

Those in attendance at the Canada in Crisis event were Christian leaders, particularly pastors of charismatic, Pentecostal and independent churches, I would say, including a number from intercultural or ethnic churches. 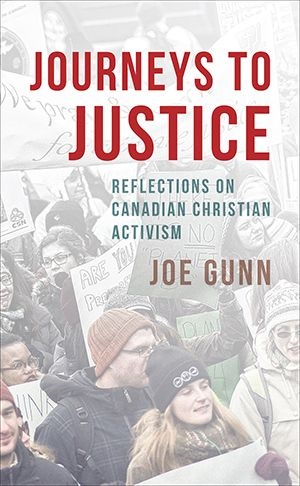 Shortly before stepping down as leader of CPJ last fall, Joe Gunn released Journeys to Justice, a book which made the point that:

Christians in Canada have made a huge impact on key justice issues over the past 50 years, in a wide range of areas: education, economics, refugee sponsorship, the environment, apartheid in South Africa, domestic violence, public health care, cancellation of the debts of Global South countries and much more.

Gunn fears that momentum may have been lost and hopes to reach the next generation (he wrote the Introduction to his children).

There is indeed much to be proud of in this book, which should be read by anyone interested in affecting the political culture of Canada.

Having said that, one would have to take note of the fact that the issues addressed are ones usually embraced on the liberal/left side of the political spectrum. I have always regretted that CPJ would not take a stand on issues such as abortion and euthanasia, for example. 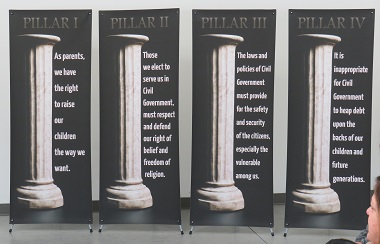 Doug Sharpe said that since 2016, Canada Family Action has sought more to serve the church than to win people to a particular point of view.

To that end, and after having sought input from many faith leaders, they have come up with Four Pillars which express their basic convictions:

There is a lot to be said for these general principles, though I am far from convinced that all groups of Christians concerned with the public good would come up with exactly this list. Just to take one example, some might be less focused on the need for protection from Civil Government and more concerned about climate change.

However, Canada Family Action’s focus on basic principles instead of particular political agendas could be a positive sign for the future, especially if they and other groups with similar purposes would be willing to continue to work on those pillars as they meet with Christians who have different priorities.

I didn’t see much sign of overlap – or mutual awareness – as I sat in on the MVA Faith Caucus and the Canada in Crisis conference, and that’s unfortunate. Both groups are attempting good things. I applaud them, but I also worry that each is too much at ease in certain political circles and not focused enough on the biblical principles that would underlie a really robust Christian response to the social ills which continue to beset our culture.

There is no surprise in the fact that Christians support a wide range of political movements and parties. It was ever thus. The New Democratic Party and the Social Credit Party (later morphed into the Reform / Conservatives nationally and Liberals locally) each had strong Christian bases. Differences between Christians who are involved in politics will continue, but an increased awareness of shared values is possible.

← Seeking the kingdom of God as a church in a post-modern age
Mike’s story: UGM’s Mobile Mission ‘gave me my life back’ →